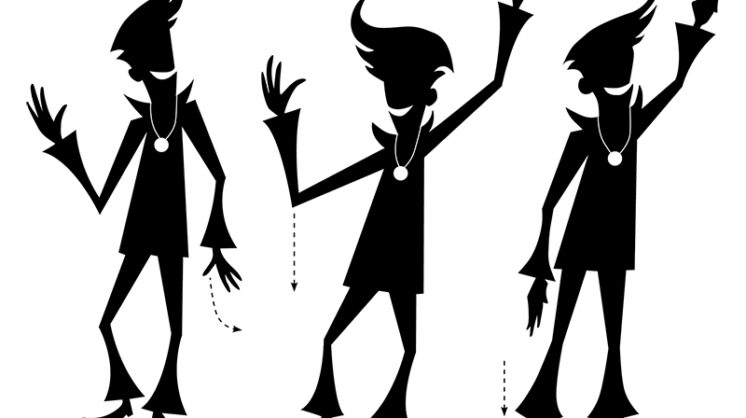 “There’s no easy way to tell you this,” I told The Beau recently, “but when you dance, I don’t know if I should give you the Heimlich or a helmet.”

Anyone else might have been crestfallen to hear such an indelicate remark. The Beau, on the other hand, kicked his dance moves into overdrive, becoming more emphatic with each arm-flailing spasm, as if to show me what I must be too blind to see. “Never had a lesson!” he proudly proclaimed, as if there had been any doubt. Why did I have my arms up to protect my face, he wanted to know.

Channeling his inner Deney Terrio on the glittery dance floor of his mind, The Beau belongs to a very crowded demographic of “Guys Who Can’t Dance but Insist on Doing It Anyway.” Any early FM Top 40 hit can set him into motion, triggering a series of jerking movements that are best kept from public view if he doesn’t want someone to try to keep him from swallowing his tongue.

In fairness to The Beau and to the rest of his gender, I’ve never really known a guy who can dance. I’ve known a hundred who think they can dance, and even more who confuse being on a dance floor with dancing. That’s not to say that men corner the market on arrhythmic convulsion when the music starts, though; plenty of girls were absent on Rhythm Day.

One of my friends told me that, in high school during the ’80s, he’d had a mad crush on a girl all year. At a school dance, stars were aligning. There she was, a goddess. The embodiment of grace and all things lovely. During the bass-thumping intro of a head-banger song, he mustered the courage to ask her to dance with him. She accepted the invitation with a smile, followed him to the dance floor and immediately broke out a move that most closely resembled a pantomime of a raging mental patient, intent on banging against an imaginary floor-to-ceiling window until someone came to set her free. “And that really got me over the crush,” he says.

I think the goddess/escapee was a victim of her decade where dancing is concerned. I’m convinced that the early dance floor is where people freeze in time. You never really see people transcend their respective decades when the music starts again. Given the opportunity and the first four notes of the same song, the window banger almost certainly would bang the window again. Bangers gonna bang.

If every generation came together on a single dance floor – at a wedding reception, for example – an onlooker could sort the dancers by decade without ever looking at their faces.

No matter what the band is playing, the oldest dancers in the crowd are the easiest to please. This group will default to the Foxtrot, but they’re just as willing to break out the Cha Cha, the Mashed Potato or the Hokey Pokey – all dance steps that allow for the easy extinguishing of a cigarette butt with a foot.

Those whose maiden trip to the dance floor happened during the 1970s, God help them, will have been irreparably imprinted by the Funky Chicken or by John Travolta. This group is most likely to extinguish a cigarette butt on the dance floor with their own butts.

No matter what the band plays, dancers from the ’90s think, “Hammer time!” They’ll need the entire span of the dance floor, and they’re most likely to punch or kick someone with their Running Man arms and legs.

If you learned to dance in the early 2000s, first, you have everyone’s sympathy. By all accounts, the Aughts-era dance floor left no room for the Holy Spirit; every dance involved spooning. If we really are permanently shackled to our earliest dance moves, you guys might run into some restraining orders if you try to dance outside your demographic.

The latest group to join the dance needs no introduction. They don’t dance as couples or individuals, but as a tangled ball of snakes, lighting up the dance floor with the collective glow of their phone screens. No matter what the band plays, they’ll shake it to whatever’s streaming on Spotify.