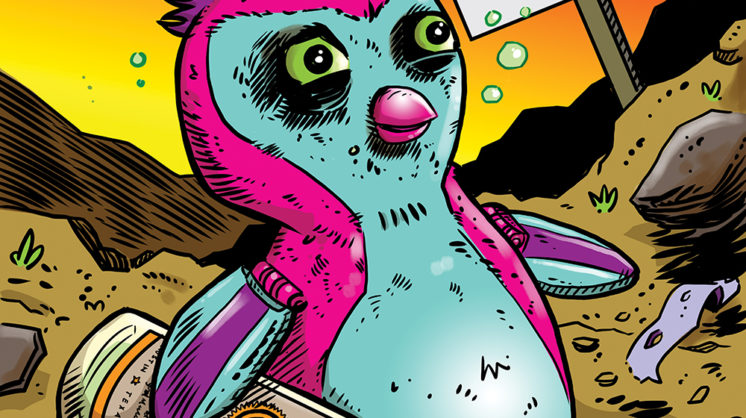 If you’ve read this column during any previous December, you’ll recognize my tried-and-true(ish) pattern of saving up all my excitement for Christmas until mere days before the big, blessed event. I say, why not concentrate all the ill-behaved crowds-in-my-bubble, plagues of bad drivers and hasty decision-making anxiety into one big holiday clambake?

I stand firmly in the camp of shoppers who know they’re searching for gifts for people who don’t need one. more. thing. On my Big List of Dread, holiday shopping ranks slightly higher than waking up during a colonoscopy. Still, I don’t want to be the one who receives a gift (that I don’t need) without reciprocating with a gift (that the recipient doesn’t need).

For the past several Christmases, I’ve been easing my family into liquor-only gifts. By this time next year, it’s likely we’ll all be registered at Byron’s. For everyone else, however, I’ve canvassed the holiday landscape on Amazon in an unseasonably early pre-shopping exercise that I’m not likely to repeat anytime soon. I don’t expect to score a once-in-a-decade miracle, but I’ll settle (therefore, my recipients must settle) for just the right gift that says, “I’m so glad your happiness isn’t tied to this socially obligatory gesture.”

“Practical” describes Snittens, the Original Snot Mittens ($20; amazon.com), the absorbent solution to a cold weather-induced runny nose. In the competition for Gifts That Have a Not-So-Subtle Subtext, this gift is a worthy contender, right behind LED-lighted tweezers. The subtext for lighted tweezers is probably, “Look, man (ma’am), you’ve got hair sticking out in every zip code. You need to get on that. I got you the lighted tweezers so that even a power outage won’t be an excuse to put off what has to be done.”

The Snittens subtext is not ambiguous, either. It says, “Look, man (ma’am), I can see that tweezing all that nose hair caused a secondary issue. You’ve got nothing to block the drainage from your nose. Here are some gloves that you can use as a Kleenex® until your nose hair grows back in.” It also says, “I don’t plan on shaking your hand.”

Another gift that boasts daily use is the call-it-when-you-see-it BS button (about $9; amazon.com), which lights up like Rudolph’s nose and announces, “That was BS!” or, “BS detected: take precautions!” when pressed. The wailing siren sound effects ensure that anyone within earshot will be alerted to malarkey in their immediate area. Perfect for office use, or to keep within reach during televised political debates.

The recent removal of one of Amazon’s most practical gifts, the Imaginary Friend ($10; no longer available – sorry, buddy), has redirected the attention of the lonely marketplace toward what is predicted to be the hottest, if not the least practical, gift of the season: Hatchimals (prices vary wildly, depending upon your level of desperation or poor judgment).

Undoubtedly the Christmas morning fantasy of every 7-year-old girl, Hatchimals are collectible toy animals, encased in a plastic egg that can’t hatch without constant interaction and attention from the owner (an ownership requirement previously reserved for iPhones).

According to the manufacturer, the Hatchimal actually pecks its way out of its egg after indicating (with its rainbow eyes aglow inside the egg) that it’s go-time. Once it hatches, the Hatchimal must be “raised” through three stages of maturity.

Details on the product description were vague, but it’s likely that the three stages of maturity are 1.) “I must have a Hatchimal for Christmas!” 2.) “Christmas will be ruined if I don’t get my hands on a Hatchimal!” and 3.) “I’m taking that Hatchimal money down to Byron’s, and I’ll thank you to keep your Snittens off the Tito’s.”