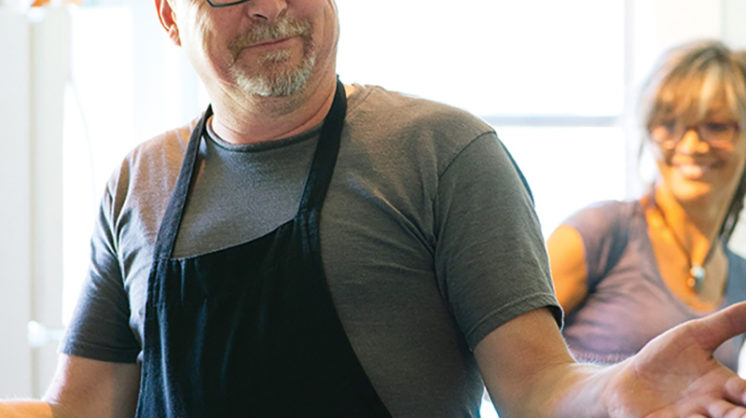 In An Era When Social Media Is Ubiquitous, One Of The Unanswered Questions Is How To Translate Social Media Connections Into Physical Bodies Purchasing Real-World Goods. Larry Dean Pickering – the middle name is a necessity for those who know him – has managed to harness something within his social media community, such that his work in the “tiny ass kitchen” has moved from the pixels of Instagram to dinners at some of the metro’s best restaurants.

Pickering insists on lower case when he posts about his tiny ass kitchen, so technically, it’s his brand. The space in question is a six-foot by eight-foot area in a garage apartment in Midtown. Based on the dimensions, the name makes perfect sense, and that’s where Pickering works through all his recipes, including the ones he featured at The Metro Wine Bar & Bistro in January and February.

“I embraced social media from the very beginning,” Pickering said. “There are downsides, but it is still capable of building an incredible community.”

His social media community consists of more than 5,000 people across three platforms. That’s a substantial number for a non-corporate brand or a non-celebrity. Many of those followers are face-to-face friends, but thanks to his food postings from the tiny ass kitchen, he now has followers, including chefs, from around the world.

Exactly how he has amassed such a following and then converted it into real-life diners is a bit of a mystery. Pickering is not the type to read a “best practices” manual on social media; however, what he does do well is move around town, and wherever he goes, he tends to meet people – loves to meet people, in fact. He is a shameless extrovert in public, and that impulse toward socialization drives some of the ideas behind the tiny ass kitchen.

According to Pickering, “Food is a social event. It used to be, I guess. We seem to have lost that social aspect, and social media is partly responsible, but I think people are gravitating back toward connectivity.”

Connectivity around meals is a stock cultural reference, and in truth, many of us did grow up with family supper where real parents asked real questions about our days. Fast food gets a disproportionate chunk of the blame, but to be fair, the food is fast because it’s prepared quickly. How one chooses to consume it is completely up to the diners themselves.

“Other cultures are very food-centric,” Pickering said. “Meals take time, both in preparation and dining. When I was in Italy, I saw how they treated a meal as an event. We tend to have a burger in the car on our way to being busier.”

The family meal, in his mind, can be translated into an extended family. The world we now inhabit – in fact, the city we inhabit – is full of singles and divorced people and transplants. Our families are scattered, so we look to friendships to replicate family connections.

“I have a need for people in my life,” reveals Pickering. He has lost both parents and a sibling, so his family is augmented by a host of friends. “Food is a great way to cultivate the friendships I need. The meal becomes a chance to foster an intimacy that we all need. Food is the vehicle.”

Rather than just post pictures of his food, whether in the tiny ass kitchen or at the table surrounded by friends, Pickering stages his photos. His creativity comes from a place grounded in his own natural gifting and his upbringing. He has been sculpting with steel and designing furniture since the early 1990s, and one of his installations was recently featured at Oklahoma City University’s Norick Art Center.

“I just think creatives have to create or go crazy. When I started cooking, the creativity was a natural extension of me as a creative type.”

Instagram is one of the hottest platforms now, especially since millennials largely abandoned Facebook when their parents and grandparents started using it. Unlike other platforms, Instagram is based on images and when it comes to images of food, the connection is simple: most of us eat with our eyes before we taste.

However, it is not as if Pickering is the only one trying to leverage social media to create real-world impact. What has to happen for someone who posts food pictures from his tiny ass kitchen to sell out two dinners at The Metro? Some of it is force of will and endless unintentional marketing. He is just making friends, after all. He has cooked at Power House, as well, and a dinner is scheduled at Rococo as of this writing.

The restaurant gigs are fun and exciting, but Pickering loves the monthly brunches he hosts in his home even more. He is a product of a mother who was a practitioner of a tradition that seems to be dying in our hyper-modern, excessively busy culture. She regularly had people just drop by.

“Ms. Mary, as everyone called her, kept coffee on all day,” Pickering reminisces. “I remember when a friend dropped by one day, and after the visit was over, my mom told me she hadn’t seen that person in 25 years. They still knew they could drop by, though.”

The brunches in his home are his homage to his mother’s hospitality, but they also express his conviction that relationships are the most important thing. “They are everything,” he said. “It’s our interconnectedness that makes us human, and our true cultural history are the stories we make with our lives.”

Those are the stories he likes to share and likes his guests to share during those last-Sunday-of-the-month brunches. He prepares brunch in the tiny ass kitchen, and then serves it “al fresco” at a community table.

“We’re all pilgrims on a path,” Pickering said. “The brunches allow us to tell our stories, share our journey, and get to know each other.”

He is adamant that guests follow the rules, though. They are quite simple. “Send me a message to let me know you are coming, and then come over and eat.”