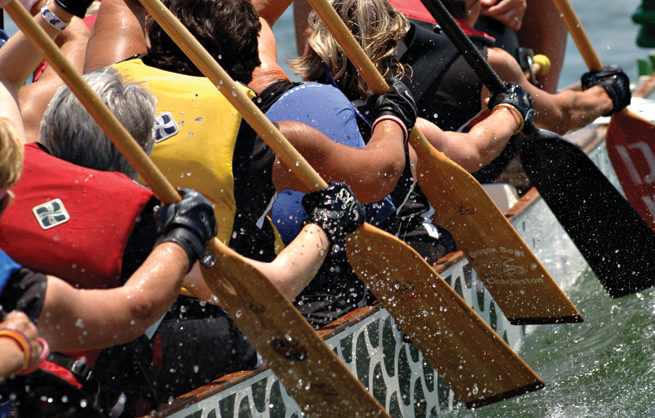 Sitting in a doctor’s examining room, with a paper gown strategically draped and a cold draft up your backside, is not one of life’s most pleasant experiences. But it’s a piece of cake compared to sitting in that same examining room and hearing a doctor nonchalantly say he needs to test you for cancer – ASAP.

Hearing the “C” word first hits you in the gut, and then travels upward. When your mind finally grasps reality, it is hard to process. You have the tests and then you wait. For those of us who have been through the drill, the relief is beyond words when you hear the results were negative. For those who weren’t that fortunate, words can’t express the mind-numbing fear that grips you.

Yes, dragon boats – those long human-powered watercraft that go back 2,000 years to ancient China. In case you hadn’t heard, dragon boat racing is sweeping the country as a form of therapy for cancer patients and survivors.

A new documentary is hitting theaters this summer, produced by Oklahoma native Liz Oakley. Originally from Bartlesville and a graduate of the University of Oklahoma, Oakley has focused her lens on this growing endurance sport. The result: “Awaken the Dragon,” a 90-minute film detailing the rise in popularity of dragon boat racing and how it is empowering cancer survivors.

“The sport has been around for thousands of years,” Oakley said from her South Carolina office. “But it wasn’t until the 1990s when physicians began using it as a form of therapy for cancer patients.”

“I think everyone will leave the theater with something a little different,” Oakley said. “I think it depends on who you are and where you are in your life journey.”

Years ago, there was a belief that upper-body exercise could cause or worsen lymphedema, a painful swelling of the arm experienced by some breast cancer survivors. A small research study was developed to challenge that belief, and the first-ever cancer survivor dragon boat team emerged.

“Pairing cancer survivors and dragon boating may seem unlikely,” Oakley said. “But the sport actually symbolizes man’s struggle against nature and a fight against dangerous enemies. Participants, whether recovering from an illness or not, can draw strength and encouragement from the metaphorical aspects of dragon boat racing.”

Since those early days, teams of dragon boat racers have been established throughout the world. Oakley’s new documentary takes a look at people who are all in the same boat, so to speak.

“I first came up with the idea for this film when a friend told me cancer survivors were paddling dragon boats on the Ashley River in Charleston,” Oakley said. “At that time I had never heard of dragon boating. I went down to the dock and within moments I was captivated by the story of the first paddler, and I saw firsthand the beauty of the sport.”

Oakley says she was looking for a compelling topic for her second feature documentary, one that could possibly change lives. That’s when “Awaken the Dragon” was born.

“Many of dragon boating’s time-honored rituals, such as the ‘eye-dotting ceremony,’ are still practiced today. That involves painting the eyes to ‘awaken the dragon.’ That ceremony will cleanse and bless the event, and impart the strength of the dragon on the vessel and the crew,” she said.

The past six years have been a whirlwind as Oakley traveled the country-developing a passion for a sport that was growing right before her eyes. She followed a fledgling team, profiling their strength, courage and survival.

“I think everyone will leave the theater with something a little different,” Oakley said. “I think it depends on who you are and where you are in your life journey.”

For those battling the Big C, dragon boating offers a real sense of empowerment. And it’s a phenomenon taking shape right here in Oklahoma City at the Chesapeake Boathouse.

“We offer dragon boating during two seasons,” said Sherry Andrusiak, Director of Media Relations for the Boathouse. “It’s a very easy sport to learn, one that requires minimal instruction on land. It is great for those with mobility issues, because it is a low-impact, non-contact sport. It’s also perfect for team building and learning to work together.”

“I don’t think about life the same way after spending the past six years with these unique individuals,” Oakley said. “I don’t think about death the same way. There are lessons for all of us, regardless of what’s written on our medical records. We shouldn’t have to hear the words ‘you have cancer’ to start living our best lives. I hope this film inspires others to stir their own slumbering powers.”

“Awaken the Dragon” hits Oklahoma City for two showings at the deadCenter Film Festival: Friday, June 8 at 6pm and Sunday, June 10 at 3pm at the Harkins Bricktown Theatres. deadCenter Executive Director Lance McDaniel praises Oakley for taking a very serious subject and turning it into an uplifting piece of art.

“That’s one reason we are so excited to show it,” McDaniel said, “because Liz doesn’t present this as a fairy tale. It is a very realistic look at women and men pulling themselves into recovery and doing it in a very unique way.”

Oakley will return to her home state for question and answer sessions immediately following the film.