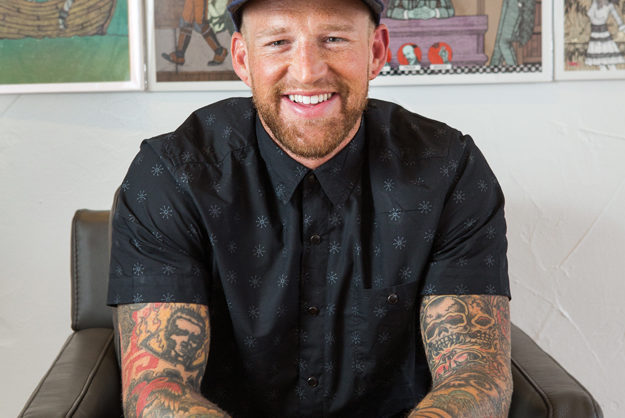 We expected Oswald, one of the state’s most popular t-shirt designers and the brains behind Bombs Away Art, to be just as unconventional as his art, but our exchange revealed an authentic, insightful artist who is as intriguing as he is down-to-earth.

Are you a native Oklahoman? Yes. I grew up on a farm in Apache, Oklahoma, a town of about 1,200 people.

You sure didn’t end up with farmer’s hands. Were you the kid in school who was constantly drawing? I did work on the farm growing up, but yes, I was drawing all the time. My notes were always covered with doodles. I’m fortunate that my parents and my teachers encouraged my art.

Where did you go to college? Oklahoma State. I have a Bachelor of Fine Arts degree and a minor in Art History.

Congratulations on the new studio! How did the name come about? Dorshak Bloch is a pseudonym I use. I’ve enjoyed the name Dorshak for some time but I don’t recall where I came across it. Bloch comes from Robert Bloch, the author of “Psycho” and many science fiction stories that I happened across in old comics and magazines.

Your portfolio is really diverse. What will the gallery’s focus be? Mostly it will be my illustrations and some out-of-print t-shirt designs. I’m excited about having a channel to try some new things here, like limited editions of some of my t-shirt designs. I’ll also be inviting other local artists in from time to time.

Do you have anyone lined up yet? Yes. Oklahoma illustrator Jerry Bennett’s comic book covers will be featured here in October. In December, another artist named Tony Trammel will be showing his sci-fi art.

Is it fair to say your t-shirt designs have put you on the map? I’ve been designing t-shirts for years (as Bombs Away Art) and some of those have really taken off, especially my Osage shield, the warrior head and scissortail designs. Those have kept me busy.

Busy, because you provide the t-shirts to retailers? Yes. Early in my career, I designed t-shirts and sold them to retailers in OKC, Lawton, Dallas and Austin, among others, and I still do that now.

Who took a chance on your designs first in OKC? Blue Seven at North May and Grand. They still carry my shirts and they’ve been great to me.

Where would you like the opening of the new art gallery to lead? I hope it will lead to an opportunity for me to get to create a drawing and produce something meaningful every day.

Your illustrations are so intricate in their design. You’ve worked in a lot of animals. What’s that about? I’ve used a lot of deer, wolves, foxes, alligators and crocodiles in my work. I like to present ordinary things in a less-than-obvious context.

Besides the opening of your Paseo studio, I understand you’ll be busy elsewhere this fall. I’ll be traveling to several trade shows and comic book conventions, which are really good venues for illustrators like me. I’ll also be promoting my new graphic novella, “The Story of Ivan A. Alexander – Ivan the Innocence,” which I published under the Dorshak Bloch pseudonym through Literati Press in Edmond.

What’s the best advice you never took? “Always quit one before you think you should.”

Which trait could you do without? Being a perfectionist. It can really get out of hand.

Do you have any recurring dreams? Yes. I’m in a small, white house and there’s a tree in the backyard with a light pointed on it. The tree is dying because at the base, there’s a rattlesnake buried under it and the snake is poisoning the tree. In the dream, I’m always looking for something I can use to get the snake out. Wowwwwww. That really strays from the “day of the final exam” dream people usually tell me about.

Which movie can you recite the words to? “The Big Lebowski.”

Do you have a favorite hole-in-the-wall in town? I only eat at local restaurants. I really like Cafe Antigua and Florence’s (east side). For a drink, I love Sean Cummings Irish Pub on North May.

What can they get you for your next birthday? A plane ticket to Japan.

Where would you like to be years from now? In Europe, maybe in Scotland in a castle somewhere, sitting in a tower and drawing everything I can see from there.