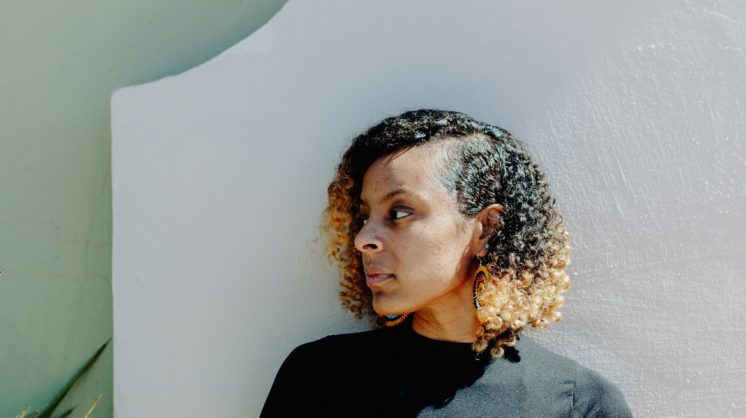 Ebony Iman Dallas had one shot to ask the great Harry Belafonte a question when he made a rare public appearance, this one at the University of Oklahoma, where Dallas, an OKC-based visual artist, was teaching at the time.

“I asked him about the challenge of being a Black artist – the desire to create something that is just beautiful versus something that is also meaningful,” she says. “He answered, ‘Art without substance is not art.’”

The brief interaction confirmed her direction as an artist: to create beautiful, expressive juxtapositions of hope and struggle, using bold colors, textures and vibrant media like gold foil to communicate the realities of Black existence in the U.S. The loss of her father, Said Osman, before she was born – he died under mysterious circumstances – set her on a path to understand what had happened to him and to explore portrayals of Blackness in popular culture.

“I use (gold foil) halos to exalt a person,” she says. “I used gold paint for a long time, but gold leaf is more vibrant. I use it to highlight the innocence of people who often are not portrayed in media as innocents, nor seen as capable of innocence.”

Dallas’s use of color is nearly always symbolic. She’s not shooting for photorealism, so skin tone is less important than what the color she chooses conveys. “I use fiery colors – yellow to red – to convey the spirit of a person. Their skin tone doesn’t matter as much for me.”

The bright, bold colors are also meant to convey a sense of hope. “I want to inspire hope in people,” Dallas says. “The subject matter can be serious, but the tone can still be uplifting, hopeful.”