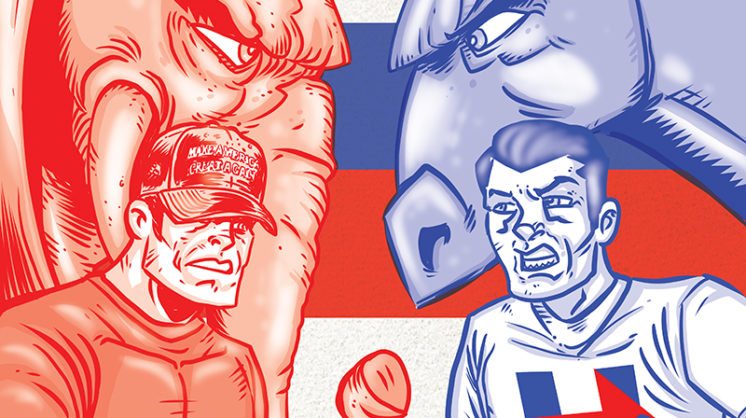 When Angela (not her real name) opened the housewarming “gift” from her sister, she found a print inside. Modeled on the famous Shepard Fairey campaign poster from the 2008 Obama campaign, the gift had President-elect Donald Trump’s face in place of President Barack Obama’s.

The joke was not well received; the sisters had voted for different candidates in the presidential election. What should have been a pleasant Thanksgiving dinner devolved into tears, accusations, yelling and recriminations.

In the aftermath of the 2016 general election, similar scenes played out around dinner tables all over the country. Holiday dinners with extended – or even immediate – family have always been fertile soil for the cranky conservative uncle or the strident liberal sister to air political grievances, but this year seemed different, worse, more combustive.

Rather than disagree on substantive topics ranging from climate change to abortion to welfare, as has usually been the case, this election gave rise to accusations of supporting a rapist or condoning corruption. Racism, sexism, xenophobia, greed – a taxonomy of awfulness – became the topics that framed the election cycle. More than any election in recent memory, this one seemed to polarize families and friends with astonishing effectiveness.

After it was over, the celebration or the grieving began, and the losing side was forced to confront how to move forward. While this is the case after every election, the verbiage and attitudes were different this time. Talking across the division seemed nearly impossible. But is it possible? Can we move forward? Must our friendships and family relationships be in lasting jeopardy?

Jon Middendorf is the senior pastor of Oklahoma City First Church of the Nazarene. As such, it is his task to heal divides between people, even people within his own family and church.

“I do believe we’ve just seen the most bitter, divisive campaign the country has experienced in recent memory,” Middendorf says. “Why? I’m not sure, but I’m convinced it has something to do with the religious energy pumped into the rhetoric.”

Post-election, America was told that 80 percent of evangelical Christians had voted for Trump (some holding their noses), many because they believed he would stack the Supreme Court with pro-life justices. For Middendorf, the rhetoric was shaped by the religious context. From within that framework, just as within the framework of families – religious or not – sides were drawn.

“Each side claimed Christ and fought as if God’s future was at stake,” Middendorf muses.

Such a strategy can leave both victor and vanquished feeling as if something apocalyptic is on the line. That can make loving an enemy – something Middendorf believes is central to Christianity – very difficult.

“I don’t, I can’t, start with love,” he says. “The best I can hope for is the kind of listening that leads to empathy, then respect and finally love. I have to listen to my enemies and opposites and consider that he or she holds the positions as tightly and honestly as I hold mine.”

Jordan Hobbs is a 24-year-old graduate student in marriage and family therapy. Hers was not just an academic experience of the election’s aftermath, though. She grew up Southern Baptist, and her family still attends a Baptist church. She is a Christian, but no longer Southern Baptist.

“I am trying to tell myself that people who voted for Mr. Trump voted for the party,” she says. “They said they did; they said party, not person. I’m trying to understand both sides, but as a woman, it’s hard to know young women and victims of sexual assault heard the things he said.”

Hobbs said she’s trying to believe that just because people she loves and cares about – and people who call themselves Christians – voted for President-elect Trump does not mean they embrace all the candidate endorsed.

“Don’t allow yourself to be baited into an embarrassing, no-win, scarring, future-shaping confrontation. It’s not worth it.”

Adam Soltani is the executive director of the Council on American-Islamic Relations (CAIR) Oklahoma. Given candidate Trump’s statements on the campaign about immigration and Islam, Muslims were and are concerned about a Trump presidency. Yet Muslims must find ways to continue to live and work around people who voted for President-elect Trump, many of whom have less than positive ideas about Islam.

“Many things we do as a community were already working before Mr. Trump was elected,” Soltani explains. “Under a Trump presidency, there is simply more urgency and more clarity about the tasks of working together, broadening our coalitions and increasing the frequency with which we do work together.”

To facilitate the broadening – which means working alongside people who have different religious and cultural assumptions – Soltani said CAIR and Muslim leaders in Oklahoma are encouraging the state’s Muslims to tell stories of the good Muslims are doing in their communities. Friendship with non-Muslims is an even better strategy, Soltani believes.

“When people have personal interactions with Muslims, when they see that we want many of the same things, it greatly reduces their fear and misunderstanding,” he believes.

CAIR’s overall communications strategy is to build personal and organizational relationships based in sincerity, and with the understanding that people will have differences. What is required is working together on common goals. That’s a solid strategy for religious and non-religious people in general.

Garron Park is the fiancé of Hobbs, and he too is a graduate student, but in education. His undergraduate degree was in political science, and he uses his background to help build and preserve sincere relationships.

“I try to understand that the point is not to change someone’s mind,” he says. “If you are simply trying to change the other person’s mind, there is a chance of damaging the relationship.”

Park didn’t vote for either candidate. He said he could not in good conscience vote for either. As such, he is positioned to talk to friends and family on both sides of the results. At home for the holidays he has been a moderating voice; his family was pretty evenly split on whom they chose as a candidate.

“It has been divisive,” Park says, “but when I talk to people, I discover they voted for a candidate for one particular issue, or because the other candidate embraced something the person simply could not support. With that in mind, it’s possible to find common ground, especially when people learn that someone is not endorsing either candidate’s positions fully.”

The answer is not as satisfying as we would like it to be. We might have all been better off if the most divisive issues were perceptions of how boring Al Gore is or how loudly Bernie Sanders talks. In this election, though, we were left with two candidates, both of whom presented substantial problems as presidential candidates. Decent human beings voted for both options.

But what about the other humans with whom we must contend, the voices at the dinner table who are only trying to provoke conflict?

“I try to divert the conversation away from abrasive phrases, those words people use that are meant to hurt or score a point,” Park says.

If the shot across the bow is a housewarming gift or a snarky comment, Middendorf also suggested steering away from it. “Change the subject, for the sake of the relationship. Maintain the connections in the hopes of having a series of conversations that will melt icy divisions. If the other won’t allow it, try to limit the shrapnel by avoiding landmine topics. Don’t allow yourself to be baited into an embarrassing, no-win, scarring, future-shaping confrontation. It’s not worth it.”