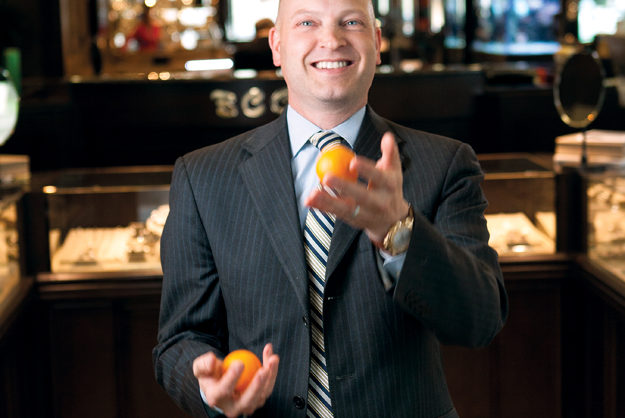 AS THE TRADITIONAL MONTH FOR WEDDINGS, June calls to mind our favorite trappings for glad occasions – mostly, the sparkly sort. Who better than Coleman Clark to tell us a thing or two about celebrations?

As president of BC Clark Jewelers in Oklahoma City, Clark has a role in decorating many a left hand, as three generations of Clarks have done before him. But when we learned that Clark is also a father of four daughters, we instantly imagined four very lucky left hands – no doubt, to be decorated in Junes to come.

First things first – what does the “B.C.” stand for?
Benton Clyde.

And Benton Clyde would have been your … great grandfather.
His son, BC Clark Jr., is my grandfather. We recently celebrated his 100th birthday over Easter weekend.

How old is the jingle?
We think it’s the longest-running jingle in the U.S. 57 years.

What’s it like to be connected to what most Oklahomans consider to be a Christmas standard?
Surreal.

I heard once that the advertising agency wanted to change the jingle at one point.
They actually did produce a new one many years ago. It aired for one day. We had so many complaints, we put the old one back on the very next day!

Are you married?
Yes, to Melissa. We have four daughters.

FOUR girls?!
Besides waiting to get into the bathroom, what has having four daughters taught you? To like – or at least, to live with – pink.

Where did you meet Melissa?
We met in Dallas when we both lived there, but we learned that we’d previously lived right across the street from each other while we were at OU.

What were you doing before you officially joined the family business?
I worked for Sprint for several years.

What did growing up in the jewelry business teach you as a kid?
Gift wrapping, cleaning showcases and polishing silver! Years later, I went to Carlsbad, California, and earned my GIA (Gemological Institute of America) certification before returning to work here.

You’re sort of a professional day-maker! Is that the best part of your job?
Definitely – helping people celebrate happy moments in their lives.

Is your most treasured possession a piece of jewelry?
No. It’s actually a video that I’ve never actually seen. Each year, my wife and I shoot two or three minutes of video wherever we’re traveling to celebrate our wedding anniversary. One day, we’ll put it all together and have a good laugh watching it.

That’s very sentimental. Are you sentimental about anything you no longer have?
Yes. I used to have a little metal flip calendar that I loved. I gave it to my brother Mitchell and sometimes I wish I’d kept it and given him something else!

Mitchell Clark – are you reading this?

What else is hard to live without?
Dr Pepper and dark chocolate. Sometimes I give those things up for Lent.

Are you Catholic?
No, but occasionally I’ll give up things for Lent anyway. After I gave up Dr Pepper one year, I ended up drinking more Dr Pepper than I ever did before Lent!

Are you a good cook?
I can reheat really well!

Do you have any hidden talents?
I can juggle, but only with three.

What do you read?
I read the sports page every day.

What’s the last movie that made you cry?
I don’t really cry at movies, but sometimes my eyes well up – and unless a tear falls, it’s technically not crying! It was actually a comedy with Billy Crystal and Bette Midler called “Parental Guidance.” There’s a very touching moment in that movie.

Are you a night owl?
Yes, I’m often up past midnight.

What can’t you resist watching on TV?
Any kind of sports. OU, especially, and I always watch the Thunder when I can’t go to the game. But I’ll watch any sport – even if it’s the middle school girls’ Lacrosse state finals somewhere.

What do you value most in your friends?
Honesty. Being real.

Are you shy?
Yes.

What are you most grateful for?
Good health and being able to work in this business with my family. We’re lucky that we work so well together.

What advice would you put inside a fortune cookie?
Be nice.