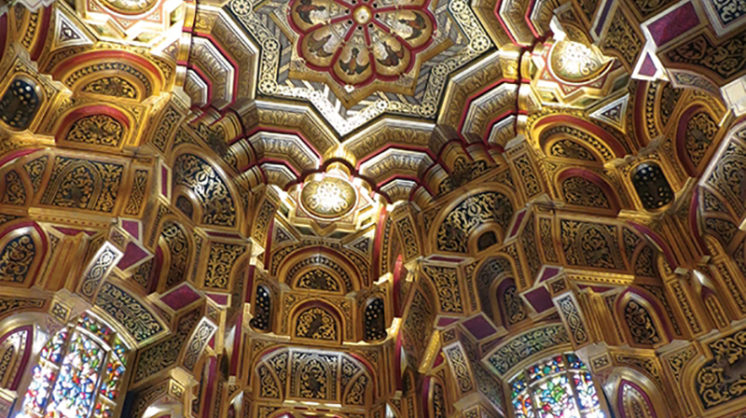 The night before we left for Wales, Jack, our daughter Zoe and I went to see “Pride,” a movie based on a true story and filmed in London and Wales.

In one scene, a group of Londoners are taken by Welsh friends to see a large castle perched atop a high hill. The climb up looked daunting — the kind of trek I wouldn’t want to make. However, with Zoe doing the driving, we did plan to visit a number of castles. Wales boasts 641 former royal residences — more per capita than any other country. And so, we began our journey to see the amazing sights of Wales.

Cardiff … The site of Cardiff Castle was originally a first-century Roman fort. The castle we see today was built after the Norman Conquest. Small by more contemporary castle standards, it is a classic motte and bailey structure – a stone fortification topped with crenellations sitting on an earthen mound. An enclosing wall surrounds a large area around the castle.

In medieval times, an extensive manor house was built into the west wall. In the late 1800s, the third Marquess of Bute had the manor house renovated into a Victorian interpretation of a medieval Gothic fantasy manor. Complete with a two-story banqueting hall, the manor was the site of a grand banquet for the 2014 NATO Summit with a guest list that included President Obama.

Each room of the manor has a different theme and is elaborately decorated with murals, carvings and painted tiles. Sixty kinds of marble decorate one of the bathrooms. Atop a tower is a Roman peristyle garden with mosaics worthy of the wealthiest Roman. The most flamboyant room is the Arab Room, whose stacked honeycomb-style ceiling is covered with 22 karat gold.

… And Vicinity A true do-not-miss attraction just west of Cardiff is the National History Museum at St. Fagans. This living history complex covers 100 acres and features over 40 re-sited, restored and furnished historic structures spanning several centuries from all parts of the country. The Kennixton Farmhouse was originally built in 1610. Painted bright red to ward off evil spirits, it’s one of the most colorful structures, which range from a circular pig sty (1800) and 1916 Workmen’s Institute to a terrace of ironworkers’ houses.

One of the few structures original to the site is St. Fagan’s Castle. This 1580 manor house isn’t a castle – just built on the ruins of one. The period of the décor is late-1800s/early 1900s from when it was owned by the Windsor family. Old photographs helped recreate the furnishings in some of the rooms, and some of the pieces are original to the family. The castle gardens include glass houses where much of the estate’s food was grown and a variety of formal flower gardens. The Italian Garden was laid out in 1902 with terraces, flagstone paths and a water feature.

A short distance from St. Fagans, Castell Coch is another castle which belonged to the third Marquess of Bute – then described as the richest man in the world. Incorporating the ruins of a 13th century castle, he had another fantasy castle built – like Cardiff Castle, lavishly furnished and appointed. Perched on a high hillside, the castle is certainly scenic, and provided a great location for a “Doctor Who” episode in which it represented a Venetian palazzo.

Carreg Cennan The sky was overcast when we left Cardiff on our way to Aberystwyth on the west coast. We planned a stop at Carreg Cennan Castle about an hour and a half northwest of Cardiff in the far west part of Brecon Beacons National Park. The roads became more narrow and the terrain more hilly as we approached the turn-off. The day had turned chilly and it had started to drizzle. We walked through a gate and into a farmyard. In the distance, up the hill we could see the ruined castle. It was the castle from “Pride!”

Zoe, who loves ruins, was excited. I was already cold and wet. I turned the camera over to her and headed inside for warmth and hot cocoa. Undeterred by the weather, she climbed the hill and explored the remnant of the 13th century fortress, dubbed “Wales’ most romantic ruin.”

In retrospect, I regret being a sissy, but at the time, comfort trumped curiosity. Jack and I did enjoy visiting with Margaret and Bernard Llewellyn and hearing the story of Margaret’s father, who bought Castell Farm and accidentally wound up with the castle, too. The Llewellyns have built a nice visitor center with a good restaurant, and raise heritage sheep and cattle on the farm.

Aberystwyth Little is left of the castle at Aberystwyth, but as a seaside holiday town, university site and the location of the National Library, it is definitely worth a visit. One of the highlights of our trip was the 12-mile Vale of Rheidol Railway excursion from Aberystwyth to Devil’s Bridge. The narrow gauge route takes visitors 666 feet up the hillside above the Rheidol River valley. A stop at the top gives guests time to enjoy hikes into the gorge with views of waterfalls and a historic triple-bridge. The bottom bridge dates back to medieval times; another bridge was built on top of it in the 1700s while the present bridge crowned the construction in 1901.

This is just the first leg of our trip: Next month we’ll explore northern Wales and more castles!

Cost was a definite consideration in planning this vacation. Most hotels and B&Bs are set up for two guests per room — and we were three. Airbnb was a life-and-money-saver. Sometimes our accommodations were in private homes; in several instances we had an entire house. Accommodations range from single rooms to castles, so the sky and your budget are the limit. For more information: airbnb.com