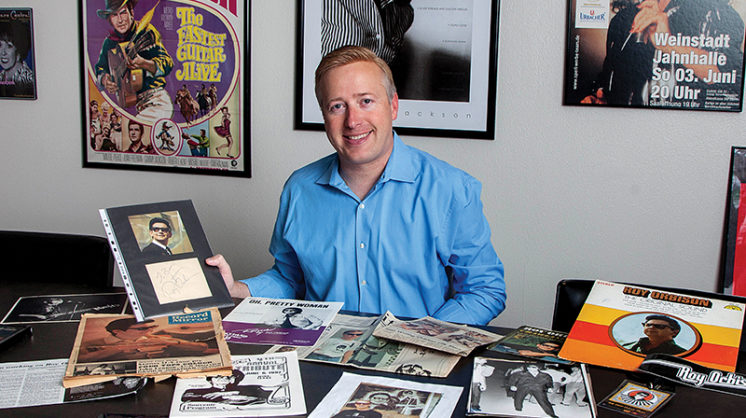 By day, Oklahoma County Commissioner Brian Maughan helps oversee miles and miles of the county’s roads and bridges. He serves on governing boards, including Emergency Management, the Planning Commission and others.

But when the workday is through, Maughan turns to his real passion, which is listening to and collecting music. He loves all styles but finds his favorite is classic country. In fact, much of his spare time is spent helping promote a couple of legendary Oklahoma artists who were already churning out hits before he was born.

As president of the Wanda Jackson Fan Club, the 39-year-old finds himself in regular contact with the Rock and Roll Hall of Fame’s “Queen of Rockabilly.” He also regularly coordinates social media for Blanchard’s own Grammy winner Jody Miller, and last summer helped organize the first-ever “Jody Miller Day” concert.

Are you a native Oklahoman? “Yes, I was born and raised in south Oklahoma City. My dad, Roy, ran his own heating and air conditioning business, and my mom, Charlotte, worked for Oklahoma City Public Schools as a bookkeeper. My best friend during my teenage years was a quadriplegic and was confined to bed for the last 13 years of his life. So one thing we did was collect music because it was something we could both enjoy since he couldn’t leave the house. We traded with fellow music fans all over the world that we met through music trade magazines, and that is how I got started collecting.”

When did music first have an impact on you? “I was 9 years old when I saw Roy Orbison perform on ‘Austin City Limits.’ I turned to my dad and asked who it was singing on TV. He said, ‘It’s Roy Orbison.’ I immediately said, ‘That’s my favorite singer!’ And he has been ever since.”

Oklahoma has turned out some great artists like Reba McEntire, Garth Brooks and Vince Gill, and more recently Carrie Underwood and Blake Shelton. But it was pioneers like Wanda Jackson and Jody Miller who helped pave the way. How did you meet them? “I first met Wanda when I was doing research for a book on Roy Orbison. I had developed a Facebook page called ‘All Things Roy Orbison,’ and eventually I approached Wanda’s husband and manager, Wendell, to ask if they would like to have a similar fan club. Wanda and Wendell both agreed, but it really grew to be much more than just fan club stuff. We’ve become very close friends and she’s taken me along to see several of her famous friends in concert.

“I met Jody Miller a couple of times before, but when Wanda had to take some time off to recover from knee surgery, Jody graciously agreed to fill in some concert dates for her. Today I help her fan club and the career activities she’s doing now.”

Both of these artists are involved in your SHINE Foundation. What is that? “It is an organization I started that rewards young people who complete 100 or more hours of voluntary community service before graduating high school or college. SHINE is an acronym for Start Helping Impacted Neighborhoods Everywhere. Thousands have participated all over Oklahoma, and the real phenomenon is how most of the kids don’t stop at 100 hours. This year, a Western Heights graduate set a new record with 1,102 hours. These young people are literally changing the face of Oklahoma.

“Wanda Jackson was one of the first people to ask how she could help. She performed the first [installment] of what has become an annual SHINE concert, raising money for the nonprofit. Merle Haggard did it the second year, and this year we had B.J. Thomas. Jody Miller had also heard about SHINE and wanted to get more involved. We taped the Jody Miller Day show she did last summer and sold DVD copies of the concert, with proceeds going to SHINE.”

What is your favorite memory having to do with the “Queen of Rockabilly?” “I had been working with Wanda for just a little while and she was well aware of how fond I am of Miranda Lambert. She made a special trip to see Miranda out in western Oklahoma just so she could make sure I not only got to meet her but got to visit for a good while. Wanda had to spend several hours and make a long trip just to make my wish come true. That’s about the neatest thing any celebrity could ever do for a fan.”

Speaking of Miranda Lambert, are you a fan of today’s country? “To me, there are very few bright spots in country music today. Miranda Lambert, Sunny Sweeney and Chris Stapleton are among the lone entertainers who are still attempting to perform what I call country music. Most of the new artists are blending together with not only their voices, but also the production in general. In the past, there were several types of sounds even in the same genre. For example, in rock and roll you had the Motown sound like Smokey Robinson, the Memphis sound of Elvis Presley and the Beach Boys were doing the West Coast stuff. Today, radio acts like it is a sin to vary too far from one sound to another.”

As a music aficionado, what’s it like to hang out with famous people? “Wanda Jackson, Jody Miller and Roy Orbison’s son Wesley have all made it possible for me to meet famous singers and all kinds of people from the music industry I could not have met otherwise. As exciting as that is for a music fan like me, I have to honestly say the best part of knowing them has been to be their friend. They all just happen to be among the nicest people you could ever hope to meet. It’s really great when your heroes turn out to be even greater than you imagined them to be.”