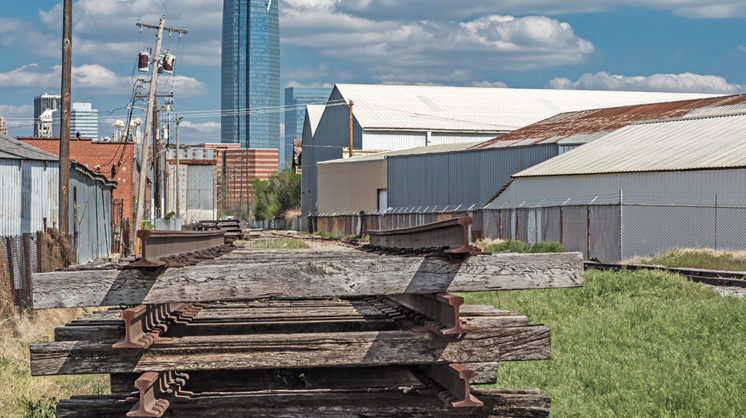 Development in the Ironworks District, located on the west edge of downtown, is almost underway. That may be the first time you have heard the name, and it’s true that references in print to the district are somewhere between sparse and nonexistent, but the neighborhood bounded by Western and Penn (east and west) and NW 10th and Main (north and south) has attracted a great deal of developer attention in the past year.

Property owners in the neighborhood asked local architect Mark Seibold to help with zoning issues last year with an eye toward improving the neighborhood. A LexisNexis crime map of the area shows a staggering amount of crime between Jan. 1 and the end of April 2018 – including sexual assault, murder and enough icons for burglary, theft and auto theft to nearly obscure the map beneath a collage of symbols.

“The property owners told me they had plans for the neighborhood,” Seibold says, “and that’s the first time in a long time that any developers have talked about that neighborhood. However, they were talking about development that took social justice issues into account, and you rarely hear that, so I was interested.”
Seibold, with help from commercial real estate adviser Ian Duty, arranged a charrette-style meeting at Stonecloud Brewing Co. in August 2017. Among the invited participants were Kim Woods, deputy director of The Homeless Alliance, and Laura Massenat, owner of Elemental Coffee and member of the Factory Obscura development team.

“After that first meeting, I had a feeling that we were all of a similar mind,” Massenat says. “We all seemed to want a walkable neighborhood with good lighting, a focus on the arts, security and good design.”

Massenat and her fellow team members have been looking for a new, permanent location for Factory Obscura, an immersive art experience similar to Meow Wolf in Santa Fe. As such, they are looking for a large facility that is scalable upward – to add floors – and that has outdoor space. The district is home to dozens of abandoned and occupied industrial buildings, making it a good hunting ground for what Massenat’s team needs.

“We really like the idea of the Ironworks District because we can get a facility that meets our need without displacing poorer people,” Massenat says. “We’d like to be art-focused without gentrifying the area.” 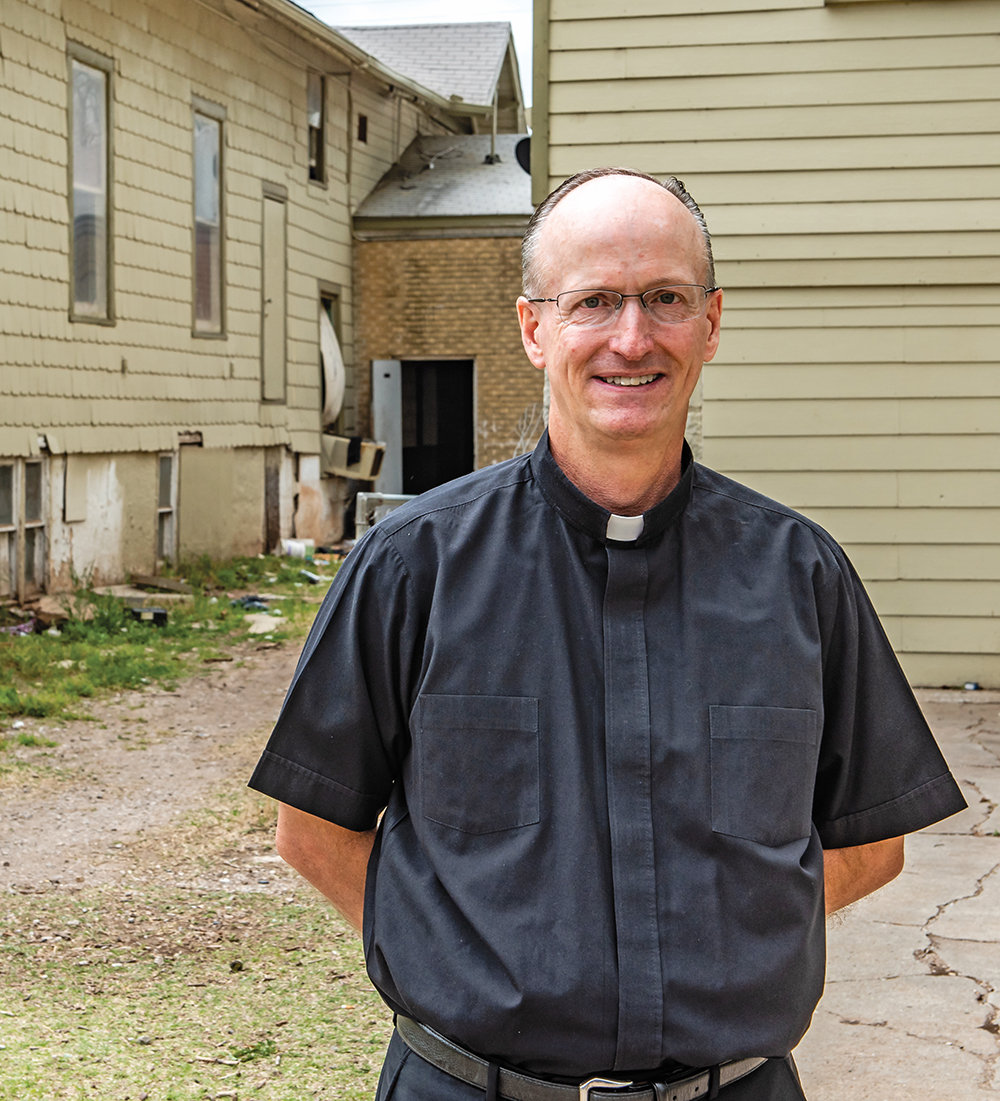 “By definition, what we are talking about is gentrification, but I think it can be done differently than in other areas of the city,” Seibold says. “First, I don’t think a TIF district on this scale would help, and I don’t really think it’s a good idea to raise property taxes on really poor people. This neighborhood has problems that are not going to be solved by architects and developers.”

In fact, two organizations are already in place to help with the problems Seibold references, and one was invited to the meeting and one was not.

Holy Angels Catholic Church was established in 1926, as a ministry of St. Joseph’s Cathedral in downtown. Currently, the parish has 1,200 member families for a total of more than 5,000 active members. Many of those members live in the neighborhood, and the overwhelming majority are Spanish speaking. In fact, its current pastor, Father Russell “Rusty” Hewes, said there is only one Anglo family in the parish, and that more than 99 percent of members are Latin American.

The numbers are moot, as there were no members of the church at the meeting, nor Spanish language materials, nor any representative of Holy Angels. They weren’t invited. We were referred to Ian Duty to ask about invitations, but Duty has not returned messages left on his answering service about this story.

Hewes, who has been the pastor for four years, said he is excited about improvements to the neighborhood. He referenced the death of three homeless people in January in an abandoned home on Blackwelder, just blocks from the church, as well as concerns about lighting. 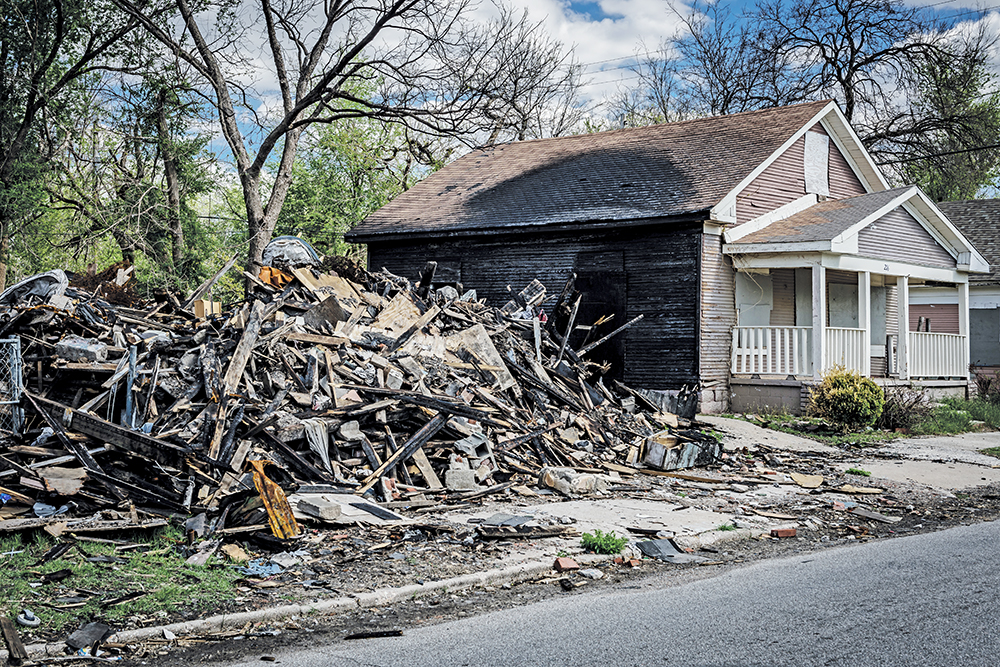 “Someone tried to break into my home just two weeks ago,” says Hewes, who lives in a clergy house on the church campus. “We also just purchased the old Methodist Church on 2nd and McKinley for a children’s ministry – we have more than 1,000 children in the parish – and we’ll need to put up a fence and good lighting.”

The church works with the homeless and the poor every day, providing benevolence in the form of food, clothing and help with utilities and the sundry needs that afflict the poor. In that task, they partner officially with Catholic Charities and, unofficially, with The Homeless Alliance.

The Homeless Alliance was present at the September meeting, and Deputy Director Kim Woods said Seibold personally reached out to her organization.
“The meeting was essentially a question of ‘What do we want the neighborhood to be?’” Woods says. “We talked about parks, bus stops, lighting, sidewalks and some of the less safe areas. Mark (Seibold) talked about repairing the neighborhood in a thoughtful manner, being mindful of current residents, and even allowing them to play a part in the process.”

Seibold and the Homeless Alliance agree on one key point in development: Seibold wants to focus on smaller, family-focused housing and medium-sized developments, such as fourplexes and eightplexes, rather than the city-block sized developments that have dominated gentrified housing to this point.

“When demand is high, landlords can afford to be more picky,” Woods says. “Part of addressing homelessness is a variety of affordable housing options; we have to keep our current stock of affordable housing so as not to price people out. Families – people – do better with scatter-site housing, living in fourplexes, small houses, duplexes, those sorts of options. Mixed-income housing is best for the health of a neighborhood and to combat homelessness.”

In truth, Seibold said, the neighborhood is a long way from development. The planning has only begun, but he has already reached out to the city of Oklahoma City to start talking through the process. For the moment, the Ironworks area’s future remains unforged.