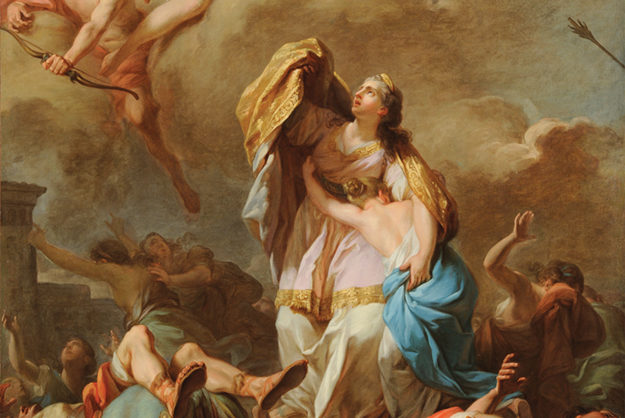 It’s Always Helpful to Have a Situation That Provides a Concrete Definition For a Subjective Term; if you have any doubts or confusion about what “masterpiece” truly means, it’s time to head to the Oklahoma City Museum of Art.

The OKCMOA is the opening venue for the national tour of a new exhibit with a name that isn’t shy about proclaiming its excellence: “Gods and Heroes: Masterpieces from the École des Beaux-Arts, Paris.” Opening June 21, it’s a showcase of highlights from the namesake school’s long and storied history, and while the title refers to the subject matter of much of the works contained therein, for French art aficionados it would be difficult to hope for a roster of talent more divine.

Jacques-Louis David, Jean-Auguste-Dominique Ingres, Jean-Honoré Fragonard, François Boucher, Charles Le Brun, Théodore Géricault and Nicolas Poussin are some of the greatest painters ever to hail from la belle France, and each honed his craft at the venerable École des Beaux-Arts. Gods and Heroes tells the story of their alma mater’s unparalleled creative legacy through more than 140 examples of their work and their fellow scholars’.

Organized by the American Federation of Arts and the École itself, the exhibition draws on more than two centuries of work to provide visitors an overview of an institution that produced some of its country’s most accomplished artists.

Half the original U.S. colonies hadn’t been founded yet when the school came into being. Harvard was only 12 years old; Yale wouldn’t exist for decades. A highly competitive school that provided rigorous training, the École des Beaux-Arts’ impact on the visual culture of France, Europe and the world is incalculably vast.

“The legacy of the École des Beaux-Arts cannot be understated,” says OKCMOA President and CEO E. Michael Whittington. “Until World War II, Paris was the center of the art world, and generations of American artists made their pilgrimage to study at the École. [A list that included Mary Cassatt, Thomas Eakins and James Gamble Rogers.] To have this great collection with its star-studded cast of artists now coming to the United States is a once-in-a-lifetime opportunity for the people of Oklahoma.”

With exceptional works crossing the breadth of more than two centuries, the exhibition will provide an immersive experience into the École and its program of demanding study, revealing how artists were as much “made” as born, as they systematically learned how to create prescribed images. Generations of artistic masters depicted the epic deeds of gods and heroes as portrayed in the words of the Bible, Homer and other classical sources. Key themes carried through these works include the way in which art was used in service to power, the significance of subjects drawn from ancient history and myth and the importance of convincingly rendering the human form in action.

The exhibit also provides extra context with paintings created by some titans from other cultures, giving metro aesthetes a chance to see pieces by Rembrandt van Rijn, Albrecht Durer and other masters as part of an incredible assemblage of the great works of the Western canon. And for fans of Neoclassicism, this is a perfect opportunity to – so to speak – look back in Ingres.

While the stunning works of art starring in Gods and Heroes have maintained their majesty for centuries, its tenure in Oklahoma City will be far from timeless. Catch it June 21-September 14 at the OKC Museum of Art, 415 Couch Drive, and call 236.3100 or visit okcmoa.com for more details.