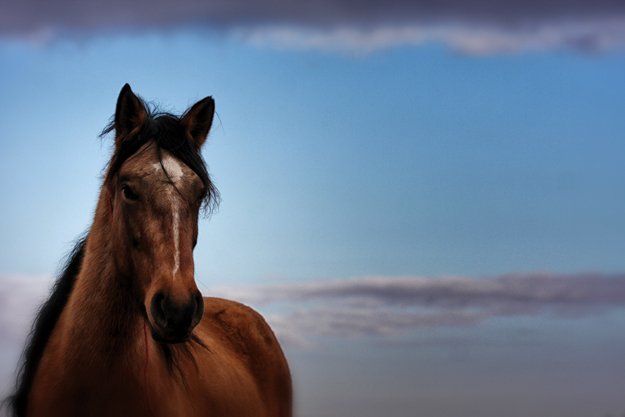 The same animals that don’t draw a second glance as they graze near the interstate become infinitely more interesting when their origins are revealed. These are not just horses and donkeys. They are wild burros and mustangs, vestiges of the old American West.

This Garvin County corral, an hour south of Oklahoma City on I-35, is one of 11 federal adoption centers run by the Bureau of Land Management, and the only one in Oklahoma. On the second Tuesday of every month, from 8 a.m. til noon, animals are offered for adoption fees of $125. Horses aged four and older come with an incentive: $500 and the horse’s ownership papers after one year of successful care.

The dozen or so people who show up the morning of the first adoption day of 2013 are handed a single sheet of paper listing each animal’s tag, age, state of birth and color. Pinto. Palomino. Grulla. Buckskin. Appaloosa. Red Roan. Sorrel. Dun.

Gary Hughes, who has helped manage the center for the past decade, and Meredith Kueck, a recent Kansas State graduate, greet the visitors for the monthly open house. They walk and talk with the browsers, leaving them with the adoption list.

The animals are culled from 31,453 wild horses and 5,841 wild burros from way out West. Their range of 31.6 million acres of desert, prairie and mountains stretches through federal land running from the Canadian border down to Mexico, through 10 Western states. The mustangs share the grazing lands with domestic livestock, mostly cattle, and other wild creatures such as sheep, goats and elk. To the approval of some and the dismay of others, the BLM thins the herd regularly, removing horses and burros from their native range to keep the numbers in balance. 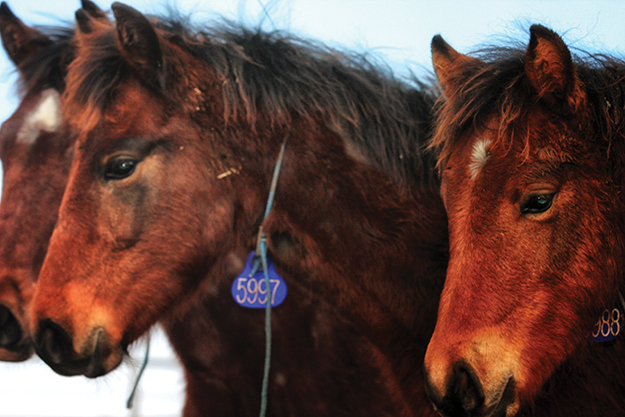 For the 41 corralled in Pauls Valley, their world has now shrunk to five white-fenced holding pens as the curious walk the perimeter.

Pen 2 holds yearlings – two fillies and seven colts, mostly brown or sorrel – conceived in the wild but born in Oklahoma to captured mares. All bear freeze marks on the left side of the neck, a 21st century brand that looks ancient on some and futuristic on others. The angles and alpha-symbols are created by a nitrogen-chilled iron where the hair grows back white. The result: a funky, punky hieroglyphic tattoo that imparts to each animal a wild tribal vibe.

In Pen 4 next door, five free-born burros huddle as far as possible away from the trickle of passing people. The oldest were taken in California, and now wear Tags 2252 and 2350. Estimated age: 9-10 years old. Expected life span: 30 years.

The adoption program, now in its 40th year, has found private homes for 230,000 horses and burros nationwide. The success rate has plummeted as the economy has slowed and the price of feed and hay has risen. The BLM recorded 5,701 adoptions in fiscal 2005, but only 2,598 last year. About 20 percent of those were handled through the Pauls Valley center on its satellite visits through Oklahoma, Texas, Kansas and New Mexico.

Pen 5 holds eight geldings, each two years old. The boldest sidle up to the fence, in search of a pat or a kind word. Four of the eight were born in Pauls Valley, to mares who were pregnant when they were rounded up out West and on the trip east. 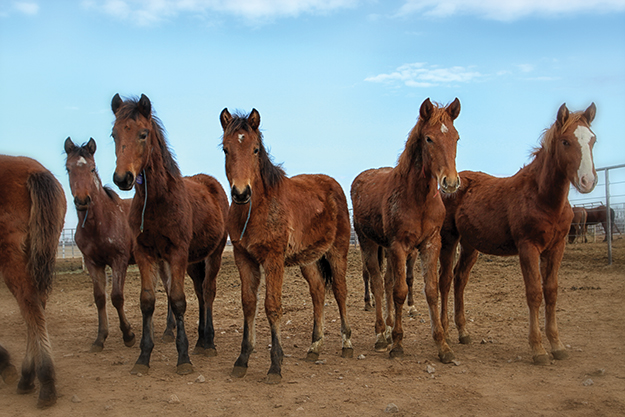 The older geldings in Pen 1 and the mares in Pen 3 are warier. They move as a herd, shifting and starting as if connected when a gust of wind or unexpected noise spooks even one among them. In close quarters, their recoil is as synchronized as a flock of birds, a school of fish – or a herd of wild mustangs.

At the end of the day, no offers had been made for any of the horses or burros. The center averages only one adoption per month, and places most of its 500 annual adoptions when it brings the horses to events in the region. The next off-site, in-state adoption will be held August 15-17 at the Claremore Expo Center.

“Times are tough,” Hughes said after the ranch couple and the artist with her daughter drove off empty-handed. “People come here for a wide range of reasons. They’re curious about the program, they want to see wild horses, they want to take pictures. But I knew there’d be no adoptions today. No one came with trailers to take ’em.”

At the end of the week, the group of 41 left Oklahoma for a weekend fair in Mercedes, Texas. Twenty-six of the mustangs were adopted, and left in trailers for their new homes off the range. 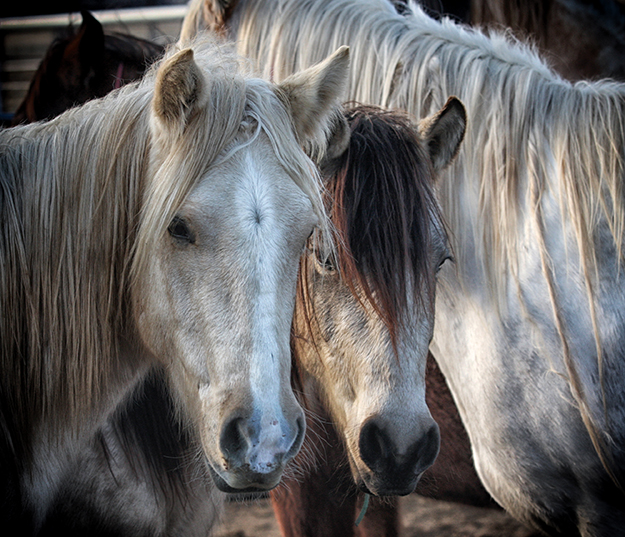 OKLAHOMA: Home Off the Range Wild Horses by the Numbers

The grasslands of eastern Oklahoma and the open rangelands of Nevada are home to more mustangs than any other place on earth.

Their survival was ensured by the Wild Free-Roaming Horses and Burros Act of 1971, which protects established herds of horses and burros. The legislation – passed unanimously by Congress, signed by Richard Nixon and coordinated by the Bureau of Land Management – declared mustangs “living symbols of the historic and pioneer spirit of the West.”

The act ended decades of neglect of the animals, which had been shot for sport and captured for slaughter to be used for glue, pet food and horse meat.

In the 21st century, more American wild horses now live in captivity than survive on the range. The BLM removes several thousand from federal lands each year, gelding the stallions before shipping them to one of 11 adoption centers, or to long-term pastures. Opponents argue that the land can sustain more grazing and that the animals would be better served with less intervention. The BLM maintains that, with few natural predators, the number of wild horses would double in four years if left on their own, damaging their health and the environment. 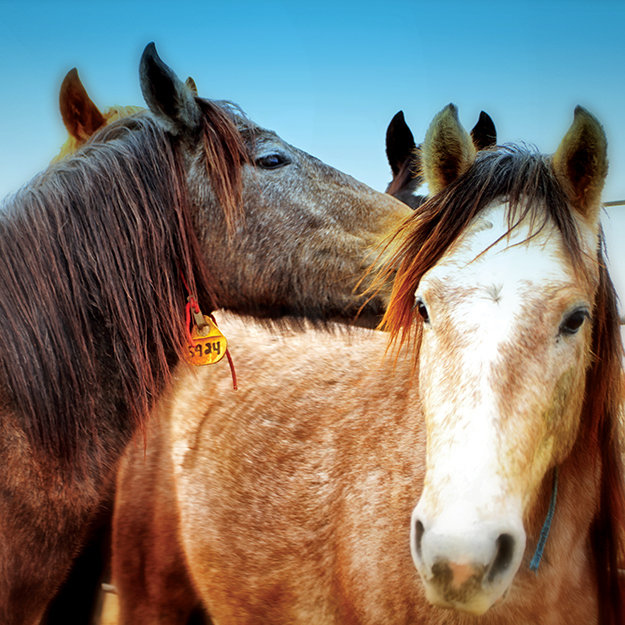 In addition, the Pauls Valley center held 650 horses and burros at the beginning of 2013. The short-term corrals at adoption centers include active monitoring of the animals, and veterinary care, costing the program $6 per head per day.

Editor’s Note: This is the seventh installment in a continuing series as author and photographer M.J. Alexander chronicles her travels across the state of Oklahoma.