Give Pests the Purple Light 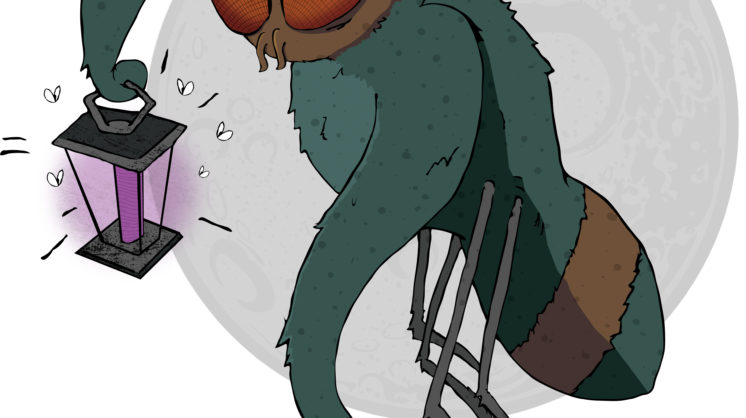 I don’t know what the bugs-to-people ratio is in other states, but after the past five or six mild winters, I really think Oklahoma has cornered the market on six-leggers and other flyers. It’s had me on edge since February, when our kitchen was invaded by both a mosquito as big as my palm and a fly the size of a robin. The Brundlefly had obviously done nothing but bulk up over the winter; a blue jay couldn’t choke him down if he wanted to. If he’s any indication of what this summer’s insect population is going to be, I’ll be bathing in DEET and stocking up on windshield wiper fluid like a full-on prepper.

I’ve also committed to a major upgrade to the backyard bug zapper, which is the subject of ongoing debate in the Roth household. Mr. Roth, who insists on carrying any intrusive pest back outside with a “good luck” wish and a pat, is horrified at the thought of any kind of bug meeting his maker via violent zap.

“It creates a reduction in food source for the birds,” he says in protest.

“The birds must be on a hunger strike,” I tell him as I slap my neck.

Our backyard is ground zero for all critters great and small, so the Battle of the Zapper is sure to continue long into the fall, as it does every year. When its purple glow goes out, I know he “tripped over the cord” or “used that outlet for the weed-eater” or “couldn’t sleep with that light shining through the bedroom window.”

I have certain prejudices toward bugs that I think most people share. I get warm and happy feelings when I see a ladybug or a monarch butterfly – to the point that I feel the need to say hello to them and talk very softly and sweetly, the way you might speak to a baby. Throw a grasshopper or silverfish into the mix, and my demeanor and tone become like a prison warden’s. Insulted that something so revolting would invade my space, I feel no remorse in squashing, swatting, spraying or otherwise exterminating it. Fireflies: you’re safe. June bugs and locusts: get away from my hair. Wasps and spiders of any variety: I think we all know how this will end.

Not everyone hates bugs. It’s estimated that two billion people in the world eat bugs. I am most definitely not one of them, but I once saw a program about a street vendor in Thailand who cooked grasshoppers and crickets (which taste like bacon, they say – let me know) in a wok and complained that he couldn’t keep up with demand.

My demand is for more of a healthy no-go zone around me – and that means all the time. Seeing a bug during my waking hours will send me into a seizure-like protest, but the possibility of anything crawling anywhere near my zip code at night is a new level of terror. This is a deep-seated anxiety that stems from my mom telling Little Lauren an appalling story involving my sleeping mom’s ear, one bug of some kind (does it matter?), two days and three doctors. To me, that adds up to “super-deluxe bug zapper.”

Flying, crawling, burrowing, hatching … I’m plugging that zapper back in, Mr. Roth, and no, I don’t care that the tree bug is a mother of 530. I’m sending them all into the purple light.

It’s summer in OKC – make the most of it! Look for my new book, 100 Things to Do in Oklahoma City Before You Die, at a bookstore near you or on my website, laurenhammack.com.