Glam 'n' Shine Lets Everyone Glow on the Runway - 405 Magazine 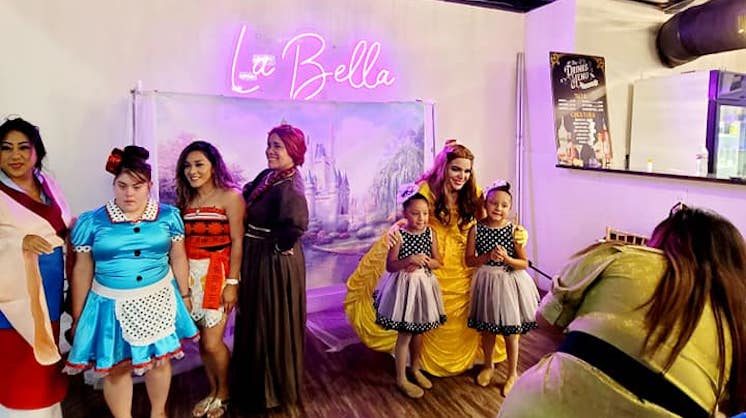 Cathy Cardenas of Angels Modeling and Dance Studio opens the floor for aspiring models and designers of all ages to have fun and showcase their talent at La Bella Event Center October 12.

It was Cathy Cardenas’ daughter, Miriam, who pulled her into the world of fashion and modeling.

“She loves dance — she has since she was three years old,” Cardenas said. “One day, she participated in one pageant, and we started dabbling in pageants and runways, and she loved it.” Cardenas recognized Miriam’s natural talent and confidence and took her to model in states such as New York, Florida and Texas.

During their modeling journey, Cardenas noticed there weren’t as many Hispanic studios in the 405. She opened Angels Modeling & Dance Studio in 2018 in south Oklahoma City to create an encouraging and joyful environment for Miriam, who has Down syndrome, and any eager kid interested in modeling and dance.

The studio has grown over the four years, even after losing its physical space at the start of the pandemic. Angels organizes several performances each year, and the group won first place in dance at the Fiestas de las Américas parade in October.

Cardenas’ mission is inclusion for everyone, especially for those with disabilities. Expanding on that goal, she wanted to provide modeling opportunities for kids not part of the studio who might not be able to afford traveling or submitting to shows. She enlisted the help of her friend Melina Rodriguez and many others to put together a showcase for local models and designers to dazzle the runway. Their daughters joined the project as participants and pitched ideas.

After six months of preparation, the first Glam ‘n’ Shine Fashion Show have its premiere at La Bella Event Center Oct. 12 at 7 p.m. The family-friendly show will feature 25 models equally consisting of children, teenagers and adults. “(The show’s tone) is pretty classy and really clean,” Rodriguez said. Oklahoma designers, such as Lyndah’s Exquisite Fashions, are collaborating with Glam ‘n’ Shine to bring their styles to the stage.

Rodriguez also said the show will present more than just fashion. Hispanic boutiques will sell art and handcrafted items, and there will also be a 360 video booth, make-up artists for the models, and a bilingual DJ.  Cardenas hired a team of photographers from Suchil Photography to capture the event and its passionate models.

“It’s going to be their first time (modeling) for some of them,” Rodriguez said. “We want it to be a pretty experience and nothing hard, nothing stressing. We want them to enjoy and to participate freely, without any kind of purpose more than having fun and doing the things that we like to do.” The show will open with a rehearsed dance number by the students from Angels Modeling & Dance Studio.

Both Cardenas and Rodriguez look forward to seeing Glam ‘n’ Shine’s participants walk the runaway, and they hope it excites the participants enough to hold future shows. “We’re thankful with them because they are giving us the opportunity to serve them, and they are going to show us if we did right or not,” Rodriguez said. “They are really good at modeling. It’s magic. It’s different.”