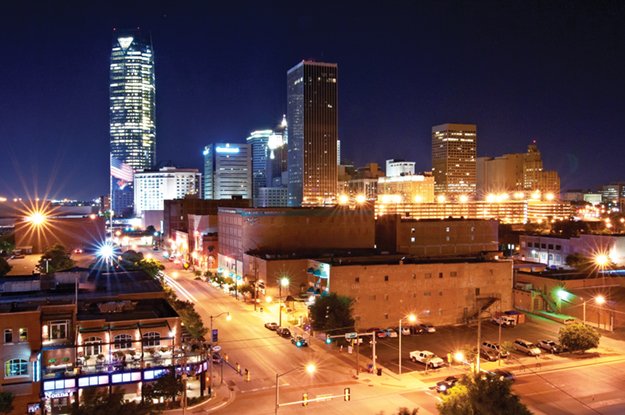 We don’t want to brag, but … Let’s admit it – living in the heart of Oklahoma is kind of a big deal. We boast one of the best teams in the NBA. We were invited to the world friendliness championship last year, but the contest was whistled over when the competition unanimously voted us the nicest people ever. A crowd surrounding The Most Interesting Man in the World tossed down their red Solo cups and strayed off when he confessed he’d never been here. We must be doing something right.

First, OKC’s reveling in a boomtown renaissance. The city’s bursting with the civic-minded energy and enterprise that animated our founders a century ago – when the nation’s newest state was only 6 years old and “progress” was boundless. Entrepreneurs, the business sector and community ventures are building, literally, on their prosperous past. Rescued districts and locales – Automobile Alley, Ninth Street, Midtown, Uptown, Western Avenue – have rumbled back to life like restored Model Ts.

Choices are juicier than ever for gastronomic journeys. The wafting aroma of smoked and fried honey chicken wings at one of OKC’s legendary pre-fad food trailers – Bobo’s on the northeast side – compels post-club partiers to queue up at 3 a.m. The local-food movement drives a carafe of never-before-seen restaurant concepts. And still the fryers run deep for local traditions of fried okra and chicken-fried steak.

Riders of the Storms

As 405ers, we’re always first in line for the roller coaster thrill ride of our annual riot of spring: tornado and storm season. Thanks to our Big Sky and long, low horizons, you can marvel at an angry black wall cloud ominously descending like an ink drop in a glass of blue water. From 20 or 30 miles away, your eyes will widen taking in a towering white-jellyfish thunderhead crawling slowly across the plains like a majestic white castle borne by furious magic carpets. It’s a show so spectacular that tornado tourists pay for it; we get it for free.

And, oh, the sunsets. When one’s blazing, the only thing lighting up more in central Oklahoma is Instagram. The last stand of each of our days seems best when contrasted against a sky full of billowing altocumulus, or high, cirrus sheet-clouds spilled across the horizon. Oklahoma’s pure air amplifies the brilliance as fading light slowly sprinkles dyes of scarlet, orange, fleece blue, cotton-candy pink, yellow or silver-gray until a blood-orange sun winks “see y’all later.”

Our sports are nothing short of Thunderous. Our NBA franchise has muscled its way into every post-season playoff since 2009. Diehard fans and a global audience were treated to a Cinderella tale with the team’s upstart shot at the championship in 2012. No other state has two college football teams less than 80 miles apart that regularly rank among the nation’s Top 20 in pre-season polls. (And they’re both in the 405!)

Let’s not forget the other sports competing to show us a grand time. When the RedHawks are in town, bark at the kids to slip on their baseball gloves for a trip to Chickasaw Bricktown Ballpark. Or watch the plexiglass rattle and wobble from your rink-side seat as a Barons sniper slams an opponent for your personal hockey-viewing pleasure. Smell the freshly trimmed grass when the women of OU softball, the current defending

It’s easy to smile, too, basking in the ample flattery from national media. Like tornado sirens on Saturdays, they regularly trumpet compliments like “one of the 10 best places for good jobs,”
“No. 2 for small businesses,” “among the fastest-growing cities,” etc.

“I love the spirit of the people. They are friendly, hard-working, hard-loving people and are always willing to lend a hand. With all of the tragedy our community has faced over the years, I have seen us rise to the challenges and time and time again come out on top. We join together and become family and do what needs to be done to make sure our family members are taken care of and
get back on their feet.”
– Krystal Keith, country singer-songwriter and daughter of Toby Keith

… you’ve explained what lamb fries are to friends from out of town. Or you’ve been very bad by keeping your mouth shut and insisting on picking up the check at Cattlemen’s.

… you know that scheduling any event, including weddings, on a football Saturday guarantees social suicide.

… during the Bedlam game, someone at your home watch party somehow suffers a significant leg wound in your backyard, hobbles in, and insists, “The bleeding’s not that bad! Don’t call 911 – unless they have the game on.”

… you think driving 50.7 miles from Piedmont’s Surrey Hills to the Lloyd Noble Center is a milk run.

… even though you live in a metro bathed in streetlights by night, you or someone you know has a story about a harrowing possum, skunk or raccoon encounter.

… someone self-righteously points out that our painted buffalo sculptures all over the metro are technically “bison.” Then you vow to yourself that you will never call them bison.

… you gesture wildly in a heartfelt conversation about why your favorite meteorologist will – seriously! – save your friend’s very life.

“My family is here, my memories are here, and I am making my life with my husband here. I can’t see myself living anywhere else. Each day there is something new to see or talk about. From the historical buildings with beautiful architecture to the fun nightlife downtown, there is never a dull moment – not to mention the awesome sporting events going on in our city, like Thunder games!”
– Jada, Thunder Girl

Shopping choices abound. The convenience of the Outlet Shoppes on I-40 mercifully disposed of the traditional credit-card fog and slog south to Gainesville. Edmond’s Festival Market Place has turned downtown shopping into an event. The civic dream of downtown Norman as a destination spot is fully realized.

We live in a place where finding a favorite annual festival is far easier than choosing what to eat when you get there. Edmond’s LibertyFest is an American classic – a top 10 “place to be” on the Fourth of July, CNN says. Norman’s Medieval Fair lures more people to town than a football game day. OKC’s Festival of the Arts ushers in spring and Red Earth dances Oklahoma’s tribes into the hearts of thousands.

“I love growing as a band in a city that is constantly growing around us as well. It’s like living in a big city with a small-town feel. Everyone is supportive of the arts and it makes it easier to pursue
what we want to do.”
– Cameron Neal, lead singer of Horse Thief

The 405 is a place where more than a few prefer “exercising” with some rounds at the indoor shooting range over bowling. Where 24,000 runners and walkers from around the nation and world step up for the Run to Remember, the OKC Memorial Marathon. Where you can be super-conservative or defiantly liberal, but if you’re both OSU fans, you’ll swap rounds of local craft beer while setting each other straight.

In the end, though, the ultimate reason to be happy in the 405 is us and what we do. Once a year, some of us hang a stadium chair in the crook of an elbow and scan for a good seat at Edlam, the gridiron rivalry between Edmond Santa Fe and Edmond North. On a day of reverence, a home cook may cheerfully wave away children pining for a tiny taste of peach cobbler before worship is over. Our magnificent weather inspires an awe exceeded only by our admiration for the resilient survivors among us when a twisting behemoth scrapes away a neighborhood.

Friends in All Places

Our kind ranges from cable TV stars hooking on to the nationwide fascination with redneck reality (Newalla’s Don “Katt Daddy” Brewer of “Mudcats”) to one of the 100 richest people on the planet (Harold Hamm of Continental Resources). Wherever we stand along that spectrum, any small differences we have fade away once a year with the last of the summer heat. As fall’s staging crew arrives to swap out the colors of the leaves, we all gather in spirit at the State Fair, jab a white plastic fork into an Indian taco, look around and say, “Ain’t it great to live in the 405!”