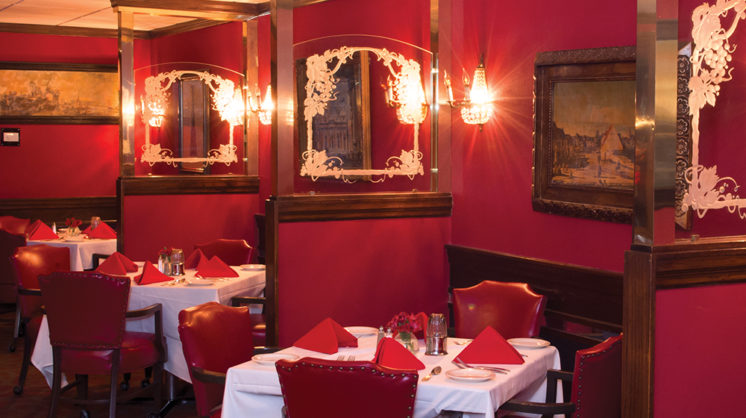 Dining out in Oklahoma City is much different today than it was a generation or two ago … but not completely different. Although beloved restaurants such as Der Dutchman, Glen’s Hik’ry Inn and The Cellar are long gone, at least one old favorite is still in business, serving up familiar foods in an elegant atmosphere.

It was Sept.10, 1973, when Junior Simon opened his new restaurant on the ground floor of the Oil Center on Northwest Expressway. Simply named “Junior’s,” the steakhouse soon became an Oklahoma City landmark.

“There’s an old saying that more oil deals were made here than in some of the board rooms downtown,” says Jim Shumsky, who purchased the restaurant from Simon’s widow in 2004. “I was a longtime patron, and when Genell (Simon) sold me the restaurant, I made a promise to her that I would keep not only the décor the same, but the quality of food.”

In fact, Shumsky said he has upgraded the menu and they cut all their own steaks, which are certified Black Angus beef.

“You can cut the filet with a fork,” he says proudly. “We also have chicken that we fry in cast iron skillets with our own special recipe, and lobster tail that is imported from the cold waters of Australia. I added king crab legs from Alaska, and also added a ribeye to the menu. There are a lot of restaurants in Oklahoma City that serve steak, but we pride ourselves on our consistent quality.”

Entering Junior’s is like stepping into another era, so dramatic is the effect of its lush, red walls, crystal chandeliers and sunken piano bar. The restaurant has only had two chefs during the past 44 years. And one server has been there since the beginning.

“Joanne has been with Junior’s since day one,” Shumsky says. “She just celebrated her 69th birthday and does a heck of a good job. She has clients that have been coming here from the beginning.”

Dinner begins with a Caesar or Syrian salad, made tableside. The entrée is served with Junior’s famous “Trash Potato,” which is another name for a loaded baked potato. And dessert is a generous slice of homemade cream pie, or the specialty of the house: a brandy ice.

“We still make our brandy ice the same way Junior made it 44 years ago,” Shumsky says. “We take three gallons of vanilla ice cream, a generous portion of cacao liquor and half a bottle of brandy, then before we serve it, we sprinkle a little nutmeg on top. We mix that up and freeze it right after lunch. That’s what makes it unique. You can get a brandy ice elsewhere, but it’s normally from a machine. On a busy Friday or Saturday night, we might go through 50 or 60 canisters.”

“This place is legendary,” Shumsky says. “Many restaurants have opened and many have closed. But Junior’s has survived the ups and downs of our economy. I think we are the most consistent restaurant in terms of quality and service, and every day I am grateful to keep a true piece of Oklahoma City history alive.”