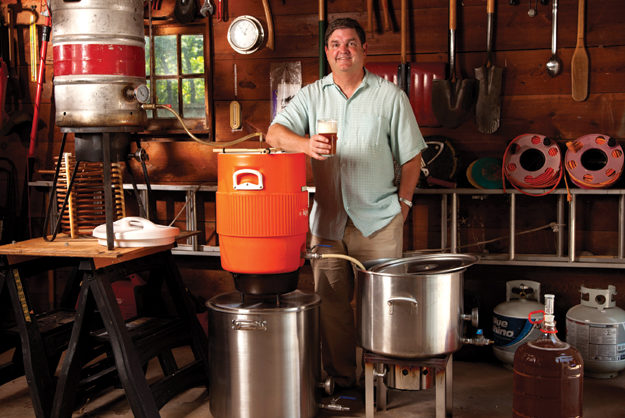 Brad Ferguson is a man of many talents and interests. A composer and pianist, he also holds a law degree from OCU, and for nearly three decades he has been the first voice thousands of classical music lovers hear every day as morning announcer for KCSC Radio. He has also served as the station’s general manager since 1992. Ferguson has an affinity for astronomy, trains, the music of Ralph Vaughan Williams… and beer.

He professes a longtime interest in brewing, but it was kindled into something more than a passing fancy when he was invited to dinner at the home of Nuri Creager and Steve Law. Creager was a part-time employee at KCSC at the time. Her husband, Law, a professor of humanities at UCO, had been a home brewer for years and brought out some of his beers to serve with dinner.

“They tasted wonderful,” Ferguson remembers. “I started talking with Steve about it and getting interested in it. Then, for my 40th birthday, my wife Kate gave me a home brewing kit. I made my first batch, and it was good enough that I thought it would make a nice little hobby. I continued to do it, and at some point I became obsessed by it.”

It was a progression over time. At first Ferguson bought pre-packaged malt in a can, later graduating to buying the grain and crushing it himself. Over the last 20 years, he has created a large variety of ales and lagers. His operation has grown steadily more sophisticated as years have passed. He has set up tanks in the garage of his Crown Heights home, with a gravity-fed system, a boil kettle… all the trappings of the serious home brewer. He produces 10 gallons in each batch.

Of course, as every brewer knows, naming the beer is an important step of the process. A recent batch, created for a friend, was “Mad Mike’s IPA Squared.” One early creation was a Bock that, in a fine bit of musical wordplay, he called “Johann Sebastian.”

It is considerable work to do beer the right way. Likewise, home brewing can represent a substantial monetary investment for the serious brewer. But for Ferguson, there is great satisfaction in making beer, and getting it just right. “It’s the joy of creating something,” he says, “and having it to offer, to share it with family and friends. There are only four basic ingredients in beer – hops, malt, water and yeast – but infinite permutations of what you can do.”