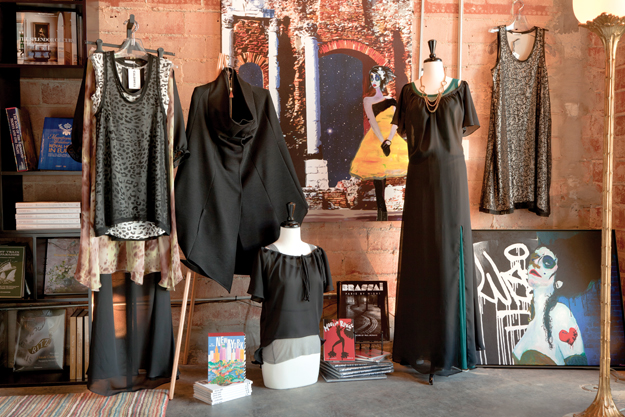 When the average person thinks of fashion, they’re not likely to think of Oklahoma City as a hub. But, as I have learned, one does not have to live on the coast to have serious talent or to earn a good living from this highly competitive industry. The fashion design talent pool is deep and strong here in OKC. I recently had the pleasure of sitting down with two young, talented locals who are producing some amazing fashion goods – all available right here in town.

Annah Chakola, the 33-year-old designer behind Boho Gypsy, specializes in jewelry and handbags. Raised in Kerala, India, Annah uses found objects, beads, stones, coins and fabrics from India and her travels around the world to create her one-of-a-kind pieces.

She credits her father, an artist in his own right, plus the comings and goings of housefuls of talented and influential artist friends in her native India, for her design genius. But it didn’t land her immediately in design: she worked for a non-profit in Texas until love brought her to Oklahoma, where she worked in fundraising for an OKC arts agency before deciding to devote her time and attention to creating wearable wonders.

Her pieces can be purchased at GrettaSloane and A Date With Iris, where she works part-time, as well as through her website, www.bohogypsy.com.

What I like about Annah’s work is the creative hand with which they are crafted and that each piece tells a story. Plus, a portion of the sales go back to India to support educational programs.

David Caldwell began his journey to a life of fashion design closer to home – the 32-year-old grew up on a five-acre farm in Choctaw, Oklahoma with his mother and brother and spent time creating crafts, household projects and gardening. He began to show an interest in design at an early age and was encouraged and nurtured by his mother.

He attended the University of Oklahoma studying entrepreneurial business, then international business in northern Italy. That’s where David became intrigued with fashion design, and he then enrolled at Oklahoma State University, where he received a Bachelor of Science in Design, Housing and Merchandising, with a focus in Apparel Design and Production. After graduation, he moved to New York to pursue his dream of becoming a fashion designer.

While in The Big Apple he was selected to take part in the reality program “The Fashion Show, Ultimate Collection,” starring Isaac Mizrahi and Iman – he lasted six episodes before being eliminated. David stayed in New York after the show, and to supplement his design business he worked as a doorman for a hotel… where he had the good fortune to meet and work with Paula Abdul. He served as her designer and tailor on her short-lived reality show “Live to Dance.”

David returned to OKC in 2011 to better focus his energy on design. His goal is to open his own boutique here, but in the meantime you can find his striking designs at The Consortium in Casady Square.