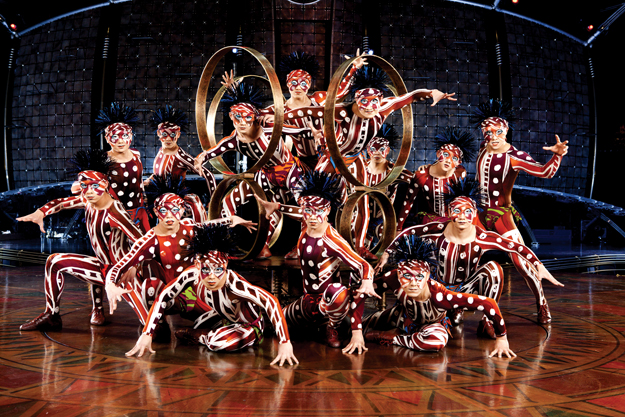 It requires steady hands and strong vision to combine separate ideas – East and West, tradition and innovation, awesomeness and more awesomeness – into something new that maintains elements of its influences while finding a feeling of harmony… fortunately, those are skills Cirque du Soleil has in abundance.

Even the name of the show coming to OKC – Dralion – is derived from a sense of balance between totemic creatures: the lion, symbolizing the West, and the venerable dragon of the East. Dralion incorporates the 3,000-year-old tradition of Chinese acrobatic arts into Cirque du Soleil’s already-spectacular physical repertoire, and draws inspiration from Eastern philosophy and its never-ending quest for harmony between humans and nature.

Deities representing the four classical elements of earth, air, fire and water are the stars of the show, accompanied by dozens of other performers acting as mythical beasts, clowns, a chosen child and a choir promoting and providing harmony among each and all. They dance to specially composed music with worldwide influences ranging from Andalusia to the Americas; they dazzle in vibrantly colored costumes inspired by clothing from India, China and Africa; they draw audiences’ breaths away with expertly performed physical feats from trampoline stunts and aerial acrobatics to twirling 25-foot-long bamboo poles and juggling while breakdancing.

In the world of Dralion, cultures blend, Man and Nature are one, balance is achieved… and disparate parts add up to a whole that is simply great.