In the Spotlight - 405 Magazine 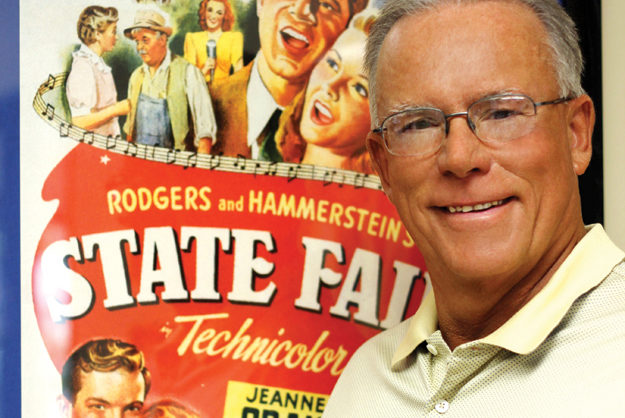 September in Oklahoma ranks high on the olfactory chart. Depending on the direction of the wind, a late-summer breeze can come dressed in either the rapturous scents of cinnamon rolls, funnel cakes and Indian tacos… or the livestock barn.

One whiff of any of those and you’ll know it’s State Fair time – an 11-day bonanza of fragrances (September 13-23) that takes about 11 months to plan.
Eleven months and 24 years, that is. That’s how long Scott Munz, vice-president of marketing and PR for the State Fair of Oklahoma, has been perfecting this colossal, annual rite of fall and its colorful succession of performances, events, rides and countless exhibits.

We pointed our spotlight his direction this month and found Munz licking his chops beside the cinnamon roll trailer.

How long have you had this gig? This is my 24th Oklahoma State Fair.

How has the fair changed in 24 years? The rides are way more elaborate than they used to be. They’re multi-million dollar machines that are tricked out with LEDs and spin you even more directions.

So, there are more directions for “returning” your funnel cake? Yes. Watch out – the “Spin Out” will get ya.

Do you still ride rides like that? The non-qualifiers are: 1.) Bad back; 2.) Pregnancy; and 3.) High blood pressure…

And 4.) Just ate funnel cake. Exactly. I qualify for #1 and #3, so I don’t ride anymore, but my kids love all those rides and my wife, Lisa, is a good sport to go along.

…while you wait in the cinnamon roll line? I get here pretty early during the fair, so I can sometimes beat the lines for any of the Big 3. But on a Saturday at 1pm, forget it.

What are the Big 3? Cinnamon rolls, turkey legs and Indian tacos.

Mmmmmmm! What other fair rituals do you observe every year? Well, we don’t hold hands at the bottom of the Space Needle and sing “Kumbaya,” if that’s what you mean.

This could be the year you start! The best part is seeing the same people – it’s only one time a year, but after so many years, we’ve all become friends. For years a guy named Andy Anderson – we called him The Iron Man – used to climb up to the top of the Space Needle (wearing his blue leisure suit) to change the light bulbs. We finally retired him. He was 80.

What do you consider your best decision as it relates to this job? The best decision I’ve made is just to embrace this position and face whatever comes with it, head-on. You never know what you’re going to get from one day to the next – you may prefer not to work in the pouring rain, but sometimes, you’ve just got to put your boots on and get out there.

I thought you were going to say that sometimes, you’ve just got to put on your blue leisure suit and get out there. It can’t be easy to pull off an event of this scope. It helps that I have a tremendous staff of the same mindset. They make it happen.

Where are you from originally? New York. Born in Brooklyn. Grew up in Hicksville, Billy Joel’s hometown.

Did you know him? Only casually. We had mixers at my high school and he’d always come and play with his band, The Hassles.

How did Billy Joel let you escape to Oklahoma? I worked in concert promotions in the ’60s. I had an undergraduate degree in psychology and a minor in sociology, so what else was I going to do? My buddy and I drove here in our VW Microbus for an event in Tulsa.

Have you kept up your musical interests? Yes. In fact, I consider myself to be something of a rock ‘n’ roll historian.

Tell me what’s on your iPod. Well, I’ve got about 2,000 songs – all handpicked, of course – and they run the gamut. Let’s just see here… (taking out his iPod)… “You’re the Hangnail of My Life and I Can’t Bite You Off” is on here. “Baby Got Back” is a great one. Oh, I like this one: “It’s Hard to Kiss the Lips at Night That Chew Your Ass Out All Day Long.”

Any Maureen McGovern? No. But I’ve got some Smokin’ Armadillos.

I thought I smelled something cooking.