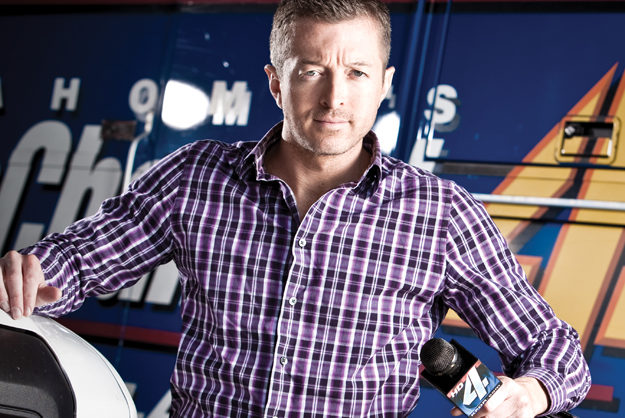 Through his work as KFOR’s “In Your Corner” reporter, Scott Hines is arguably Oklahoma’s No. 1 consumer advocate. In fact, when many Oklahomans have been wronged, they call Hines before calling the police, in hopes that Hines will champion their causes and expose the shady and the corrupt in the process.

Though Hines is most often the man asking all the questions, this month he finds himself on the other side of the interview as we turn our spotlight on this intrepid consumer advocate, pursuer of justice, sports and yoga enthusiast and, quite possibly, the voice of one of the Shake ‘n’ Bake daughters from the 1970s.

Are you a native Oklahoman? No, although I’ve definitely put down roots here. I was born in Louisiana, but I’ve lived all over. We lived in Monroe, Louisiana…

Don’t you mean “MON-roe?…exactly! I used to have the same Southern accent as the Shake ‘n’ Bake girls – remember them? “It’s Shaaake ‘n’ Baaake an’ we hayelped!” And I sounded just like them because I had this really high-pitched voice when I was young.

Where else have you lived – and was this because you were running from the law? My dad was a football coach, so we moved as his career did. He coached at Ole Miss, so we lived in Oxford, Mississippi…

Oh! I’m dying to see an Ole Miss home game some time! The fans are so into their role! They all know the songs when the band plays. You should definitely spend some time in The Grove! There’s nothing like it!

The cheer! I said, “Ole Miss, I am!” for years until my buddies finally told me, “That’s not how it goes.” But anyway, we lived in Fort Worth and then in Indiana when I was in high school. I went to Ball State my first year of college and then to Oklahoma State when we moved here, and I majored in broadcast journalism.

Tell me about your job! Does your phone ring off the hook? Yes! We get about 200 emails or phone calls every week. You wouldn’t believe how many of those people call us before they even call the police!

Probably a lot of cray-crays, too. Yeah, plenty of crazy people. Once, we were doing a story on a senior citizen who had been scammed by the company that was supposed to be monitoring her alarm system. In the middle of the interview, my cameraman and I both realized the lady didn’t even have an alarm system. She was just crazy and wanted us to come over, I guess.

It’s always the old people who run into the sketchy roofers, tree trimmers… There are a lot of them out there. We’ve followed one guy for years – he turns up as a roofer, a financial planner, you name it. He’s run so many scams.

Besides your job, you volunteer for several nonprofit organizations. Do you feel called to serve others in some way? I come from a tight-knit family and I feel blessed to have had a lot of awesome people around me. I think wanting to help others is just an extension of that.

What’s less important than it used to be? Material things. People’s judgment. I don’t worry about what people think of me. I’m over myself!

How do you make that happen? I go full throttle all the time, so I have to exercise and do hot steam yoga to try to stay grounded.

That yoga isn’t how you broke your arm that one time, is it? No – I was playing competitive softball. I was throwing the ball back in and my humerus just snapped.

What’s on the iPod? I like all kinds of music. There are a few surprises, though. ’N Sync’s “Bye, Bye, Bye.” “Don’t Be Tardy for the Party” by Kim Zolciac from “The Real Housewives of Atlanta.” I love some “Housewives!”

What are you most grateful for this Thanksgiving? Health and family, of course. My nieces. OSU football and my Neti pot.

The Neti pot changed my life!