Inside the New Hideaway 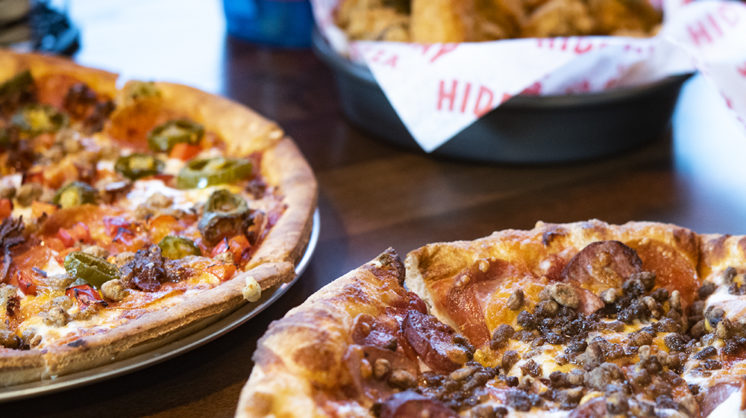 Sometimes bigger is better. The new, two-story Hideaway Pizza is open at NW 50th and Western, boasting a capacity of more than 250 diners, which makes it among the largest of the company’s 19 locations. Additionally, there’s a patio along Western, and the bar – rescued from an old Applebee’s – is the largest among the chain.

“We featured the bar prominently because we realized that we could have a large, vibrant bar scene and still be family friendly,” says Janie Harris, the director of guest relations for Hideaway Pizza. The taps feature a good selection of local brews, including Anthem, COOP and Prairie Artisan Ales. Full menu service is available at the bar.

The opening of this new restaurant means Oklahoma City’s original location in Nichols Hills – perhaps best remembered because of the fire in 2012 that forced a rebuild of the location – is now shuttered. Harris said the company evaluated its options as the lease at 6616 N Western neared expiration.

“We saw an opportunity to create an anchor store on a busy corner on North Western,” Harris says. “We have undeveloped land on the south side of the store that we plan to develop, maybe into business space or restaurant space.”

Harris added that the company is aware of this location’s high visibility, and as such, they want to participate in one of Western Avenue’s best traditions.

“Before we moved in, we spent time looking at all the murals along Western Avenue,” Harris says. “We love the murals in the area, and we want to be part of the beautiful public art in the area.”

To facilitate that, Hideaway has commissioned Owasso artist Kristin Davis to paint a mural on two sides – west and south – of the building. Davis has worked on one Hideaway in Tulsa, and her portfolio also includes original displays for the Museum of the Bible in Washington, D.C.

“The mural will have a kite theme in keeping with the interior of the restaurant,” Harris says. “As soon as she finishes the Tulsa store – probably this week – we’ll get her started on this location.”

It should be one more reason to swing by and take a look. And maybe get some fried mushrooms and a Capone while you’re there.