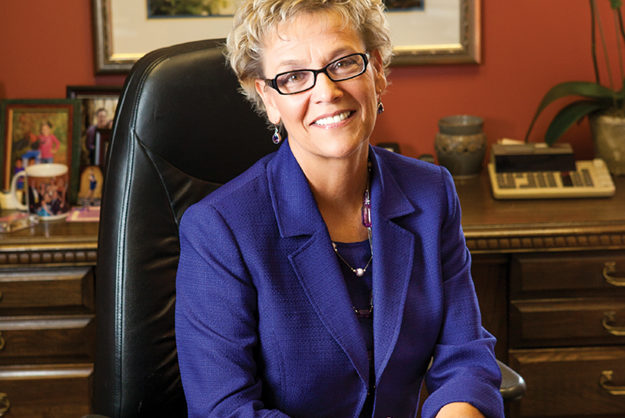 Well Before She Became a Vocal Advocate Against Domestic Violence as the CEO of the YWCA of Greater Oklahoma City, Jan Peery thought about being a teacher. If she had taken that path, she would probably have been putting the final touches on her classroom this month, in anticipation of welcoming a new group of students. A few of us might even have been her students, inspired by her unwavering desire to make a difference in the lives of others.

Instead, many of us have been introduced to Jan Peery through her devotion to her late son, Oklahoma City police officer Chad Peery, who became paralyzed following an attack as he attempted to break up a fight. A tragic automobile accident in April led to Chad’s untimely death and left his children seriously injured.

Although healing is often a slow process, the entire Peery family continues to look toward the future. By leading the YWCA through an ambitious, $15 million capital campaign, Jan Peery hopes to make a difference for thousands of women and children whose own healing might very well begin with lessons the would-be teacher learned from her own son: the immeasurable strength of the spirit, the legacy of a life well-lived and the importance of going back to the shore.

First, how are your grandchildren doing in their recovery since the accident? They’re doing better every day.

How long have you been married to Greg? 41 years.

Congratulations! How does one manage that? You take the peaks with the valleys. Too many people walk away when they’re in the valley.

What’s the best part of your job as the CEO of the YWCA? Getting to bring the issue of domestic violence to the community so that we can get people engaged in a dialogue.

Is this the kind of work you thought you’d be doing? No, my plan was to be a teacher.

But the plan changed … Yes. Along the way, I decided that I wanted to help out at the YWCA, two hours a day for one month.

Fast-forward to today, and you’ve helped raise almost $15 million for the YWCA’s capital campaign. We’re $250,000 from our goal of raising $14 million by October 9. If we reach that, a donor has pledged to donate the last $1 million to get us over the mark!

What do you wish you’d started doing long before now? Playing the guitar. I have a guitar that I’ve had since high school and I still want to learn to play it. I’m not giving up on that. Also, working in this field – and getting men involved in this issue that affects us all.

What are your unsung talents? Connecting people. And even though I’m not great at handling a gun, I’m a pretty good shot!

What do you bring to a crowded room? A smile.

What day is your birthday? August 25.

Happy birthday! What would the perfect gift be? Spending time with my family.

What is a risk worth taking? Speaking out to help someone or changing what needs to be changed. You have to take a risk to take a stand about anything.

What do you value most in your friends? Honesty and being there in good and bad times.

What do you believe that most people don’t? That each one of us has the opportunity to make a difference and that what we put out into the universe comes back to us.

What are you most grateful for? My family. The opportunities I’ve been given in life – even through everything with Chad. Seeing his courage and inspiration, we could see how God continued to bring out the good through the bad.

What will Chad’s legacy be? He showed us all the meaning of courage. He could have given up and no one would have blamed him. Instead, he took what life gave him and used it to help others in similar circumstances. He wanted to show his kids the importance of facing life head-on every day. His dream was to walk his daughter down the aisle one day.

Does his spirit help you make it through hard days? Yes. After Chad died, I had a dream that I was alone in the ocean, floating helplessly in the dark and searching desperately for the shore, which I couldn’t see in any direction. In the far distance, I saw a big, dark ocean liner and called out to it. As it got closer, it appeared to be white and bright. A blond-headed guy leaned over and asked me if I needed help and I said I couldn’t find the shore. Then he pointed, and the shore appeared close by and there was a sunny boardwalk with a Ferris wheel and lights and happy people who were walking around. The man said, “Just go that way. It’s right there. Go back to the shore.” I still remember the dream so vividly and I know the beautiful blond-headed man was Chad, telling me that I need to go back to the shore and live my life. It’s what he would want all of us to do.

Author’s note: During our conversation, Jan expressed her heartfelt gratitude to the community for its support of Chad and the Peery family. In particular, she described the loyalty of the men and women of the Oklahoma City Police Department, whose constant presence by Chad’s side helped their fellow officer brave the most difficult moments of his journey.