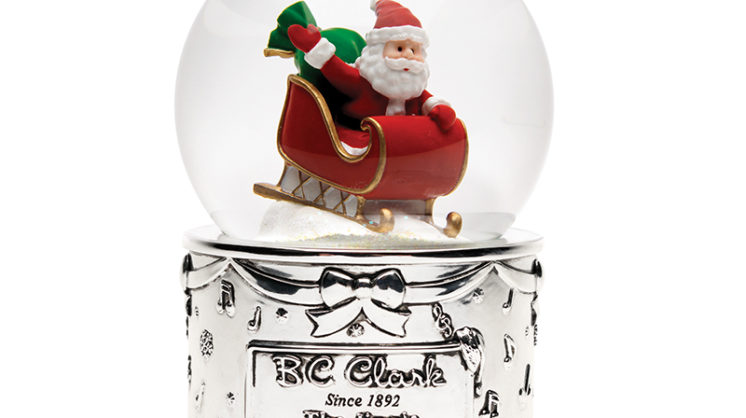 It’s not “Silver Bells,” “White Christmas” or even Brenda Lee’s “Rockin’ Around the Christmas Tree” that signifies the beginning of the Oklahoma City holiday season. For many, it’s the first airing of the BC Clark Anniversary Sale jingle.

This Christmas marks the 60th anniversary of the jingle, which first aired during the holidays in 1956. Through the decades, the sprightly little ditty has become a tradition. Even actress and OKC native Megan Mullally remembers it – and actually gave a spirited a capella rendition on national TV during a 2009 appearance on Jay Leno’s “Tonight Show.”

“There’s this one thing that always reminds me of Christmas,” Mullally told Leno. “It’s this jingle for this fancy jewelry store. It’s kind of like the Tiffany’s of Oklahoma City, called BC Clark’s.” And with that, Mullally serenaded the nation with the familiar strains of “Jewelry is the gift to give …”

“Dad wrote the words to the jingle,” Ackerman says, “and Al Feigle put them to music. There’s also a missing verse that many people haven’t heard in years.” The jingle was edited in the 1970s to its current format – but when the song first aired, time limits weren’t so strict, he said. “Originally in the ’50s, radio stations weren’t watching those precious seconds so much. The jingle was originally 35 seconds long; the closing lines then were: ‘At Oklahoma’s oldest jeweler, since 1892, the Christmas wish of BC Clark’s is to keep on pleasing you. So give the gift you know can’t fail from BC Clark’s Anniversary Sale.’”

“Traditionally, we begin the Anniversary Sale for our loyal customers on November 1,” says founder B.C. Clark’s great-grandson, Coleman Clark. “But we never advertise the sale with the jingle until Thanksgiving Day.”

Clark called it amazing that the song has become such a tradition, and said that Mullally’s rendition on the “Tonight Show” is just one example of how it has become a part of Christmas for so many Oklahomans.

“It was amazing and surreal that a local jingle would make it on the big stage like that,” he says, “but Megan’s story is like thousands of other Oklahomans who say they are reminded of home and Christmas when they hear the jingle. Other famous Oklahomans have mentioned it or sang it over the years, including Blake Shelton at his Oklahoma City concert back in September.”

To commemorate its 60th anniversary, the company has commissioned a limited edition “Jingle Snow Globe” that plays a portion of the tune, available at bcclarkjingle.com while supplies last.

“It even has its own Facebook page with over 12,000 followers,” Clark says. “And typing ‘BC Clark Jingle’ into YouTube will yield nearly 4,000 video clips.”

So here it is in its entirety, and let the holidays begin!

“Jewelry is the gift to give, ‘cause it’s the gift that’ll live and live.

So give the gift you know can’t fail, from BC Clark’s anniversary sale.

Most sales are after Christmas, but Clark’s is just before.

Most ev’rything is marked way down, savings you can’t ignore!

At Oklahoma’s oldest jeweler, since 1892.

The Christmas wish of BC Clark’s is to keep on pleasing you.

So give the gift you know can’t fail from BC Clark’s Anniversary Sale!”