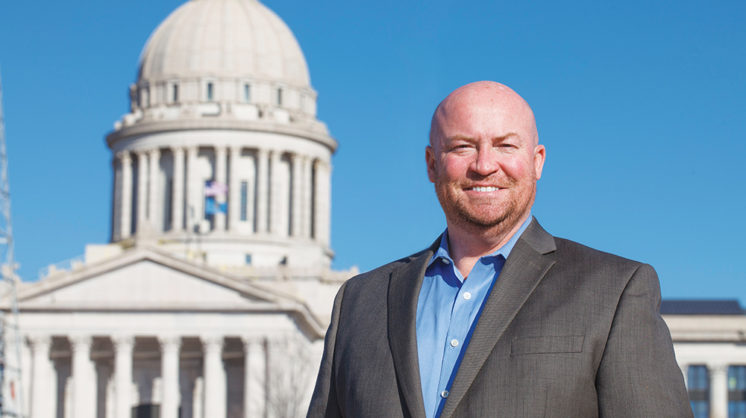 It’s been a few years since Joe Dorman left the harsh spotlight of politics, but he hasn’t gone far. He spent more than a decade in the state legislature, and ran for Governor in 2014. Since then, he has dedicated much of his time to making sure Oklahoma’s children and families have what they need to survive as well as thrive. We recently spoke with Dorman about his work, what he sees on the horizon for Oklahoma’s political landscape and – since he’s a Rush Springs native – watermelons.

Tell us about the Oklahoma Institute for Child Advocacy—when was the organization founded, and why? “The Oklahoma Institute for Child Advocacy (OICA) is a statewide nonprofit that lives up to our mission statement: ‘Creating awareness, taking action and supporting policy to improve the health, safety and well-being of Oklahoma’s children.’ The organization was founded in 1983 because of the ‘Terry D Lawsuit,’ brought forward by seven teenage plaintiffs in the custody of the Department of Human Services. The lawsuit documented instances of abuse and generally horrific conditions faced by Oklahoma children in state custody. This generated a Gannett news report called ‘Oklahoma’s Shame,’ which led to massive changes in the child welfare system. The creation of OICA as a voice for children was a part of that reform.

How does the work you do affect Oklahoma families? “The advocacy portion of our work seeks to positively impact public policy and lawmaking both in the legislature and at the agency level. We are also a resource to lawmakers that can provide statistical data and research regarding child well-being. We also have a direct-service portion of our work: That includes programs like OK Foster Wishes, which provides holiday gifts to thousands of foster children, and OK-LEAD, the leadership symposium we developed to help build self-worth and teach life skills to high school students.”

We know that horrific things that happen to kids can have long-lasting effects on their lives; what is OICA doing to combat that? “One of the things OICA is doing is helping lawmakers understand how Adverse Childhood Experiences (ACEs) impact young Oklahomans well into adulthood, and what we can do to minimize the impact of these unfortunate circumstances. OICA championed legislation to create a three-year task force to look at ACEs with two goals: 1) reducing the number of Oklahoma children exposed to ACEs, and 2) evaluating policies that can lessen the profound impact these negative experiences have on children, even following them into adulthood.

“We also work to raise awareness about existing policies that do not work, and encourage lawmakers to seek improvements (with the help of thousands of individual advocates who work with OICA). For example, OICA has been actively pushing for criminal justice reform to reduce our prison population and help keep more families together.”

The state Department of Human Services is routinely in the news for child welfare issues. And, according to news reports last summer, their “Pinnacle Plan” is still falling short in some areas. What can OICA do to help protect children?

“We continue to urge lawmakers to adequately fund the Pinnacle Plan, and to give DHS the resources it needs to deliver a successful outcome. Additionally, we help raise awareness when specific cases of abuse or neglect are brought forward by the Oklahoma Commission on Children and Youth (an organization founded in the wake of the same ‘Terry D Lawsuit’ that led to the creation of OICA). We are a policy organization, but we are also often the connector for individuals to help find the right resource to assist them.”

All kids deserve a happy childhood. How is OICA working to make sure they have one? “Our daily desktop calendar is published with a different child-related statistic on each of the 365 days of the year. We use this to raise awareness with elected officials about the problems faced by children in our state. We also highlight a different youth program on each of the days to show what organizations are out there helping make a difference for the children of our state. If the public and private sector can work together to find solutions, this will improve the health, well-being and happiness of Oklahoma’s 900,000 children.”

When did you first become aware of the work OICA does? “I first became aware of the work done by OICA as a staff member of the Oklahoma House of Representatives back when I worked there. When I was elected to the House in 2002, I became much more aware of their work, and even presented on one of their panels during the annual OICA Fall Forum. I was fortunate to be selected as the CEO of OICA in 2016, and have loved carrying on this mission each day since.”

Talk a bit about fostering—what is OICA’s role? “Our organization is set up to help encourage improvement of the policies overseeing foster care, and we work directly to assist foster families with OK Foster Wishes. We recently sent a mailing to about 450 Oklahoma churches asking them to consider participation in the 111 Project and the CarePortal – this is a conduit for churches to recruit foster families and help local foster families in need of some type of service or item. We also help fulfill the wish lists in December for every child in foster care through OK Foster Wishes who is not taken by another organization or individual. OICA is responsible for fulfilling more than half of the 8,500 foster children’s wish lists submitted to DHS.”

On a personal note, you were in the state House of Representatives for 12 years and also ran for Governor. What do you see on the horizon for Oklahoma, and the United States? “I am optimistic about the near future in Oklahoma! I would not have run for office if I did not feel I could make a difference, and I have not let an election loss stop me. I believe there are many lawmakers, both state and federal, who truly care about improving the well-being of children, and I see it as my job, and that of OICA, to educate them and provide realistic solutions to help us solve many of the problems faced in our society. There have been some great new laws passed at both the state and federal level that support the kids of our nation, and I am happy that we have been a part of some of those through our advocacy efforts.”

Any plans to return to politics? “I do not feel like I have ventured too far from politics in this new role. I have enjoyed the work with OICA, and know we can continue to improve outcomes for the kids of our state with the folks who have joined with us. I do not know if I will ever run for office again, but I am certain that as long as I am able to be an advocate with the lawmakers on both sides of the aisle in both chambers of the state Capitol, I will feel like I am making a difference for improving Oklahoma … maybe even more so than holding an elective office.”

Finally, you’re from Rush Springs. How were the watermelons last summer? “The watermelon crop was superb! You can take the boy out of Rush Springs, but not vice-versa. I was proud to serve as the chairman of the festival for several years with our local Lions Club; I even still assist the local lawmakers in holding Watermelon Day at the Capitol to promote the festival. I have moved to Oklahoma City since taking this new job, and have shifted my after-work activities to helping run Bricktown Rotary as their President. We are gearing up for the 20th anniversary of the Warren Spahn Awards, which honors the top left-handed pitcher in Major League Baseball, as well as the top high school baseball and softball players in our state. If you join us at the banquet on January 25 at the Skirvin, we can talk baseball, watermelons and what we need to do in Oklahoma to help our children.”