Judy Hatfield: Doing It All - 405 Magazine 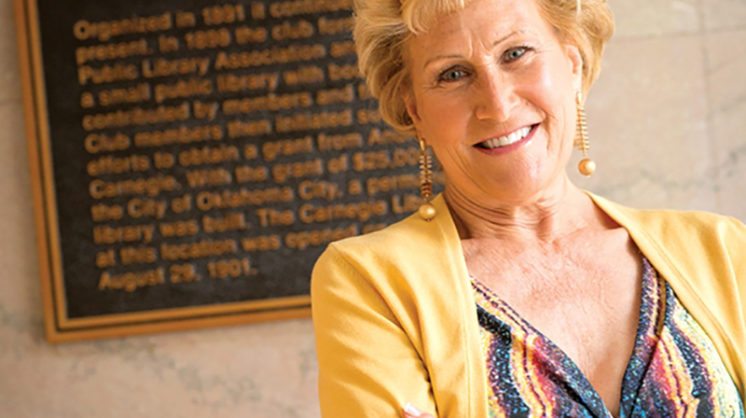 Long before I sat down for an exchange with commercial real estate developer Judy Hatfield, I’d heard she was Wonder Woman, A hybrid of a one-woman army and the Tasmanian Devil.

The Hype Is Real.

Whether it comes from being surrounded by a universe of Y-chromosomes throughout her life (three brothers, two sons, three grandsons and a succession of jobs in male-dominated professions came up during our conversation), or it’s because she innately believes in the strength of women, Hatfield lives up to her billing as a female trailblazer in every way.

Were you the high school valedictorian, by chance?

Yes, I was. My dad made a bet with me when I was just starting school. He told me that if I graduated as the valedictorian of my class, he’d buy me a car. So I really did it for the car. And mostly just to win the bet.

And the car was?

A Cougar – one of those with headlights that opened and shut, which I thought was so cool, until they randomly started shutting at the most inconvenient times, like on a rainy night – a slight defect in an otherwise great car.

Where did you attend college?

The University of Oklahoma, where I earned a BBA in finance and a minor in economics.

I know many women business owners and principals today, but when you began your career, you were really a pioneer to be a woman in the corporate positions you held.

I was the first female controller of the Westinghouse Electric Corporation plant in the ‘70s. I then became the first vice president of finance for TOTCO, a division of Baker International (later Baker Hughes), but I always knew I’d eventually own my own company.

You’re now the president and CEO of Equity Commercial Realty LLC, and Equity Realty Inc., which are hugely successful companies. What makes you so ideally suited for your profession?

I think it aligns well with what I’m best at: organizing chaos. I also think it’s a good fit because I’m right- and left-brained, so I can be a CPA and a strategic planner.

What’s your favorite kind of chaos?

And you’re good at them. I know you’ve been recognized at least twice this year for your work.

Yes – I was recently honored with the Neal Horton Award (at the 29th annual Dean A. McGee Awards Ceremony) for the renaissance of the downtown Oklahoma City area, and I received the History Maker Award (for Metropolitan Better Living Center).

Congratulations! The Carnegie Centre (131 Dean A. McGee) must have inspired some of those accolades.

It was a great project to redevelop the former downtown library – a true historic property – into residential, retail and commercial space. In the lobby, there’s a plaque that pays homage to the women’s club that raised the $25,000 it took to build the original Carnegie Library.

Knowing so much Oklahoma history must be an occupational hazard in your line of work.

Sometimes I’m surprised by how much historical trivia I’ve picked up over the years. I learn something new with each project, and there are buildings I’ve sold at least four times.

The first time I heard your name, it was in connection with Sooner Stilettos. How did that organization come about?

Sooner Stilettos is an organization I started with OU women’s basketball head coach Sherry Coale, who’s famous for her stilettos, to mentor the players and serve as positive female role models for them. We spend time with the players, and often the players can shadow us in our businesses to learn more about different professions and what it takes to be a strong, female leader in our respective career fields.

What are you currently obsessed with?

Spending time with my three grandsons.

When do you have time to sleep?

My nights are usually short. I’m an early riser and always on the move. I hardly ever run out of steam, unless it’s 100-plus degrees outside and I’m on a brush hog on my ranch.

What do you wish you’d started doing sooner?

Taking risks. I was too conservative. I wish I’d taken more risks.

What’s still on your bottomless list of things to do?

Wow – my list is so long. I want to see everything, do everything, touch everything, give everything and live every day to its fullest. That’s what I try to do now. I’ve had some great experiences. I feel like a very lucky person.