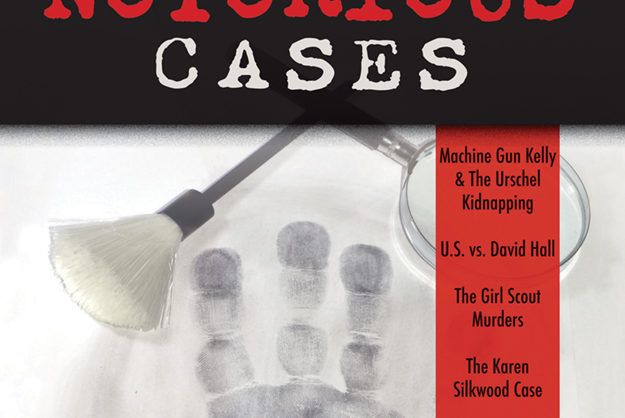 Each of the six cases in this book helped shape the history of Oklahoma. Each in its own way tells us not just the story of a crime, but something more about Oklahoma and Oklahomans.”  So says
Kent Frates in the introduction to his latest work, “Oklahoma’s Most Notorious Cases,” before recounting the tales of some of the state’s legendary dark moments: William Urschel’s kidnapping by Machine Gun Kelly, Governor David Hall’s bribery trial, the Girl Scout Murders, Karen Silkwood’s battle with Kerr-McGee, the Sirloin Stockade murders and finally the OKC bombing.

Even if you skipped the author’s bio, it’s pretty easy to guess Frates has a legal background (he’s been practicing law for 50 years); the stories as presented are filled with proper names, specific dates and verifiable details. Sentences tend to be short declarations of fact or supportable conclusions, not convoluted swirls of adjectives and subjunctive clauses. That narrative approach gives the proceedings a clarity and propulsive momentum, moving events along while still weaving them into a story rather than a dry recitation of court records.

Fundamentally, the primary element of the title “Oklahoma’s Most Notorious Cases” is not the third word, but the fourth: Frates is less interested in piling on lurid details than in recounting how the justice system responded to tests of landmark importance. The result is an occasionally grim but thoroughly gripping read.