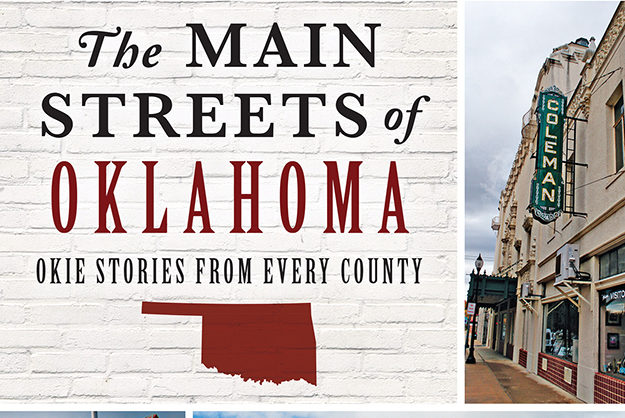 When she began working on a new book to be published by The History Press, roving reporter Kristi Eaton decided to take her show on the roads – dozens of them. In “The Main Streets of Oklahoma,” she visited the main drag of a town in every one of our state’s 77 counties, meeting new people, poking into local legends, sharing the stories and flotsam of history that give the communities their character … sort of a self-imposed exile on Main Streets.

Eaton’s travels focused on the more minor burgs – Noble rather than Norman, Arcadia instead of OKC – which gives her discovered tales the closely knit small-town vibe she praises in the introduction, but also shades the book with an undertone of melancholy: many small towns aren’t doing so well, and a number of entries discuss rocky economies and dwindling populations. Still, there’s plenty to see and stories to relish from towns near (Lucille’s Restaurant in Mulhall or the recently re-illuminated Yukon’s Best Flour Mill) and far (a monument to the time the panhandle’s Boise City was accidentally bombed by the U.S. Air Force during World War II). One anecdote is a handy antidote to gloom: Wetumka’s Sucker Day Festival. The town was once bamboozled by a fast-talking flim-flammer into preparing for a nonexistent circus, but rather than sweep their embarrassment under the communal rug, they took matters into their own hands. Over 60 years later, they’re still marking the occasion with a party all their own. That’s a spirit worth celebrating.