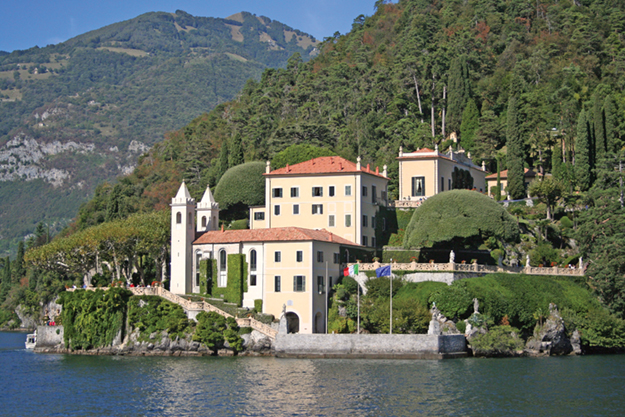 The Mountains Slide Swiftly Into The Depths of The Lake. Unlike Tuscany where the villages perch atop hills for visual advantage and protection, here they cluster at the lake’s edge, connected by narrow roads carved out of solid rock. Boats crisscross between tiny towns at all hours of the day.

Long past sunrise on the plains to the south, the sun struggles to peek over the mountains. The light shifts and changes by the minute, first hitting the lush green mountaintops on the west side of the lake. Eventually, the beams reach the water’s edge, highlighting the red tile roofs and the peach and cream buildings. The bells from the church start to peal and the day begins in Argegno.

Argegno dates back to Roman times, though little evidence remains – perhaps the arched bridge over the River Telo, but documentation is scarce. The population today hovers under 1,000. It boasts no major tourist attractions – just beauty and the joy of discovering how the locals live. It makes a great home base for relaxing; as the Italians say, “Dolce far niente – sweet doing nothing.”

That doesn’t mean there’s nothing to do. Put on your walking shoes and explore the steep, narrow lanes of the old town. There are few shops and those keep erratic hours. Don’t look for a grocery store. A couple of small shops carry necessities. We found a small alimentari where, with lots of pointing and a little basic Italian, we procured sandwiches of deli meats and fresh, crusty bread for picnicking on several of our days’ jaunts.

Thanks to the regular ferry service, it’s easy to visit towns up and down Lake Como. While many favor Bellagio, we spent more time in charming little Varenna on the east side of the lake and Menaggio, Lenno and Tremezzo on the Argegno side. Tremezzo is the location of the Villa Carlotta, a 17th-century villa noted for its art and gardens.

Near Lenno, from the boat, we spotted Richard Branson’s mansion – apparently being a Virgin can be profitable. On the southeast side of Lenno is the beautiful Villa del Balbianello. Built for a Prince of the Church in the late 18th century, its ultimate owner was a wealthy explorer who filled the villa with art and mementos of his travels. The setting was used in several movies including “Star Wars: Episode II” and “Casino Royale.”

Lenno is also the starting point for a walk up the mountain to a series of 14 shrines (1635-1710) leading to the Santuario della Madonna del Soccorso, which dates back to the 1500s. The walk is described as “easy,” however my son-in-law’s assessment can only be nicely translated as “easy to a mountain goat.”

Though the lakeside vistas were breathtaking, we got a bird’s-eye view by taking a cable car from Argegno to the mountainside village of Pigra. In the center of the town is a covered stone trough where, before electricity, the women would gather to do their washing. There is still one older resident (without a washing machine) who does her laundry the old-fashioned way.

There was nothing old-fashioned about our home away from home. Bed and breakfast owners Paul Wright and Nicole Andrew are British ex-pats who live in Argegno. Nicole commutes daily to Milan, where she works in the British Embassy, and Paul is an artist whose work can take him anywhere.

Their home is perched high on the side of the mountain above the main lake road. Multi-leveled and modern, the accommodations were bright and comfortable, the view was glorious and our hosts were exceptional. That they spoke English was a real plus; they not only gave us good local information, but made booking reservations and translating train schedules a breeze.

Balconies run the length of the front of the house, and our room had its own private balcony and lake view. Above our bed was a colorful assemblage created by Paul, and some of his watercolors decorated the walls. In his studio on the bottom floor, we enjoyed looking at more paintings and examples of some of his murals and trompe l’oeil work.

To many, Italy is synonymous with good food and, though we ate simply, we concur. Pizza was a mainstay meal and it was done very well at the Hotel Argegno. Traveling with a vegetarian (our daughter) and a veggie-hater (my husband Jack) presented some challenges but the Four Cheese Pizza with taleggio, gorgonzola, fontina and mozzarella pleased all palates. Lunches consisted of deli-selected breads, cheeses and (for Jack and me) meats.

The one thing we all agreed on was gelato. Walking as much as we did, we ate the icy treat at least once every day without worrying about weight. Our favorite spot was Il Gelato di Zoe – and not just because that’s our daughter’s name. We were adventuresome at first, trying flavors like fig and melon but quickly settled into favorites – wild cherry and dark chocolate.

I firmly believe that gelato has a terroir as important as wine. It simply tastes best in Italy. And to my mind, enjoying it in an outdoor café on the shores of Lake Como is as good as it gets.

Lake Como, shaped roughly like a man, is north of Milan. The town of Como is on the toe of the west leg, about 30 miles away. The most famous town on the lake is Bellagio. There’s not an easier way to say it – it’s in the crotch. Argegno is on the west side of the west leg.

Unless you have rented a car, getting to Argegno is a bit challenging. The train from Milan goes only as far as Como on the west side of the lake. From there, there’s a bus to Argegno – inexpensive, but remember you’ll be juggling luggage. Taking a taxi is also an option.

Learn a little Italian. “Grazie,” “prego” and “mi scusi” will get you smiles, but you need a bit more to find out “where,” “when” and “how much.” The Metropolitan Library System has beginner language courses in their database. They’re free and you’ll feel better prepared.

For information about the B&B, visit wrightart.com.