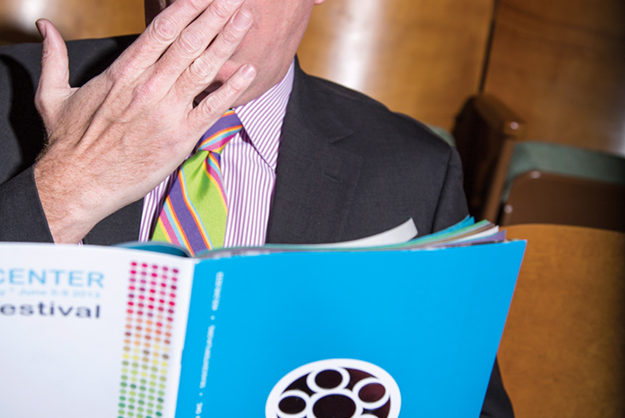 An Amittedly “Obsessed” Filmmaker And Film Aficionado, Lance McDaniel might be the best-suited man for his job as executive director for deadCENTER Film Festival, Oklahoma’s largest cinematic festival. His own credits include work on 14 feature films, including Oscar winner “Million Dollar Baby.”

When McDaniel isn’t busy (which is around the clock) writing, directing and reviewing one film after another, he confesses to taking “breaks” by watching movies. Luckily, he was willing to press “pause” long enough to visit with SLICE this month.

Where did you go to college? I went to Stanford University, where I got a degree in Communication, and I have a Masters in Liberal Arts from Oklahoma City University.

What was your previous incarnation before you began working in film? I lived in London, New York and San Francisco, working as an Internet consultant for 15 years.

What are you currently obsessed with? Downtown OKC! I moved downtown in November and I love being part of the energy of the urban core. When I left Oklahoma earlier in my career, downtown was deserted. I’m so proud to see its growth.

Do you indulge a guilty pleasure of any kind? Pistachios and Heath Bars. In addition to that, I watch movies obsessively!

What do you value most in your friends? Intelligence. Sense of humor. I want to surround myself with people who enjoy life. I don’t attract cynics!

Do you have a favorite hole-in-the-wall in Oklahoma City? Yes: El Sombrero, the Mexican restaurant a few doors down from Johnnie’s near May and Britton Road.

What do you wish you’d never sold or given away? I’ve moved so many times and every time I do, I give away tons of stuff. I’ve regretted getting rid of all of it! I’d love to have my original Star Wars action figures and GI Joes again.

Who do you think you could be mistaken for? My dad! People mistake us all the time – I just hope I don’t blow it for him one day!

Think of all the movies you’ve seen. What’s the last one that made you cry? “The Skeleton Twins” and “Dallas Buyers Club.”

Are you a night owl? Very much so.

Is that an occupational hazard? Even if I’m not watching movies for work, I’m still up until about 1 a.m.

Besides deadCENTER, do you have a nonprofit shout-out? Allied Arts has done so much for deadCENTER. I love Cleats for Kids, which donates athletic equipment to kids who need it. And I’m also passionate about an organization called ReMerge, which helps women who are facing incarceration to become productive citizens in their community.

What’s the best decision you ever made? Moving back to Oklahoma as an adult and the relationship I have with my family.

Are you early, late or on time? I’d say I’m almost on time – usually in a mad scramble – but I do get to the airport early. I just don’t need that stress.

Have you ever used algebra in real life? I used to work in the technology industry, so probably more than most. I was on the “Mathcounts” team in Edmond – it was verrrrry competitive! It helped me ace that part of the SAT.

Cereal? Yes. I make a mixture of Corn Chex and Cap’n Crunch Berries.

You must have a tough palate! Where are you most likely to be on a Friday night? Surprisingly, not at the movies! I’m more likely to be there on a weeknight. On a Friday night, I’ll probably be at a sporting event for my niece or nephew and, if I’m not there, I’d be on one of the city’s art walks … first Friday at Paseo, second Friday on the Plaza, third Friday here on Film Row and fourth Friday at H & 8th.

What are you most grateful for? My family and my amazing parents.

Who said it best? Abraham Lincoln. “Whatever you are, be a good one.”