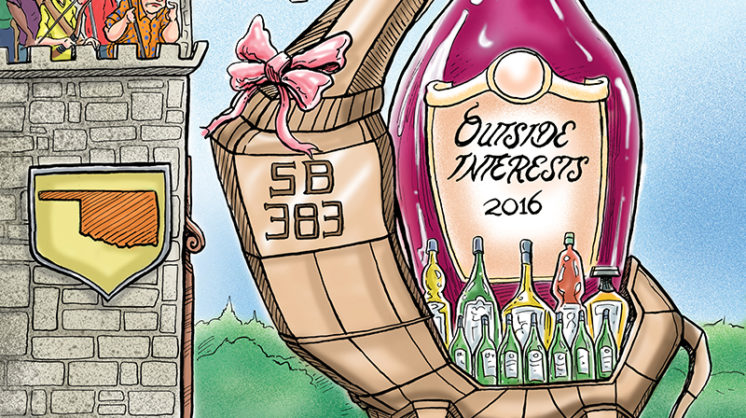 With the passage of SB 383 and SJR 68 in May, Oklahomans will be voting for large-scale changes to our alcoholic beverage laws in November. Rather than approach the reformation of our liquor laws conservatively, state legislators – notably Sens. Stephanie Bice and Clark Jolley – pushed to completely rewrite Article 28 of the state constitution, as well as Title 37 of the Oklahoma statutes. It’s essentially a total overhaul of how our state deals with alcohol, the main focus of which has been allowing the sale and purchase of strong beer (higher than 4 percent ABV) and wine of less than 15 percent ABV in retail locations such as grocery and convenience stores.

According to Bryan Kerr, president of the Retail Liquor Association of Oklahoma, SJR 68 repeals and replaces Article 28, and SB 383 replaces the language of Title 37, legislation that covers all Oklahoma statutes related to alcohol (beer, wine and liquor). In November, voters will decide on a state question to replace Article 28 with Article 28A, legislation that includes all the proposed verbiage from SB 383. If it passes – and SB 383 has already been approved by the Legislature and signed by the governor – some provisions will go into effect in 2017, but most will be delayed until October 2018.

Retailers and brokers (agents of the manufacturers) and some wholesalers in the state have raised strong objections to the legislation, but Bice (R-Oklahoma City) and Jolley (R-Edmond) have not responded to multiple requests for clarification of the bill’s verbiage. Matt Sterr, managing partner of Spirit Shop in Norman, called SB 383 a “wholesale change to the system to benefit out-of-state interests.”

Sterr said the legislation has been sold to consumers as a slate of new conveniences, but those conveniences are not without substantial consequences, most of which the retailers believe are bad for consumers.

When a piece of legislation is sold using words that are difficult to define or the definition of which is questionable (e.g., convenience, or modern versus archaic laws), it is worth looking at what is actually being sold. Convenience is a good thing, but liquor retailers insist there are multiple costs to these new conveniences, including a reduction in selection, a rise in prices, a loss of small businesses and a system that will be incredibly difficult to regulate. If local beer and boutique wines don’t end up in large retailers – and it is unlikely they will if the legislation passes – then consumers will be driving across town to one or two niche stores that carry their favorites.

Some of this is due to the tendency of retailers to maximize shelf space, meaning only high-volume products would be stocked – ones that cost less and have high name recognition, which is not to say the best available choices. Additionally, pricing is sure to go up at the wholesale level, as the current system guarantees that Oklahoma prices on a product offered by the distributors (wholesalers) can be no higher than the lowest price offered in the six surrounding states, and, according to Kerr, “the current wholesale model allows for unfettered competition among many different Oklahoma-owned wholesalers.”

“The legislation would create a franchising system much like Texas has,” Sterr says. “Their costs are 25-40 percent higher than ours.”

Modern here, it seems, means more expensive. Confusion arises when people drive to Texas and see their favorite bottle of liquor priced cheaper than it is in Oklahoma, but that is a function of the franchising system and usually only applies to a small number of offerings – special discounts to retailers on certain “loss-leader” items, much like Walmart operates. Under current Oklahoma law, those sorts of arrangements are illegal. All alcohol products coming into the state must be offered by all distributors at the same price.

While Sterr calls the franchising system the most egregious change to the laws – it would allow for price controls and gouging, for example – Kerr also points to the inequity in the way wine and strong beer will be handled in stores such as Walmart or Target if the legislation passes.

“A retailer in Oklahoma may now have one license to sell liquor, wine and beer, and a married couple may have two,” Kerr says, “but SJR 68 and SB 383 would give unlimited wine and beer licenses to large retailers like Walmart and 7-Eleven while maintaining that Oklahoma citizens would still only get one license per person.”

This is one of the provisions of the proposed law that has come under fire from opponents because it is fundamentally unjust. The extension of multiple licenses will lead to an expansion of wine and beer in retail locations, from the current 658 licensed establishments to more than 4,000 potential licensed establishments. This leads to Kerr’s strongest warning about the new legislation.

“ … Why are we going to send hundreds of millions in revenue out of state
to Walmart, Target and Costco?”

“How much more access will minors have once strong beer and wine are in more than 4,000 locations?” he asked. “In fact, there is nothing in the legislation to prevent 16-year-olds from handling alcohol at large retail locations. The legislation also reduces the age at which someone can sell stronger alcohol from 21 to 18. Is it really good public policy to increase underage access to stronger alcohol just to save grocery and convenience stores a few extra bucks in their hiring and training practices?” (This is one of the questions that proponents had not answered as of press time.)

Sterr has a timely and pragmatic question, too. “At a time when we are facing a $1 billion budget shortfall, why are we going to send hundreds of millions in revenue out of state to Walmart, Target and Costco?”

In addition to the revenues lost to out-of-state interests, there is also the question of impact on local businesses. Kerr said he expects that many mom-and-pop stores would have to close. High-volume bottles keep some of the smaller stores in business, but those high-volume bottles would be the ones that large retailers stock the most.

Alex Kroblin is the managing partner of Thirst Wine Merchants, a brokerage in Oklahoma. The brokerage tier is the most endangered as a whole in the proposed legislation. “We would essentially have to convert to a wholesaler,” Kroblin says. “That would mean expenditures on trucks, drivers, et cetera, or we would also have to sell our goods to whatever wholesalers would still be around.”

This is one of the more complex problems with the proposed system. The state’s two largest wholesalers – Central and Jarboe – would be able to create exclusive agreements with large brokerages; the state’s two largest are Republic National Distributing and Glazers (owned by Southern Wine & Spirits). According to SJR 68, those brokers would then be able to buy controlling interest in these same wholesalers, essentially designating themselves as the sole distributors of their family of products, representing more than 80 percent of the wine and spirits sold in our state. This is the heart of franchising.

According to Kerr, manufacturers would control their products’ distribution and pricing via exclusive agreements with and ownership in large wholesalers, thereby creating a veritable monopoly on specific brands – ironic given that proponents of SJR 68 and SB 338 accused the current licensed retail stores and distributors of having a monopoly under current legislation. In fact, the current system is rigged for competitiveness, as all entities have access to all products at the same prices from the brokers, and then have to compete at both the wholesale and retail level to offer the best prices to the consumer.

Are some elements of these proposed new laws beneficial to consumers? Certainly. Is the gain in convenience free from side effects as a result? Unfortunately not – and time, and the ballot box, will tell how strong a hit might be in store for all elements of the industry, including the customers.

► The Tab for New Legislation

• Prices held down by competition at every level.

• Restricted access for minors (not allowed in bars, liquor stores).

• One license per person and two for a married couple.

• Closed, franchise system with up to 90 percent of the market controlled by two distribution companies.

• Price increases due to lack of competition and additional cost of delivering to thousands of new outlets.

• One license per person, two for a married couple, and unlimited licenses for large retailers (Walmart, Target, 7-Eleven, etc.).