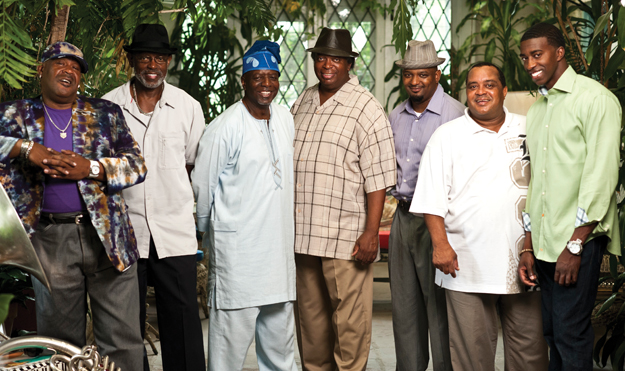 YOU SAY YOU'RE STAYING INDOORS TO AVOID A SUMMER SCORCHING? Fear not: music hath charms to soothe the savage heat, and it doesn’t get much more soothing than the sultry sounds on exhibition in this duo of free open-air music festivals. Consider them evidence that staying inside means you’re left out of a lot of fun.

It’s tempting to dub this event “A Tale of Two Icons,” since the 28th annual tribute to the musical legacy of OKC’s own Charlie Christian presented by the Black Liberated Arts Center (BLAC) Inc. also examines his connection with influential Oklahoma author Ralph Ellison – but that would give short shrift to the stature of the musical guests; a Who’s Who of titanic talents headed to Bricktown to show audiences how it’s done.

The festival begins by looking to the past. In partnership with the Ralph Ellison Centennial Celebration, the Oklahoma History Center hosts an exploration of overlapping legacies called “Ralph Ellison Understood Through Charlie Christian” June 4. The author was a friend of Christian’s family and a fan of the guitarist’s music; he wrote often about jazz and its implications for the concept of freedom in America, including one notable essay titled, “The Charlie Christian Story.” This free event provides a wealth of personal details about the two men and should foster a deeper appreciation for the cultural importance of the festival’s music.

Speaking of which: the Chickasaw Bricktown Ballpark is on the site of the original Douglass High School, which Christian and Ellison both attended and where they shared iconic music teacher Zelia N. Page Breaux. June 7-8 it will ring with music again, courtesy of some of the country’s elite talents. Friday night opens with Joe McBride, an incredibly gifted pianist who has been blind since his teens, followed by Edmond guitarist Matt Stansberry and his brawny backup band the Romance, and impeccably smooth jazz saxophonist par excellence Najee.

Saturday’s jam-packed lineup consists of Arkansas-born saxsmith Grady Nichols, the ebulliently guitar-driven Robert Banks Band, a bounty of beautiful boogie from the 11-piece All Funk Radio Show and – last but never least – Grammy-winning songwriter and saxophone virtuoso Kirk Whalum. Get out and enjoy … there’s no substitute for being there.

To paraphrase an Ian Fleming line, once is happenstance, twice is coincidence, 30 times is excellence itself. The venerable outpouring of world-renowned sound completes its third decade of free entertainment for Norman audiences with one of its all-time great performance slates.

The Thursday and Friday night sessions, held at the corner of Robinson and 36th Avenue N.W. in Brookhaven Village, are dubbed “Blues Under the Stars” and “Jazz Under the Stars” respectively, appellations that could refer either to the celestial bodies dotting the sky overhead or the stellar talents filling that sky with music. The stars of the stage include Parker Millsap, a songwriter, acoustic guitarist and harmonica player who is in the very early days of what demands to be a long and storied career; venerable blues guitar master Duke Robillard (B.B. King called him one of the greats); Tijuana Brass tribute group A Taste of Herb; and jazz guitarist Fareed Haque, who with his backup MathGames! slings out “jazztronica,” a technologically influenced sound of his own devising that’s carefully calculated to dazzle listeners.

On Saturday, after a series of free musical clinics, the groove moves to Andrews Park, where the Paseo Street Walkers, Norman High School Jazz Combo and soulfully crooning pianist Justin Echols set it up, and the Dirty Dozen Brass Band bring it home. The festival headliners incorporate all kinds of styles into their raucously joyful jams, using everything from funk and bebop to R&B and Caribbean beats to flavor the brassy jazz of their native New Orleans. If you haven’t seen them before, heads up: You may have trouble tearing yourself away until they’ve hit their last exuberant chord to cap off this milestone festival in marvelous style.