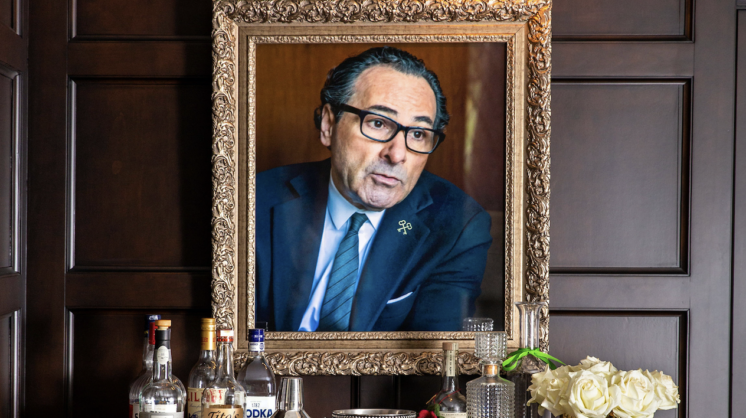 Assume you have numbered prints by Chagall, Miró and Picasso, and assume you are trying to decide which piece of art you will use as the focal point for your den—the room that contains your beautiful home bar. Andrea and John Ridley have the prints, including Miró’s colorful, whimsical, explosively geometric “Exhibition ‘XXII Salon de Mai’” in the den, but their choice to anchor the room and have the place of prominence over the bar fell to a very different 20th-century figure.

The Ridleys’ impressive art collection includes this abstract work by Joan Miró. A framed print of Dimitri Dimitrov hangs over the Baker bar.

“Dimitri Dimitrov was the maître d’ at Sunset Tower Hotel in Los Angeles for many years,” John Ridley said. “It was a frequent haunt of mine when I lived there. Dimitri is world-renowned for his hospitality, and I thought he was appropriate to build the room and bar around.”

In the Ridleys’ den, Dimitrov stares without apparent focus at a point in the room behind and to the right of the viewer. His gold Les Clefs d’Or pin and Tom Ford-esque eyewear are the only notable distractions from his impossible-to-read expression in the framed print of a Robert Landau photograph.

“I had seen the photograph years ago, and I thought it captured Dimitri well, so I tracked down the photographer and bought a print,” John said. The Ridleys displayed him in a gilded frame, an excellent complement to the room’s warm woods and brass fixtures and accents.

The room is bounded by beautiful raised paneling, but it’s saved from being too dark by well-placed splashes of brilliant colors: a beautiful spindle back chair to anchor the Miró, cerulean tufted leather wingback chairs in an eclectic grouping that also features an antique table with turned spindle legs and the open bar itself that cleverly leaves the colorful bottle labels exposed.

All of the beautiful touches aside, Dimitrov is the central focus—not just because he has what people would call an interesting face, but because his presence there immediately inspires the question: Who is that? What sort ofmaître d’ inspires Tom Ford to write a name on a napkin and pass it to Sunset Tower Hotel owner Jeff Klein who had complained about the difficulty of staffing his hotel? What makes the Macedonian-born Dimitrov so special?

“He has a very calming presence,” John Ridley said. “He knows everyone by name, and he knows details about our lives and our projects. He is faultlessly polite—he’ll always get the last ‘Thank you.’ He has a very gentle way, and he always knows what his guests need.”

Ridley isn’t alone in his admiration of Dimitrov. The man has inspired many articles that seem to wonder aloud at his impact on the A-list scene in L.A. In the Ridley house, though, he is totem and emblem, an embodiment of hospitality worthy of aspiration.

How a print of a famous maître d’ “fits” into the Ridley house isn’t really a concern from an aesthetic perspective, though (even though it does work), because the collection is very eclectic by design.

“Much of our home is John’s world,” Andrea Ridley said. “The art, however, is collaborative. It’s a lot of his collection mixed with pieces we’ve both found, and the collection includes everything from vintage to fine art. We look for pieces that create an emotional connection for us.”

The bar—a Baker found in Kohler, Wisconsin—moved from room to room before finding its final home in the den. It’s used for entertaining, not family happy hour. The crystal decanter from Bebe’s in Nichols Hills Plaza is a lovely, functional touch, even as Andrea describes their approach as more decorative than functional. It shows, inasmuch as the Ridleys seem to be more intuitive than intentional decorators; given the diversity of the collection, it’s probably a solid choice in methodology. John talks about editing the collection, and splitting it between home and offices helps, but he describes himself as someone “who loves stuff on the walls.” Given that, the diversity and profusion is likely to be an ongoing factor.

“When Dimitri landed over the bar, it just felt right,” Andrea said.