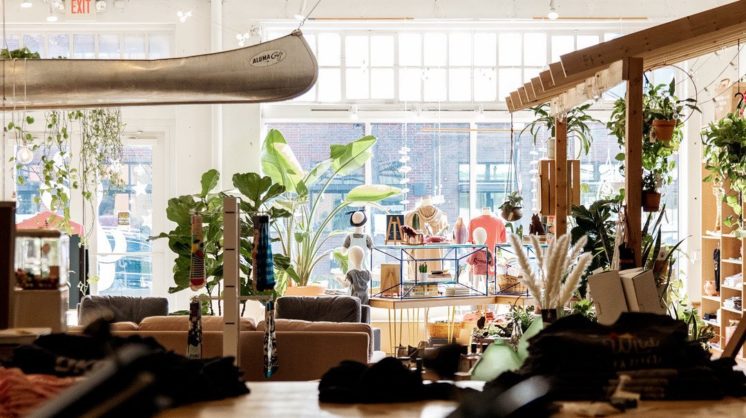 Mayor David Holt said that sales tax revenue was down only four percent in the quarter beginning in July, but local retailers say the number doesn’t adequately summarize their experience.

“The doors are open, but we’re not all fine,” Rachael Gruntmeir says. She owns Black Scintilla, a boutique in Midtown, and her year-to-year sales numbers were still down 50 percent in August this year. “Much of the focus has been on making sure restaurants are okay, and I don’t begrudge anyone help right now, but local retail needs to throw our hat in the ring, too. The money from the financial assistance programs is gone, and we’re still struggling.”

Holt said city government is limited in what it can do for small, local businesses. “We’re still looking at additional rounds of our small business continuity programs, but that’s not customers,” he says. “Ultimately, people have to start going in the stores or shopping local online.”

A dip of only four percent in sales tax revenue paints a rosier picture than what is warranted, according to Cleo Rajon, executive director of the Independent Shopkeepers Association.

“We’ve received some much-appreciated band-aids from the city in the form of two rounds of help: forgivable loans and grants,” Rajon says. “They definitely helped get stores going again, but it’s really only good for 30 days. Big box and online shopping are dominating now, and I understand the limitations of city government – I worked in it for five years – but if local retailers don’t get some help, we’re going to be in even worse trouble next year.”

Rajon’s ISA completed a consumer survey in mid-September that showed some disturbing trends in consumer attitudes and spending habits during the pandemic. “Big box retail is currently dominating but 75 percent of the respondents said they feel safer shopping local,” Gruntmeir said. “The perception, though, is that one stop is better than multiple stops at smaller retailers, but it’s apparent that you’ll come in contact with many, many more people in Target than you do in here.”

Seventy-five percent of respondents also said they still prefer having curbside pickup as an option, a telling insight into who shops locally. “Our customers are the same ones who take COVID seriously,” says Morgan Harris, owner of Green Bambino. “Curbside is important to them, so is checking store capacity, and walking customers through the sanitation process. It takes three times the employees during a pandemic as it did pre-COVID.”

Harris said she feels more fortunate than others because her numbers were only off 20 percent in July and 25 percent in August. “It hurts, but it’s not as catastrophic as [the difficulties] others are facing.”

That includes Caleb Arter, owner of Blue Seven. His overall numbers during COVID have been down roughly 90 percent, and he’s been forced to lay off 20 employees. “Some of them had been with me for 10 years or more,” he says. “We tried to reopen the first time, and immediately had a customer and an employee test positive, so we had to close again. It just sucks because much of our success over the years has been because we built conservatively, by not spending when we didn’t need to, and now none of that matters.”

Blue Seven has reopened with limited hours, but Saturday – ordinarily a big shopping day – is not one of them. “I’d have to hire five new employees to be open on Saturday, and I can’t do that right now.”

Arter stressed that he’s not been the type to ask for help in the past. “Everyone is hurting right now,” he says, “and I don’t feel comfortable making people feel guilty about not shopping local, but at the end of the day, what is happening now is not sustainable.”

Because the sales tax revenue numbers were not itemized, Holt speculated that the difficulties faced by local retailers might be on a neighborhood by neighborhood basis, with downtown doing substantially worse because traffic, especially work traffic, has slowed considerably.

“People aren’t downtown as much as they were before COVID,” Holt says. “I’ve only been down here every couple weeks, and the lack of downtown workers has had an impact on business, for sure.”

It’s hard to verify that neighborhoods are an issue, and both Green Bambino and Blue 7 (which also have strong brand recognition) are outside the downtown core, but numbers aside, small retailers all over are hurting. Both Holt and the shopkeepers emphasized how important the city government can be in leading in the midst of COVID, especially with issues like public safety in the form of masks.

“There was an immediate and noticeable difference in traffic after the mask mandate went into effect,” Gruntmeir says. “More people felt safe to come out, and it removed the onus from retailers to be the ‘bad guy’ in terms of masking policy.”

But public safety and shopping are not simply a matter of mandates. “I walk a fine line as a mayor between telling people to shop and knowing we don’t want too many people in one building,” Holt says. “Still, there are very few activities I’d tell people who are taking proper precautions to avoid, and shopping is not on that list.”

Rajon said one of the areas local retail had needed to address – ecommerce – was made even more critical during COVID. “Sixty percent of shops that did not have an ecommerce website prior to March now have one,” she says. “The ISA website has a hub now where people can find local businesses that have ecommerce options.”

Gruntmeir said customers who prefer ecommerce are often not aware how fast shipping can happen locally. “I’m shipping stuff every day,” she says. “If you live in the metro, you can get your items the next day. We do it all the time. It’s just such a habit to click on Amazon, but we’re here, too, and we’re here when there are issues. Here and accountable.”