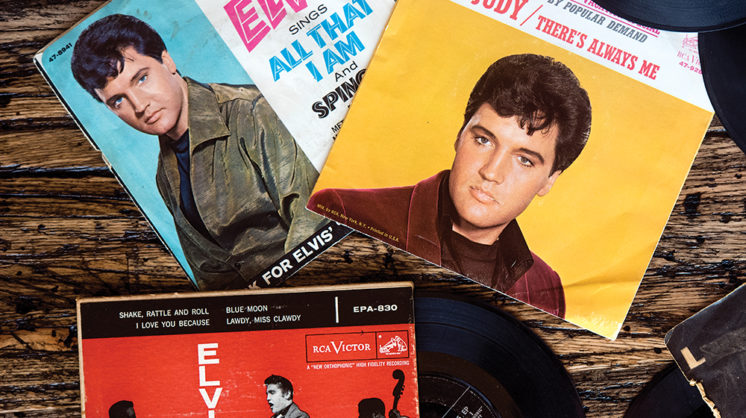 It was an overcast August day in Oklahoma City, warm and humid, as occasional light rain fell from the low-hanging clouds. Patricia Goodpasture was waiting on customers at her store when she heard the news.

“Someone walked in and said ‘Elvis Presley just died,’” she says. “It was one of those things you will always remember, like where you were when President Kennedy was shot.”

Presley died at his home in Memphis 40 years ago this summer, on August 16, 1977. His death stunned fans around the world, including Oklahoma. Goodpasture was 27 years old at the time and had come of age listening to Presley’s music.

“Of course, his early hits in the ’50s were influential in the development of rock and roll,” Goodpasture says, “and I loved those songs as a kid. But as I entered my teenage years in the ’60s, that’s when I really became a fan. He was still making records, but he was also making movies like Blue Hawaii and Viva Las Vegas, and I saw them all!”

Those were good years, she said, and while Presley may be gone, the memories and his music are very much alive.

“I remember walking home after school with my best friend Judy,” Goodpasture says. “We would get her little portable record player out and dance to the Mamas and the Papas, Nancy Sinatra, the Supremes – all the great groups that were popular then. But our favorite was Elvis. Judy’s mom was an Elvis fan in the ’50s, and sometimes she would even dance with us. She did a great jitterbug, and it was a hoot! Today I still love his music, and I listen to the Elvis channel on Sirius a lot. After all these years, his music never gets old.”

“It was a couple of years before I moved to Oklahoma City,” Elliott recalls, “and I was working the afternoon drive shift at KRIZ radio in Phoenix. The station was a very ‘Top-40’ format.

Needless to say, when he died, we brought out all the Elvis we could find and did a tribute broadcast.”

Presley was instrumental in breaking new ground, Elliott said, bringing to light a style of music previously unknown to many people.

“There were numerous black artists who created similar sounds, but due to white radio programmers keeping things white in the 1950s, those black artists weren’t heard on mainstream radio,” Elliott says. “Elvis had a very soulful sound. He wasn’t a songwriter, as the Beatles were, but he could take most songs and make them his own.”

One of the first times Presley performed in Oklahoma City was in 1955, at the Municipal Auditorium, now the Civic Center. Through the years, he always came back to perform for sell-out crowds, with fans camping out and standing in line for hours, sometimes overnight.

Four decades after his death, Elliott said it will take a continued historical review of Elvis’ life to allow new generations to learn of his rise to fame.

“After 40 years, the music of Elvis Presley is still well received,” Elliott says. “Movies, television ads and other productions feature his music. Radio stations with oldies and classic country formats still fire up the Elvis from time to time. As long as there are fans who were alive during his reign, the legacy will remain strong. No telling how his legacy will carry on a hundred years from now … I have a hunch he will still be known as ‘The King.’”