Making it in California - 405 Magazine 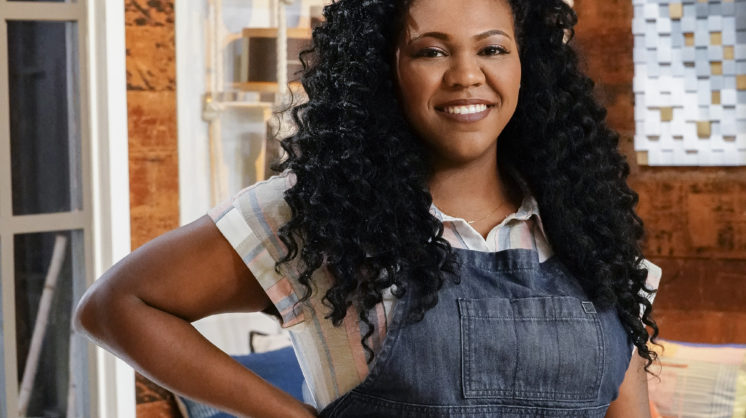 Ashley Basnight is a North Carolina native, but the Norman resident came to Oklahoma six years ago to work as a software engineer for Boeing. Because she works on Boeing’s B-52 Stratofortress bomber, her job is classified, so there is very little she can say about it. The same is true of her appearance on “Making It.” The season premieres on NBC on December 2, and while filming is wrapped up, Basnight can’t discuss her performance or the winning “maker.”

“Working with the other makers was exciting,” she said. “It’s a different take on a reality show because we all help each other out.” The program pits ten makers against each other in an elimination format, but the makers are typically required to work together in short-term collaborations. As with most elimination formats, one contestant is removed from the show in each episode. Given Basnight’s specialty, it’s likely that her contributions were related to woodworking.

“In 2016, I was looking for a custom kitchen table,” she said. “The ones I was looking at were so expensive, so with some encouragement from a group of custom furniture builders, I decided to build one myself.”

Growing up in North Carolina, she learned how to use tools while working with her father. “I was always comfortable around tools,” she said. “My father and I worked on cars together, but I got a love of art and creativity from my mom. I combined those things from my parents to begin making things.”

She built her table, and then decided she could build other things to sell. Early on, she put things on Instagram, and it was on that platform that a blogger suggested she giving blogging a try. Three years later, Handmade Haven has tens of thousands of page views monthly, her YouTube channel has more than a thousand subscribers, and her social media channels have more than fifty thousand followers.

That’s how Home Depot found her five years ago. They have been a sponsor since, as is well-known power tool brand Ryobi. “I was shocked when Home Depot reached out to me,” she said. “I was only about six months into the Instagram thing, so I didn’t expect sponsorship that quickly.”

Basnight posts one to two videos a week on her YouTube channel, and her work has been featured in “Better Homes and Gardens,” “Country Living,” and BuzzFeed. The NBC opportunity arose as a result of a casting call.

“I saw that they were looking to cast a new season, so I applied,” she said. “I went through the interview process, and was accepted.”

She had to arrive in California about a month ahead of filming, but she said her manager at Boeing was perhaps more excited than she about the prospects of her being on the show. “Boeing has been great, very supportive,” she said, “and my family is over the moon. My parents keep telling random strangers, ‘Our daughter is going to be on NBC.’”

Amy Poehler and Nick Offerman are the show’s hosts, and while they’re not reprising their “Parks and Recreation” roles of Leslie Knope and Ron Swanson—names that have entered deeply into the lexicon of pop culture, including multiple memes—the appeal of seeing the two together on screen is certainly part of the draw of “Making It.”

Basnight said she’s never been a star-struck type, but there was a little trepidation when first getting on a soundstage with two stars like Poehler and Swanson. “You get used to it, though,” she said, “and they’re so nice; that definitely helps.”