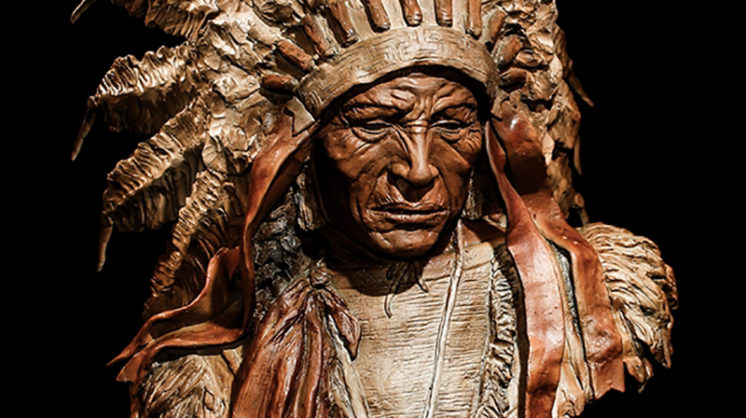 The Paseo gallery’s March exhibit, “Western Bronze,” demonstrates that the soul of a work is in the details. Each piece is at once a testament to the skill and dedication HR Kaiser has poured into honing her award-winning craft, and to the strength of the inspiration she finds in the faces, figures and animating spirits of the exemplars of the American West these sculptures portray.

Portraits From the Artists As Young Men (and Women)

The call went out earlier this year for high school students’ prime photographic accomplishments; the 50 pieces hanging in the FAI Gallery that make up the Youth Visions exhibit represent the crème de la camera as selected by juror Terry Grider, who will award cash prizes to the best of these best as approbation for their already impressive compositional eyes.

One of the truly great voices in contemporary music, Oklahoma City native Sandi Patty has won five Grammys and was the Gospel Music Association’s female vocalist of the year for a staggering 11 consecutive years; she’ll be back home in the metro for UCO’s Broadway Tonight series with a retrospective concert called “Broadway Stories,” co-starring the Young Voices of Edmond in an evening of solid gold song.

If you’re watching Lyric Theatre’s new show and the faces start to run together, it’s understandable: the entire cast of characters is portrayed by only two actors, and they’re doing a fair amount of running. Someone has to keep the piano accompaniment going, after all. Fatality and farce go hand-in-hand for the musical corpse-driven comedy “Murder for Two.”

The Norman Arts Council spends the entirety of the year encouraging the creative drive of its city, but how many times a year does its grateful public get to support it via a rockin’ party? Hint: said party is called the ONE Event. Celebrate the street art vibe of ’80s NYC with food, music, a painted vinyl record raffle and more at “Beat Street.”

The Oklahoma City Museum of Art provides protein-packed treats every year at its Omelette Party; inspired by the upcoming Fabergé exhibit, this year’s chef-supplied concoctions are radiantly flavorful. Coupled with an art raffle, live performance by Stars and an open bar, it’s a scintillating reward for multiple senses. To miss out would be (sigh) egg-regious.

There are parties, and then there are gala events, and then there is Red Tie Night. The theme of the Oklahoma AIDS Care Fund’s 23rd annual fete – “Bigger, Better, Redder” – sets a lofty bar, since the event is already the state’s largest single-evening fundraiser. Don your symbolic scarlet neckwear and prepare to wine, dine, dance and enjoy the night away.

The Growth of Ideas

Film, performance, installations, even some paint on canvas – the Oklahoma Visual Arts Coalition’s Momentum event is a multi-media mashup showcasing and encouraging creative prowess in state artists under 30. With their innovations alongside a varied slate of live music, food trucks, a cash bar and door prizes, there should be plenty of attractions to draw visitors in.

The matrix of opportunities changes over time – we in this modern era may not have much chance to personally spearhead the artistic development of major universities … though on the other hand we have the ability to appreciate those who did. The FJJMA looks back at the personal work and immense influence of OU trailblazer Oscar Jacobson in “A World Unconquered.”