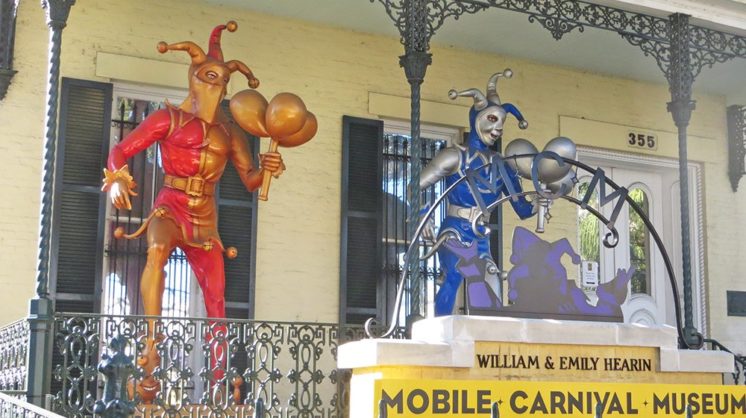 Mobile, Alabama, has all the moonlight and magnolias you could wish for in a Southern city. Live oaks weeping Spanish moss make green arches over many streets, and downtown is an interesting combination of sparkling contemporary construction blended with lacy, cast-iron balconies from the late 1870s. Mobile does Gone with the Wind with a bit of quirk.

You won’t be in town long before someone tells you that Mobile has the oldest Mardi Gras celebration in the country, dating back to 1703. While the entire town joins in the season’s parade fun and bead-mania, the celebration, albeit muted, can still be found year-round. Check out the Mobile Carnival Museum. Housed in a handsome 1837 mansion, it boasts the world’s largest collection of Mardi Gras royalty trains – not the choo-choo kind, but the befurred and bejeweled, dragging-behind kind.

In addition to the traditional Mardi Gras beads, parade participants throw Moon Pies. Apparently, before the 1970s, Cracker Jacks were popular options, but the sharp-cornered boxes were more like missiles than mementoes. The rounded, soft Moon Pies became the missile du jour.

Where other cities have New Year’s Eve drops featuring items such as a giant peach in Atlanta, a crystal ball in New York City and an eight-foot sardine in Eastport, Maine, Mobile drops a 12-foot, electrified Moon Pie from the top of the 34-story RSA Building. And for good measure, they drop it again several times leading up to the actual day of Mardi Gras.

The History Museum of Mobile is itself housed in a historic 1857 building, where visitors can view 300 years of the city’s history. Favorite areas include Old Ways New Days, exploring area activities from the time of early Native Americans, and French settlers through modern times. The exhibits on the cotton economy, slavery and Civil Rights are particularly interesting. A dark hall takes visitors into the hull of a slave ship. The cringe-worthy exhibit features the soles of feet showing how slaves were stacked like cordwood for the arduous voyage to America.

On a much lighter note, the Friedman Miniature House Gallery is an amazing display of tiny scale versions of Mobile and Alabama houses, built by a grandfather for his granddaughters.

One of the more unusual sites to tour is Gulf Quest, the National Maritime Museum of the Gulf of Mexico. Perched on the west bank of the Mobile River, the museum looks like a large container ship – even the floors are designated as decks – which makes sense since modern container ships and the efficiency they introduced were developed here. Exhibits focus on commerce, shipping, ships, navigation, undersea exploration … the list goes on. One of my favorite areas was an interactive exhibit on extreme storms, showing how storms develop, how forecasters try to determine possible paths and what safety measures should be taken. Visitors get a chance to make these predictions. Will the results be heroic or disastrous? 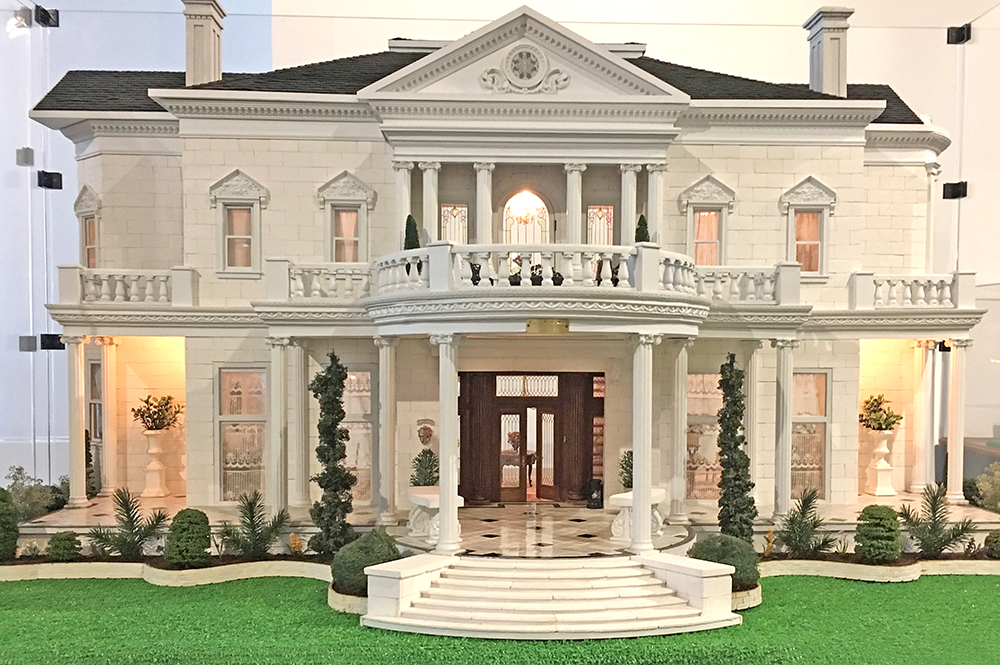 The Mobile Museum of Art has a permanent collection of approximately 10,000 items – though only a small percentage is on display at any one time. The collections of craft objects and decorative arts are particularly strong, along with 19th century American landscapes and realist paintings from the WPA era. Both the building and grounds are particularly attractive, and a large camera obscura gets a lot of attention from guests.

Bellingrath Gardens, a short drive out of Mobile, is my favorite do-not-miss spot. This gorgeous property was intended by owner Walter Bellingrath as a getaway fishing camp. That was until Mrs. Bellingrath got hold of it. She told her husband, “If I’m going to spend time down there, I am going to have it looking nice.” And she did.

The 65 acres of gardens include thousands of azaleas in spring and cascades of chrysanthemums in fall. Summer is awash with colorful annuals and roses. Even in winter, the garden’s camellias are blooming, Christmas lights sparkle in the garden, and interior spaces feature a plethora of poinsettias.

A package tour, which includes both the garden and the 15-room mansion, is worth the price. Stories told by the docents make this more than just a photo op stop – it’s a history of an amazing couple. I’ve been to Bellingrath at least three times, but there are still parts I haven’t seen. While I’m always drawn to the Mirror Lake and the Asian-American Garden, there’s so much more to explore. Next visit, I’m determined to walk the Bayou Boardwalk, which provides a wild contrast to the order of the formal gardens. So my advice is to plan plenty of time to smell the roses – or whatever else is blooming. 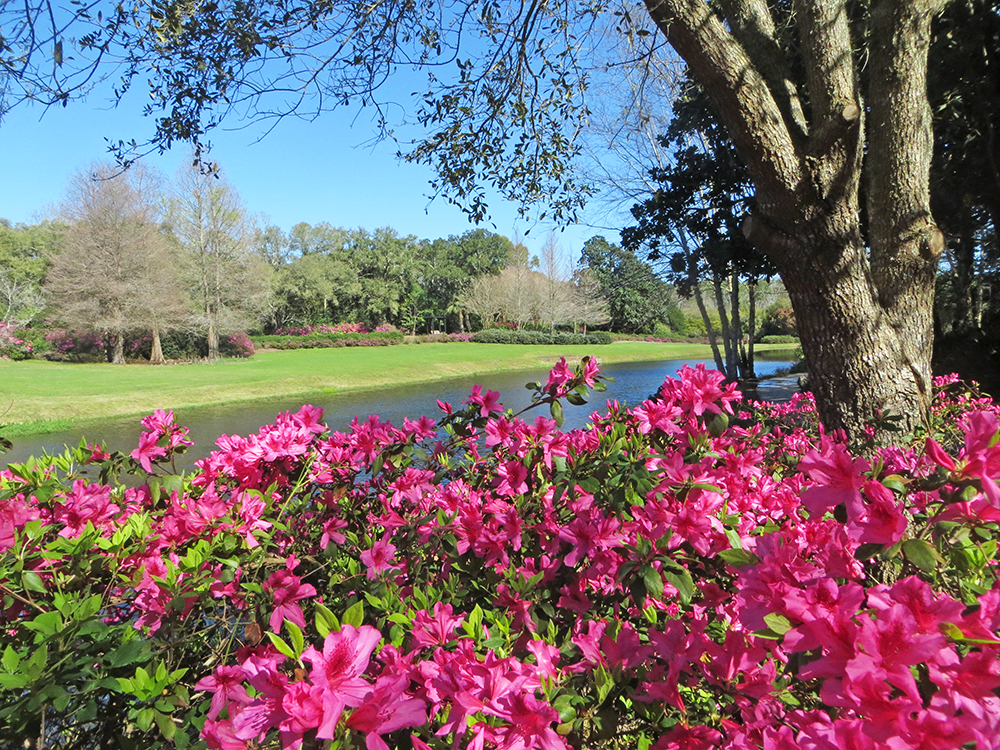 S in Mobile stands for Suppin’, Shoppin’ and Sleepin’. You won’t go hungry in Mobile. Of course, seafood is a big thing here. Go full tourist at Wintzell’s, the place to go for oysters since 1938. Their slogan, “Fried, stewed or nude,” refers to the oysters, not the customers … although you could probably make at least two out of three with their signature cocktail, the Dragon Drink.

Still on the casual side, don’t miss Callaghan’s Irish Social Club. Situated in the historic Oakleigh neighborhood, this is the closest thing to a “local.” Your best bet is one of their burgers, since the bacon cheeseburger is listed as one of the “100 Things to Eat in Alabama before You Die.”

Spot of Tea does have an array of dessert teas and breakfast teas, but this is no frou-frou ladies’ place. It’s great for breakfast or lunch. One of the specialties is Eggs Cathedral – a grilled English muffin topped with a crab cake, scrambled eggs and home-made seafood sauce incorporating blackened grouper and crawfish – hash browns on the side. This dish and the Bananas Foster French Toast both made the Alabama 100, too. For the ultimate sugar high, go for the Moon Pie Puddin’.

Noble South wins raves for Chef/Owner Chris Rainosek’s twists on Southern favorites. The menu is limited, but that means every dish gets special attention. Readers of the local indie publication Lagniappe voted Noble South’s shrimp and grits the best entrée, and Rainosek the best chef.

For an upscale night out, make a reservation at Dauphin’s atop the towering Trustmark Bank Building. The food was great, the view magnificent –  the highest waterfront view between the Everglades and Texas – and the meal ended with a fiery flourish. Owner Bob Baumhower, five-time Pro-Bowl selection footballer and former Miami Dolphin, named this premier dessert after his wife. Leslie’s Passion includes butter, brown sugar, Chambord, Gran Marnier and fruit, flambéed and poured over ice cream. It’s truly a died-and-gone-to-heaven treat. 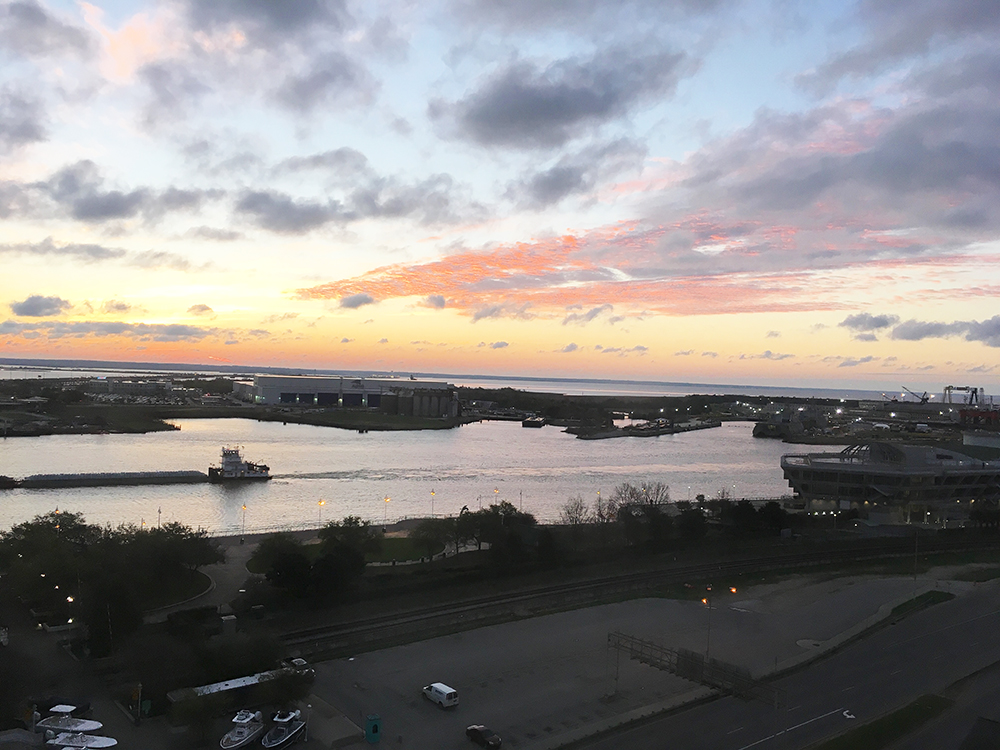 My trip was so full of sight-seeing, it left little time for shopping. But no trip to Mobile is complete without time to stroll down historic Dauphin Street. It’s chock-a-block with eateries and nightspots, but in between, there are some great shopping stops.

The Mobile Arts Council has a nice sales gallery of local art, with shows changing monthly. If the timing’s right, catch the LoDa (Lower Dauphin) Art Walk the second Friday of each month.

Two spots are good for tasty treats: Century-old Three Georges Southern Chocolate’s Heavenly Hash – marshmallows and pecans covered in chocolate – lives up to its name. Across the street and down the block, step into the A & M Peanut Company for fresh-roasted peanuts and other nutty treats.

A great place to stay that’s close to Gulf Quest, the History Museum and the delights of Dauphin Street is the cool, contemporary Renaissance Mobile Riverview Plaza Hotel, my host hotel. Nearby, the Battle House Hotel, a sister property, exhibits the elegance of a bygone era and an interesting history.