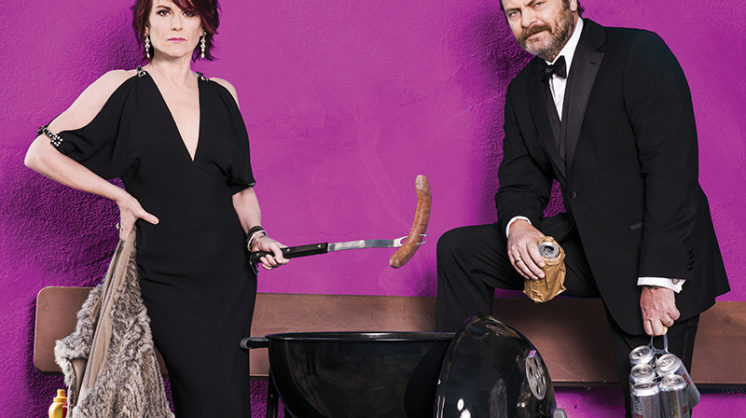 It’s been 10 years since the NBC sitcom “Will & Grace” ended, putting an end to the eight-season run during which Oklahoma City native Megan Mullally portrayed boozy-but-loveable socialite Karen Walker.

In the decade since the show went off the air, the Emmy-winning actress has re-invented herself time and again. There was her stint as a daytime talk show host, as lead singer for her band “Supreme Music Program” and, more recently, her cabaret act “Nancy and Beth” with actress Stephanie Hunt.

Now Mullally’s latest incarnation is a tour with her husband, actor Nick Offerman. The couple brings their show “The Summer of 69: No Apostrophe” to Norman’s Riverwind Casino for one performance July 30.

“Don’t bring your 7-year-olds to this show,” Mullally says during an interview with 405 Magazine from her Los Angeles home. “This is certainly for adult audiences. We started this tour last year and Oklahoma City was our first show, and it’s also our first show this year. It’s actually changed quite a bit from when we first started doing it. We have a lot more songs and a lot more fun. But it is somewhat adult material.”

Taking it to the people is what this show is all about, Mullally said. They rent a vehicle, load up their dog they got in Oklahoma City and hit the road.

“We just drive and listen to audio books,” she says. “We tour from city to city, stay in really low-end motels and basically have a blast doing it. We get to see a lot of the country. We are like the Partridge Family, except there are no kids and we’re not on a bus. And if we sing ‘I Think I Love You,’ we are putting a much different spin on that song!”

Coming back to Oklahoma City is always a treat, Mullally said. Her mom, Martha, still lives in the same Nichols Hills home she grew up in.

“Mom is doing well,” she says. “She is 94 now and has 24-hour care at home and she’s got her faculties and is doing great. She’s funny, and she still looks me up and down if she doesn’t approve of what I’m wearing. I did pretty well the last time I was home; I had one of my best approval ratings of the past several years. She liked my hair, and she liked my clothes.”

And home is still home, even though her childhood bedroom has changed a bit.

“My old bedroom is pretty stripped down,” Mullally explains. “Some of my stuff is still there, some of my books and some of my old clothes. But my mom turned it into kind of a guest-roomy kind of a room. Which was good – she should have, because it was crazily decorated in the ’70s. It had flowered wallpaper and a bright yellow beanbag chair. It was sort of ridiculous.”

On the heels of the “Summer of 69” tour, Mullally fans can see her on the big screen in the Fox comedy Why Him?, which stars James Franco and Bryan Cranston and hits theaters on Christmas Day.

Mullally still keeps up with her “Will & Grace” co-stars, she said, usually via text or Twitter. And where does she think her former alter-ego Karen Walker is now?
“She’s probably drunk off her ass somewhere,” Mullally laughs.

“I really hope everyone will come out and see us in ‘Summer of 69,’ because Oklahoma City is not only my hometown, it’s becoming a hometown for Nick, as well,” Mullally adds. “Of course, his hometown is Minooka, Illinois, but he has spent a lot of time in Oklahoma City. In fact, we’ve talked about getting a little place there. He likes all the friends I grew up with, and my mom and the neighbors – and he knows the city as well or better than I do. So come on out and support two daily Oklahomans.”