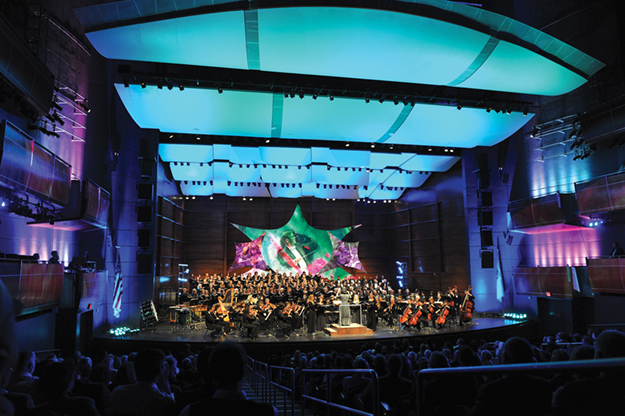 October 4, OKC Civic Center
To start its 45th season, Canterbury Choral Society is pulling out all the stops: Over 300 singers, including world-class soloists Penelope Shumate, Jeffrey Picon and Brandon Hendrickson, plus the power of the OKC Philharmonic, and a 3-D computer-assisted “projection map” of a spontaneous live painting by artist Chad Mount. This unprecedented, multi-layered performance of “Carmina Burana” is a stroke of great good fortune for metro aesthetes.

October 4, Festival Market Place
When some people see a problem, they try to fix it: small charity Edmond Mobile Meals has been helping feed the elderly, disabled and homebound for almost 40 years. But more gets done when people combine, so share and enjoy at the first EdFest, featuring beers from local breweries, tasty bites from food trucks and live music by guest fiddle maestro Kyle Dillingham.

October 4, Skirvin Hilton
The hue and the concept will both get a workout at this epic event celebrating Lyric Theatre’s 50th anniversary: “One Singular Sensation” is the theme for the annual Broadway Ball, featuring auction treasures, décor heady with gilded glory and knockout live performances from “A Chorus Line” by Lyric’s finest. Enjoy the show, and here’s to 50 more.

The (Other) Land of the Free

The Color and the Shape

October 6, Santa Fe Depot
The summer’s gone; the ceaseless music of the season is dropping into the quieter and more introspective realm of cooler weather. That means it’s time for Norman’s Performing Arts Studio to resume its Winter Wind concert series, and the first guest is someone familiar with the concept of ceaseless music: Guitarist and singer/songwriter Ari Hest is a constant conduit for sonic self-expression.

Isten Hozott to the Big Show

October 7, Armstrong Auditorium
The Hungarian State Folk Ensemble was established in 1951, which is a pretty impressive time span … but the duration of their inspiration totally dwarfs that six decades, as their colorful costumes, intoxicating music and energetic choreographies are drawn from traditions stretching back centuries. The Ensemble displays the soul of a people in an evening of spectacle – they don’t make ’em like this anymore.

October 17, Midtown OKC
That little piggy was delicious. And so was that one. And that one. Basically, bacon tastes good – and when you turn some talented metro chefs loose to create themed specialty food items, and use those to fuel a Midtown fundraiser along with drinks, music, auction items and a raffle, it’s so good they had to do it again: 6 Degrees of Bacon is back.

A Tease to Please

October 18-27, Sooner Theatre
If you’re out of work and low on funds, and your friends are counting on you, sometimes it’s simply your duty to show off your booty. And whatever else you’re packing. Dance professor Lyn Cramer choreographs and co-stars, and OU School of Drama Director Tom Orr helms the production, as the Sooner Theatre prepares to give audiences “The Full Monty.”

Joy to the Metro

October 30-November 2, Cox Center
It’s the most wonderful time of the year for people hoping to enjoy the holidays with their shopping already done – thanks to the Junior League of Oklahoma City’s massive, magnificently merry Mistletoe Market. Now in its 22nd year, the bazaar features over 125 vendors offering a vast array of gifts, seasonal décor, clothing and accessories, food, jewelry and plenty more; exploring is practically a party in itself.