Off to See the Wizard in the Myriad Gardens - 405 Magazine 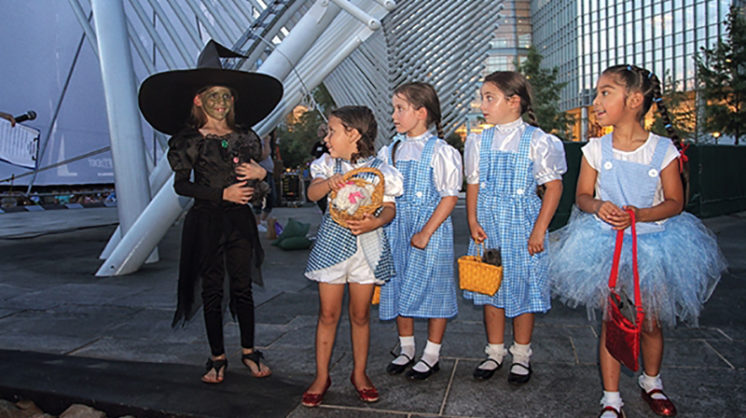 For the little girls hopping from foot to ruby-slippered foot in the creeping summer dusk of Myriad Gardens, the suspense was too much to bear.

Not only was their favorite movie about to begin on the big outdoor screen downtown, they were about to go on stage themselves for the pre-show Wizard of Oz costume contest.

Despite a kaleidoscope of movie roles to choose from, all the early contestants this July night in Oklahoma City opted to portray the same character: Dorothy Gale of Kansas.

The Wonderful Wizard of Oz was published in 1900, the first of a series of 14 novels by L. Frank Baum set in the magical kingdom of Oz and surrounding lands. It has been called the first great American fairy tale, breaking with the European storytelling tradition of a heroine waiting to be rescued, and centering instead on the adventures of a self-reliant girl who saves herself. 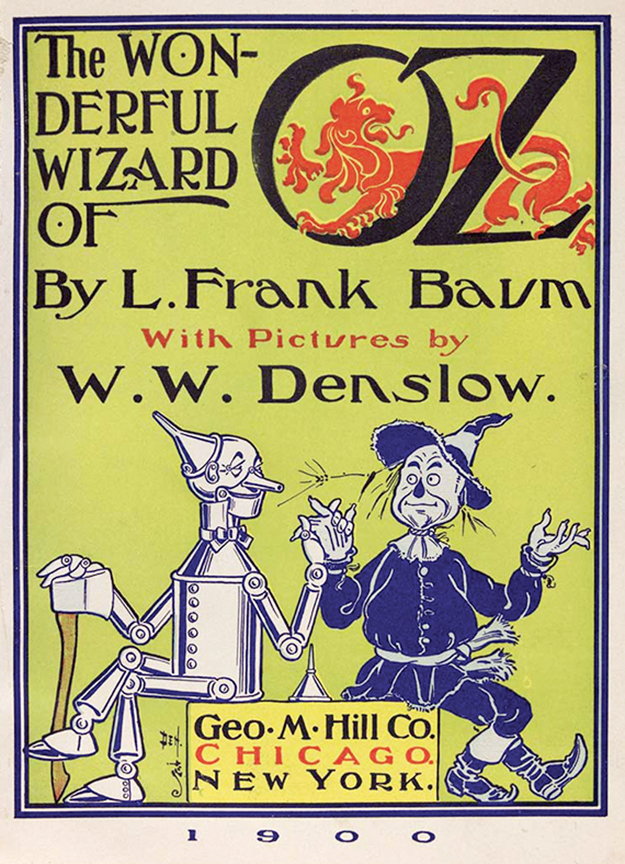 The author, born in upstate New York in 1856, was unusual for his time. A military academy dropout, actor, poet, journalist and businessman, his Nov. 9, 1882, marriage to Maud Gage – youngest daughter of noted abolitionist and suffragette Matilda Joslyn Gage – was hailed by the local newspaper as “one of equality.” In an era when the bride’s vows included a promise to obey her husband, the newspaper noted that, in the Baums’ ceremony, “the promises required of the bride were precisely the same as those required of the groom.”

Baum’s egalitarian outlook and fantastical world of Oz irked critics for decades. Some claimed the story had an “ungodly” influence on children, glorifying a headstrong girl who disobeys authority and saves three male characters on her way to destroying two evil witches and unmasking the great wizard as a fraud.

In 1928, the city of Chicago banned the Oz books from its public libraries, declaring them “not literature, but, somehow, rather evil for children.” In 1957, Ralph Ulveling, director of the Detroit Public Library, admitted the books had been outlawed in the system for 30 years, adding “There is nothing uplifting or elevating about the series.” Despite protests, he promised the library staff would “stick to our guns” – the ban was not lifted until 1972. In 1959, the state librarian of Florida ruled that the books were “unwholesome for children” and urged their removal, which led to curious children seeking them out and fueled a new surge in the stories’ popularity. In 1986, a lawsuit in Hawkins County, Tennessee, challenged the initial novel’s inclusion in public school curricula, objecting to the evils of talking animals, self-determination and “secular humanism,” and maintaining it is “theologically impossible” for good witches to exist.

If the producers of The Wizard of Oz had chosen the eighth book in the Oz series, Tik-Tok of Oz, instead of the first, the world would celebrate not Dorothy Gale of Kansas, but Betsy Bobbin of Oklahoma. Author L. Frank Baum described Betsy as shy and blonde with a pixie cut. Instead of landing in Munchkinland aboard a tornado-tossed farmhouse, like Dorothy, Betsy arrives in the Rose Kingdom after being washed ashore by stormy seas after a shipwreck.  Instead of being accompanied by Toto,the trusty dog, Betsy travels with Hank, the loyal mule. By the end of the book, Princess Ozma invites Betsy and Hank to the Emerald City to hang out with Dorothy and Toto.

But in the 115 years since the book’s publication, fans of the land of Oz have far outnumbered its detractors. In an April 9, 1957, newspaper editorial mocking Detroit’s book ban, the Toledo Blade warned: “The latest intelligence from the Emerald City is that the Wizard of Oz and the Wicked Witch of the West are about to join forces and send the Munchkin army to attack the Detroit Public Library in full force. Against such a force, Mr. Ulveling’s guns will do him no good. He will need a little imagination, of which he seems to have very little.”

The Myriad Gardens crowd has swollen into thousands of fans ready for a dose of flying monkeys, singing Munchkins, thinking scarecrows, and lions and tigers and bears. Families sprawl on blankets, teenagers hold hands and cooler-toting couples perch on lawn chairs, occupying the entire great lawn and backing up onto the hill on Hudson.

But first, the pre-show costume contest. The parade of little girls in Dorothy dresses is joined by a lone figure in black: 7-year-old Rylee Blackwell of Moore. She stands at the far end of the line, all-in with green facepaint and an oversized pointy hat, completing her Wicked Witch of the West tribute by clutching a captive Toto.

In an upset, she is declared winner over all the Dorothys.

The contestants pick their way back through the crowd to nestle in with their families as dusty clouds and a sepia-toned tornado gyrate across the screen, tossing a flying farmhouse over the rainbow. As darkness settles in across the Plains, Dorothy and Toto began their journey down the yellow brick road fortified by the brains of a scarecrow, the good heart of a tin man, the courage of a lion and the hard-won knowledge that, in the end, there is no place like home.

Editor’s note: This installment is part of author M.J. Alexander’s 77 Counties series, chronicling her travels across Oklahoma. The full series is available at sliceok.com/travel/