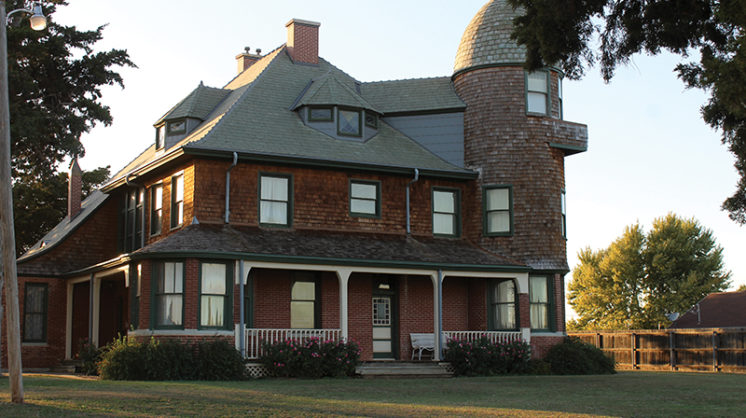 If you thought that Oklahoma’s only governor’s mansion is on Lincoln Boulevard, you’d be wrong. Kingfisher has a dog in that fight. It’s the home of Oklahoma Territorial Gov. Abraham Jefferson Seay, Oklahoma’s second or third governor, depending on how you count.

With passage of the Oklahoma Organic Act in 1890, the beginning of formal government in the Territory was established. President Benjamin Harrison appointed George Steele to the position of governor, Robert Martin as territorial secretary and, among other appointments, A.J. Seay as a justice of the Territorial Supreme Court.

The designated territorial capital was Guthrie, but the fight was on to determine the location of the eventual state capital. Guthrie, Oklahoma City and Kingfisher all were jockeying for that honor.

Steele managed to irritate all sides of the newly elected legislature and resigned in frustration before his term was up. Martin served as acting governor in the interim.

Neither of the two men had built permanent housing. When Seay learned he would be appointed to the position, he began building a three-story mansion he named “Horizon Hill” on 15 acres of land just outside of Kingfisher. Harrison made the appointment official and Seay’s term began on Feb. 2, 1892.

The mansion, which Seay occupied until 1901, is now part of the Chisholm Trail Museum complex in Kingfisher. Very few items in the home are original to his tenure, but, based on a few old photos and the recollections of descendants, the house has been outfitted in appropriate period style.

Visitors enter through the back door. First floor rooms include a front and back parlor, study, dining room and kitchen. The front parlor was used for formal entertaining and contains several Seay pieces – a rose velvet settee, a fainting couch, a small music cabinet that was possibly a gift from the governor’s brother and a couple of paintings by family members.

In the study across the hall is the governor’s official chair and several other pieces of office furniture. On his bookcase stands a photo of Seay taken when he served as a Union soldier during the Civil War.

Seay never married, but his widowed sister Isabella lived with him and served as his hostess. Her upstairs room has large windows with lace curtains, as she described in a letter she wrote.

Only the governor’s washstand/commode is original in his bedroom, but the red carpet reflects a reminiscence of one of his nephews, “ … elegant red carpeting and big furnishings.” Red was apparently a favorite color of the governor.

The Victorian Shingle-style structure features large porches and a dome-topped turret. The mansion as a whole falls short of the elegance one would expect in such a building, but, considering the times and the location, it was very impressive. And while the road to statehood took the Capitol to OKC, the former home of the territory’s governor remains a worthy Kingfisher destination.

The Chisholm Trail Museum and Governor’s Mansion are located at 605 Zellars Ave. in Kingfisher. Hours are 10 a.m. to 5 p.m. Monday – Saturday. Admission is $5 for adults, $4 for children.