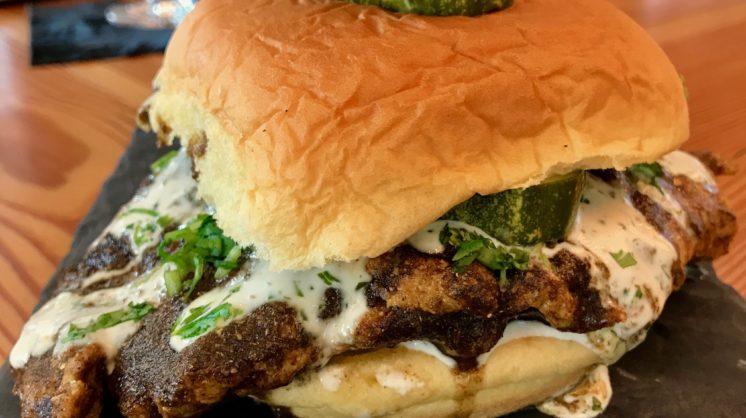 In some ways, it’s just a sandwich: fried chicken, pickles and ranch dressing on a potato roll. However, Chef Jason Campbell’s OKC Hot Chicken Sandwich is likely to spark a conversation about Oklahoma cuisine.

“I just wanted to make a good sandwich that reflected the flavors of this area,” Campbell says of the new dish on the bar menu at Mary Eddy’s at 21c Museum Hotel. “Nashville hot chicken is delicious, but we’re Oklahoma City. I asked myself what a hot chicken sandwich from OKC should taste like.”

His answer is absolutely delicious, and the spice rub features a local favorite flavor: Hatch green chile powder. Is that local, though? Isn’t that a New Mexico thing?

“Green chiles grow in Oklahoma, too,” Campbell says. “They’re incredibly popular all over the state, and since I’ve come here, they’ve become some of my favorite ingredients.”

Campbell came to Oklahoma City from Cincinnati, but he is a Florida native. His Gulf States style of cooking has earned him 405 Magazine readers’ Best Chef title two years in a row, and Campbell is very familiar with hot chicken, having worked in a Nashville hot chicken restaurant in Orlando for a couple years as a young chef.

The technique is what matters with hot chicken, and just like the Nashville style, Campbell is roasting the spice mix in hot grease. His chicken sandwich starts with a five-ounce chicken breast pounded flat, then dredged twice in a mixture of flour and cornmeal. Hot grease is added to a mixing bowl containing his spice mix, which contains six ingredients … although he’ll only give us three: green chile powder, sugar and cumin. The grease roasts the spices, then the freshly cooked chicken is rolled in the spice paste to create the famous hot crust.

The sugar creates balance in the spice mix, making the heat about a three out of five, which is within the comfort range for most people. Campbell – who’s eaten at the original hot chicken joint, Prince’s in Nashville – said balancing the heat is the most important part of the spice blend. Beyond that, the ranch was an easy choice; this is Oklahoma, after all. Mary Eddy’s house-made ranch has 16 spices and seasonings, making it one of the most flavorful dressings around. The pickles are also house-made, brined three days in a lime-agave brine.

“I used a potato roll because people tend to overthink buns,” Campbell says. “Buns are just a vehicle to get the chicken to your mouth, and the potato bun is perfectly squishy, stands up to the task, and even adds a little tang.”

The experiment has already begun in the bar; the next step is brunch and lunch menus. For now, Campbell is taking feedback from guests about the flavor profile. He’s certain to get more local feedback from other chefs, too. After all, while most Okies tend to agree that chicken fried steak, ranch, and biscuits and gravy are Oklahoma cuisine, which flavors define Oklahoma style?

“Oklahoma City is a great city, so let’s make this style totally ours,” Campbell says. “We don’t need to be any other city or like any other place.”

Okies around the state will agree heartily with that statement. We are not Nashville, or Austin, Portland or Seattle, and we don’t have to be. There is much here to love, and Campbell is doing our state a favor by initiating a culinary conversation about what defines Okie style.