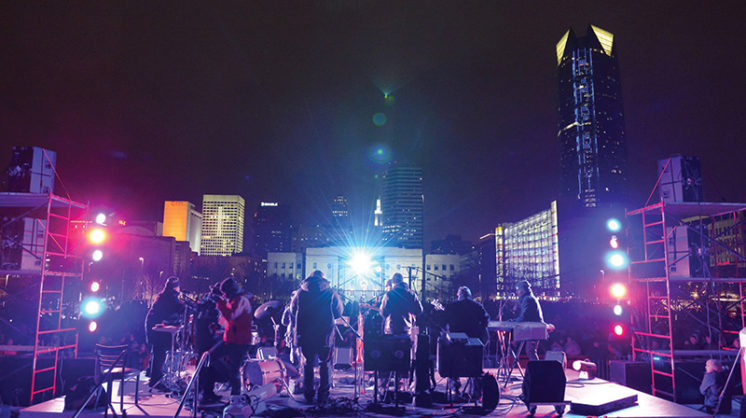 At the stroke of midnight on Dec. 31, the new century will be old enough to drive, and Arts Council OKC is getting ready to hit the gas on an evening of outstanding entertainment. Want to end 2015 on a high note and start the new year off with a bang? Get downtown for Opening Night.

A few laughs, a touch of magic, masses of music, the company of tens of thousands of your friends and neighbors and a pyrotechnic spectacle to top it all off … it’s no wonder this is one of the metro’s favorite celebrations, as seen when more than 75,000 Oklahomans of all ages shook off the winter chill to revel and ring in 2014.

The festivities are slated to run from 7 p.m. to midnight on Dec. 31, filling the year’s final hours with entertainment for all. Kids can create festive art projects inside the Civic Center Hall of Mirrors; live performances include a magic show, unicycle stunts and the impromptu comedy of OKC Improv; and some of the city’s most enthralling musicians such as Edgar Cruz, Tequila Azul, Urban Addiction and Shortt Dogg are set to rock out the clock. As the midnight hour approaches, OKC will brace itself for jubilation as the traditional Opening Night ball rises into the sky and one of the state’s largest fireworks shows sets the night alight.

An Opening Night wristband allows attendees into all the venues; it’s $8 in advance or $10 at the event, with children 5 and younger admitted free. Find out where to get one and more about the event (including details on the preceding Finale 5k race) at artscouncilokc.com, and get set to ring in 2016 right.