Oklahoma Stays Under the Mistletoe - 405 Magazine 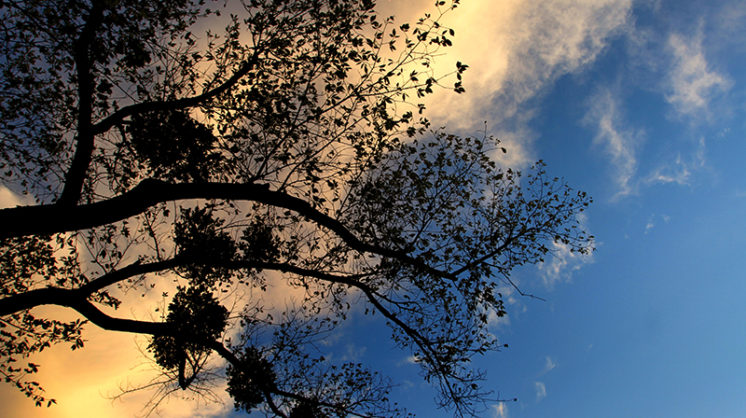 Inspired by tough times on the frontier, a hardy parasite became – and remained – an unlikely state symbol

It was the tale told of dead pioneers, laid to rest beneath the frozen red earth in graves unadorned, that won the argument.

Lawmakers of the Second Territorial Congress, meeting in Guthrie in 1893, were debating which flower should represent Oklahoma Territory at the Columbian Exposition in Chicago, set for later that year. The event would showcase nearly 50 nations plus all 44 American states (and territories), and be remembered for the innovations introduced to millions: the zipper and the automatic dishwasher, Cracker Jack and Wrigley’s gum, fluorescent lights and the Ferris wheel.

The Territory wanted to put its best foot forward. What flower would best represent a place that most fair-goers had never visited? Daisies were suggested. So were forget-me-nots. The passion flower. American Beauty roses.

But the youngest legislator, a 27-year-old ’89er originally from Tennessee, made the case for a different sort of symbol. John Wimberly of Burbank talked of the bleak first winter after the Land Run of 1889. He spoke of how cold descended on the plains, and how “northers (cold north winds) swept down off the Flint Hills with a sting like a metal filing at the end of a bullwhip; how the soddies (sod houses) trembled and leaked and many folks died.” There were no flowers to decorate the graves of the fallen.

In the frigid winter, mistletoe was a rare flash of color in a sea of gray. Huge clumps perched high on the barren branches of trees, their waxy green leaves forming orbs as big as a bushel basket, some clusters weighing as much as 100 pounds. The mistletoe was used to decorate the graves of settlers that first winter in the former Unassigned Lands. The mistletoe represented Oklahoma Territory’s hardy spirit, appearing brightest when conditions looked grimmest.

Unlike other blooms chosen for display at the Chicago World’s Fair, the green leaves and white berries remained controversial.

It was not just that the plant was less flashy than the Kansas sunflower, the Texas bluebonnet or the magnolia of Mississippi. There was the matter of mistletoe being a parasite, surviving by sinking its tendrils beneath the bark to draw water and minerals from within its host. Its genus name – Phoradendron – translates as “tree thief.” 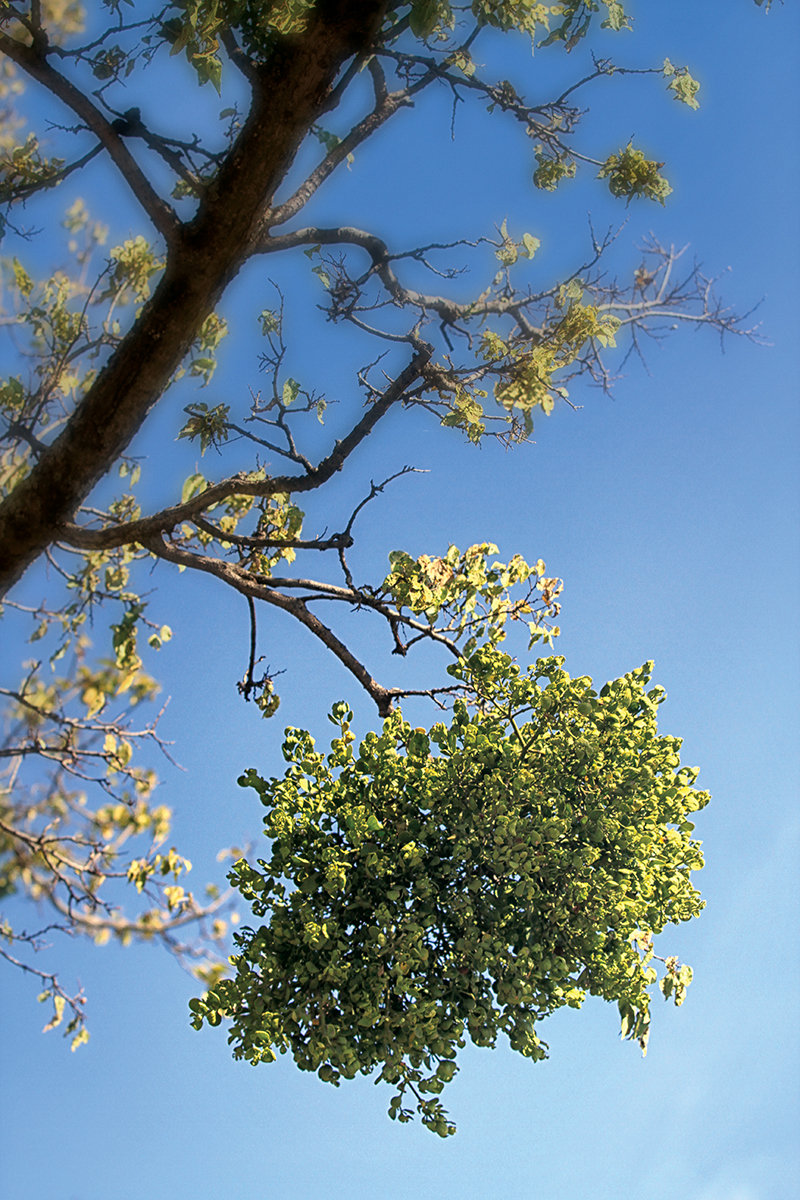 Detractors called it a fitting plant for a land once promised to tribal nations and then taken back and redistributed. Proponents embraced the romance and the legend of mistletoe, and its role in the history of the new territory.

In 1906, publisher George Riley Hall of Henryetta waxed poetic about the plant and what it represented, ending his multi-stanza ode to Oklahoma with:

But detractors remained. William “Alfalfa Bill” Murray – who would become Oklahoma’s ninth governor, and father of Johnston Murray, the state’s 14th governor – lobbied for the alfalfa blossom to be named the official flower. In 1906, he wrote: “Who, indeed, would desire to adopt for a state flower, a parasite? Let greater Oklahoma be known as the ‘Alfalfa State.’” The Daily Oklahoman agreed, later penning an editorial that argued, “The alfalfa blossoms are pretty; they enrich the scenery. … It is the crop which brings riches to the state; it is a crop which means more to the future than any other crop. Alfalfa blossom – the state flower. It should be adopted.”

But after statehood, Jon Golobie – an ’89er elected to the state Senate – again evoked the memory of mistletoe marking pioneer graves in order to collect enough votes to maintain its place of honor.

Over the years, Oklahomans suggested more alternatives. A 1938 report out of Enid recounted, “Miss Laura Crews, pioneer Oklahoma woman, has voiced her disapproval of the mistletoe as the state flower. She proposed to Mrs. J.R. Weldon, president of the Oklahoma Association of Garden clubs, that the yucca be made the state flower. … The yucca is as typical of Oklahoma as the sunflower in Kansas, and like the hardy pioneers, is unaffected by heat and drouth (drought).”

As debate flared now and again at the Capitol, The Daily Oklahoman noted wryly on May 20, 1941, “They tell us that the ‘cowboy rose’ is not a parasite and that our hitherto state flower, the mistletoe, decidedly is parasitic. It is somewhat surprising though that any political body should suddenly become allergic to parasites.”

In a 1961 letter to the editor, Mrs. G.H. Hall of Tulsa argued for keeping to tradition. “Surely this lowly mistletoe served well in a time of great need, and let’s see that it is kept as the official state flower of Oklahoma.”

Ruby Shannon of Anadarko agreed, noting in 1967, “Few people seem to know the who, what, where, when and why of this emblem, and some Johnny-Come-Lately is forever trying to set the state Legislature to change the mistletoe to a more ‘respectable’ flower. When I read accounts of this, it makes my gorge rise.”

As arguments continued over the years, Rep. Kelly Haney – who would go on to sculpt The Guardian statue for the top of the future Capitol dome – introduced House Bill 1649 to name the Gaillardia, aka the Indian blanket, as the state’s official wildflower. The declaration was passed into law in February 1986.

Other lobbyists and lawmakers tried and failed to unseat mistletoe as a state symbol. In 2000, a column by the editorial board of The Daily Oklahoman contrasted the lowly mistletoe with the official state tree, the beloved redbud. “When you see mistletoe in December, you are seeing a parasite. When you see a redbud in late March, you are seeing paradise.”

But, more than a century after Wimberly’s speech, a truce was on the horizon for the mistletoe wars. 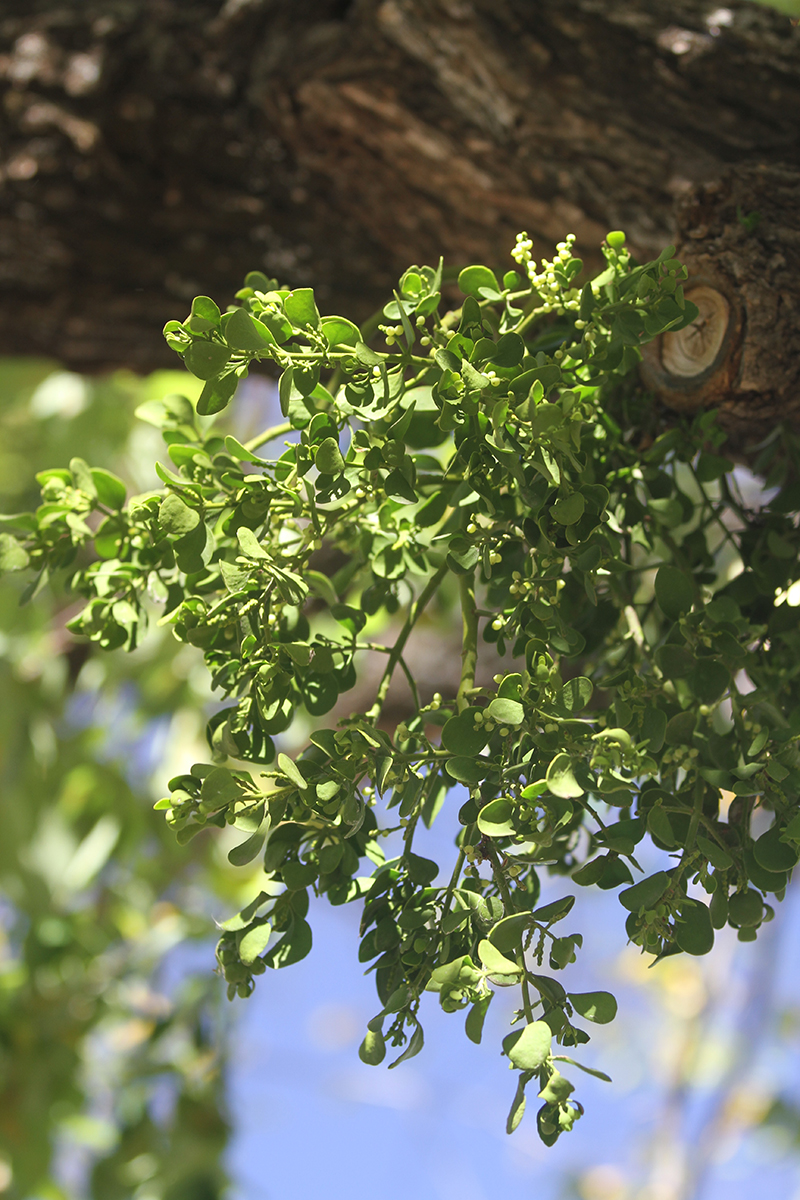 Civic activist Dottie Hart Weissenberger would devote half of her life to campaigning for a new, more traditional state flower. As president of the Oklahoma City Council of Garden Clubs – and lobbyist for gardeners longing for an official flower to cultivate – she championed a fragrant, dark red tea rose developed at Oklahoma State University by Herbert Swim and O.L. Weeks.

The flower was introduced in 1964 at the New York World’s Fair. Its name: the Oklahoma Rose.

For decades she lobbied for the Oklahoma Rose, and spearheaded the planting of 500 bushes of the flower on Capitol grounds. Her campaign would make progress, and then fail time and again.

Sen. Gilmer Capps, who sponsored her quest at the Capitol, reached for the hybrid rose’s connections to Oklahoma history, noting that its five ancestor plants “reflect Oklahoma’s Five Civilized Tribes” and that the bloom typically proceeds between 45 and 55 petals, “in line with Oklahoma’s admission as the 46th state in the union.”

But the argument that may have helped most was the observation that, when it came down to it, mistletoe wasn’t really the state flower. It was the state’s floral emblem.

Officially, Oklahoma did not have a state flower.

With the Indian blanket declared state wildflower and the redbud the official state tree, why not keep the mistletoe as floral emblem and declare the Oklahoma Rose the state flower?

And so it came to pass. Gov. Brad Henry signed the bill announcing “The Oklahoma Rose shall be the official flower of the State of Oklahoma” into law on April 13, 2004. He recreated the signing two weeks later, so Mrs. Weissenberger, then aged 80, could be part of the festivities.

She died nine years later and was laid to rest at the Hobart Rose Cemetery, near her hometown of Lone Wolf. Under wintry November skies, the official state flower – the Oklahoma Rose – was placed on her grave.

The Oklahoma ’89ers were not the first to weave tales around mistletoe. For centuries, legends of blessings and curses were ascribed to the plant. Shakespeare wrote of “the baleful mistletoe,” alluding to the Norse story of the death of Odin’s beloved son Baldur, god of justice and light, who was felled by a sharpened sprig of mistletoe. In Brittany, the plant is called Herbe de la Croix, after a legend that claims mistletoe was once a tree that provided the wood for the cross of Jesus, and was reduced to living as a parasite in punishment.

Others considered the plant sacred. White-robed Druids are said to have followed visions during particular phases of the moon to find mistletoe in sacred oak trees, where it was carefully cut with a golden knife. Some ancients believed the evergreen orbs housed the souls of deciduous trees through the brutal winter. With the coming of spring, the tree’s soul would seep back from the ball of mistletoe and return to resurrect leaves.

The plant itself was considered powerful enough to heal diseases, ban evil spirits and make peace between enemies who happened to meet beneath it in the forest. The belief inspired the custom of suspending mistletoe over a doorway as a symbol of good will … and an encouragement for kissing.