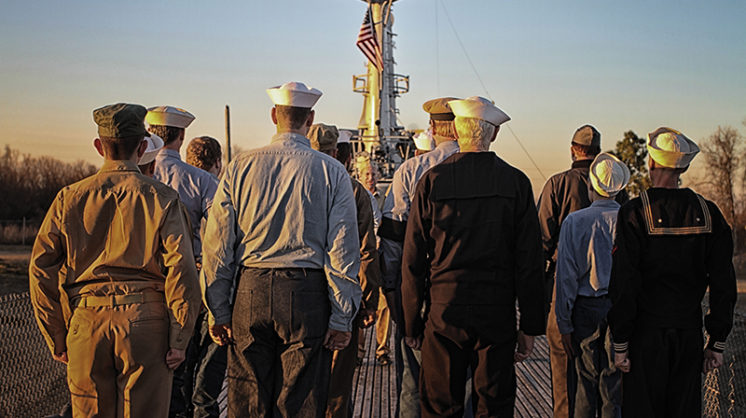 The flashing light pulsates near Exit 33, its dots-and-dashes signaling in Morse Code to passersby on the Muskogee Turnpike from the top of Oklahoma’s only submarine.
W-E-L-C-O-M-E  T-O  T-H-E  U-S-S  B-A-T-F-I-S-H.

The USS Batfish – a battle-tested World War II submarine stretching longer than a football field and weighing 1,800 tons – has been welcoming visitors to its drydock in Muskogee for 44 years.

It has spent far more time planted in the former soybean field near the Port of Muskogee than it did plying the ocean. But during its months at sea, on patrols of the South Pacific from 1943 through 1945, the Batfish became known for its deadly accuracy. The vessel – billed as “the champion submarine-killing submarine of World War II” – destroyed a record 14 enemy vessels, including a record three Japanese subs within 76 hours in February 1945.

Even so, after the end of World War II and a stint as a training vessel, the Batfish was deactivated and doomed to be sold or cut up for scrap.

A group of veterans, however, had a better idea for the old submarine that had helped win the war. The national organization of U.S. Submarine Veterans sought to establish a memorial in every state to honor the 52 American submarines and their 3,505 sailors lost in battle.

Oklahoma’s Sub Vet chapter began pondering a submarine for the state in 1962. Over the years, the idea gathered steam and political support, including sponsorship of a bill by then-State Sen. James Inhofe that proposed accepting the donation of a submarine for permanent display in Oklahoma.

“People coming through are always looking for the connection between the Batfish and Oklahoma,” says Brent Trout, director of the Muskogee War Memorial Park that is the submarine’s home. “But there is no connection. Some men had a dream to honor their lost friends. People at the time said they were kooky – but they made it happen.”

After much deliberation – including considering adopting the USS Sea Dog, the USS Piranha or the USS Cavalla – the Batfish was chosen, based upon its unbeatable battle record and relatively solid condition. The U.S. Congress approved the transfer of ownership to the state on Nov. 8, 1971. 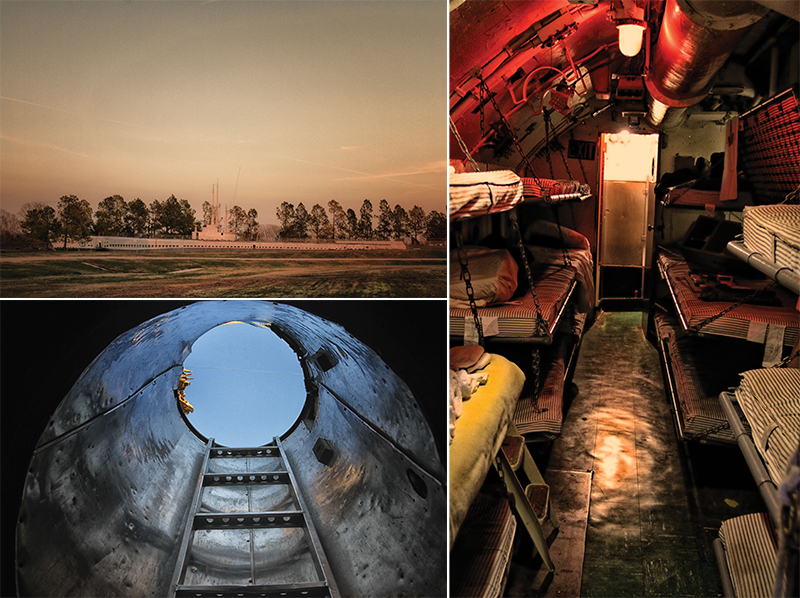 The naval magazine Warship International celebrated the renowned sub’s rescue from the scrap heap with a multi-page feature and the headline “BATFISH Beats the Boneyard.”

But the sub still had to get to Oklahoma. The logistical nightmare entailed a seven-week, 1,350-mile tugboat tow from New Orleans through the newly completed McClellan-Kerr Arkansas River Navigation System, which linked inland ports to the Gulf of Mexico.

The Batfish was cradled on steel straps strung between six barges – each 120 feet long and 32 feet wide – to lift the submarine high enough to reduce its draft through the water.

Headaches along the way included cost overruns and financial woes; a rogue wave from a speeding British ship that sank one of the accompanying barges; and lowering the water level of the Arkansas River by three feet to squeeze beneath a bridge in North Little Rock.

Once it arrived at the Port of Muskogee, heavy flooding caused the Batfish to tilt nearly 40 degrees and tug at her cables so violently that some feared the new downriver bridge across U.S. 62 would be crushed. Frustrated, the state tried to return the submarine to the U.S. Navy, which declined the offer. For better or worse, the Batfish truly belonged to Oklahoma.

Adjustments were made, problems were solved, and at last a trench one-quarter mile long and 120 feet wide was dug from the main channel at River Mile 393.8 to Muskogee’s donated land, near the confluence of the Arkansas, Verdigris and Grand rivers.

Four bulldozers pulled her into place with steel cables, while a tugboat pushed from behind. On July 4, 1972, the Batfish, still in her temporary mooring, was unofficially opened to the public. The official opening was Memorial Day weekend, 1973. 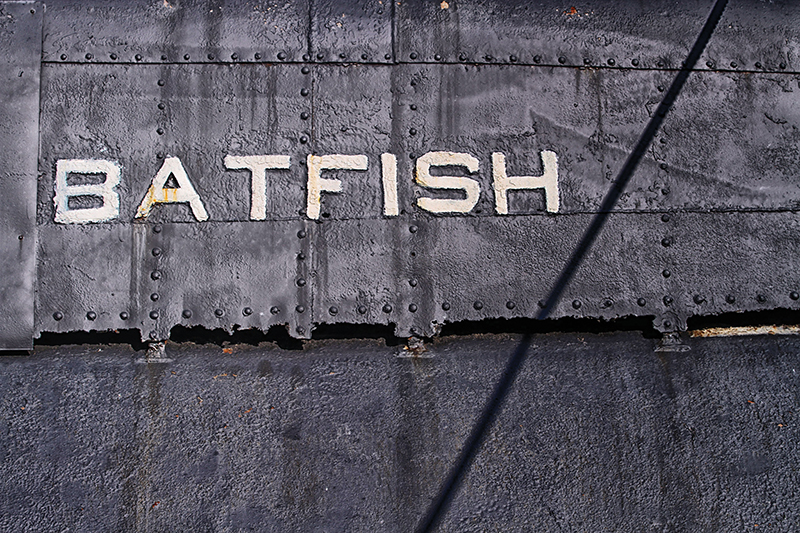 In the decades to follow, the submarine would evolve from a relic from a pivotal war to an integral part of the community of Muskogee.

At the heart of the city’s eight-acre War Memorial Park, which features veteran tributes, a small museum and the largest surviving piece of the USS Oklahoma, the Batfish has been primed, painted and polished. Its interior has been restored by a crew of volunteers who have tracked down and re-installed big items like bunks and brass instruments and torpedoes, as well as telling details such as Betty Grable pin-ups and 1944 calendars, as well as authentic dishes and glassware in the galley.

The Batfish hosts field trips, sleepovers, twice-yearly living history days, ghost tours, veteran reunions … and before he moved to Arizona in 2014, the wedding of former director Rick Dennis on its deck. He was succeeded by Brent Trout, who is working to keep the legacy alive. His philosophy: “Instead of making it a temple, we think of it as a forum.”

More than 32,000 paying visitors visited last fiscal year, pondering the submarine and the tributes to iconic fighting machines from World War II and the men who manned them. The Batfish crew reunions have tapered off as veterans have passed on, but new generations have ensured that their legacy remains.

Sometimes around dusk and dawn, when the fog ebbs in from the river and envelops the USS Batfish and its blinking signal, the submarine appears afloat once more, patrolling in a sea of grass beneath an ocean of sky.

The USS Batfish is one of 25 submarines open for touring in the United States. Its nearest neighbor is the USS Razorback, a fellow Baleo-class submarine that was sold to Turkey – which operated it as the TCG Muratreis, from 1971-2001. The vessel was purchased by the city of North Little Rock in 2004 for $37,500 and made a similar journey to the Batfish, traveling up the Arkansas River to reclaim the name Razorback.

The USS Batfish was on active duty from Dec. 11, 1943, to Aug. 26, 1945. The second commissioning crew operated the Batfish from March 1952 until May 1957. The Batfish successfully completed more than seven war patrols during World War II; early patrols typically required 65-70 men, while later patrols required up to 88. The Batfish was reactivated in 1952 as tensions increased during the Cold War, primarily serving as a training vessel out of Key West.

Members of the crew serving aboard the USS Batfish’s 6th War Patrol were honored with the Presidential Unit Citation, which read: “For extraordinary heroism in action against enemy Japanese combatant forces during the sixth War Patrol in the South China Sea from December 30, 1944, to March 3, 1945. Persistent and aggressive in her search for vital targets, the USS Batfish relentlessly tracked down the enemy and in three separate, brilliantly executed attacks, launched her torpedoes with devastating speed and skill and demolished three Japanese submarines. By the destruction of these formidable and threatening hostile Fleet units in a single War Patrol, the Batfish contributed significantly to the successful completion of the war. The courage, superb seamanship and gallant fighting spirit of her officers and men reflect the highest credit upon herself and the United States Naval Services.”

Brent Trout, executive director of the Muskogee War Memorial Park, dispels the persistent tale that the USS Batfish ended up in Muskogee only after it couldn’t maneuver the bends in the river on the way up to Tulsa. “Well, funny story about this. The myth has perpetuated for many years that the Batfish got stuck going around a turn and couldn’t make it to Tulsa. The truth is, Tulsa did not offer any donated land. The Oklahoma Maritime Advisory had completely spent their entire budget purchasing the submarine and could not afford to acquire land in Catoosa. Muskogee was not even the next choice. The Corps of Engineers had shown them other spots throughout Oklahoma, but each one had more problems or were undesirable.”