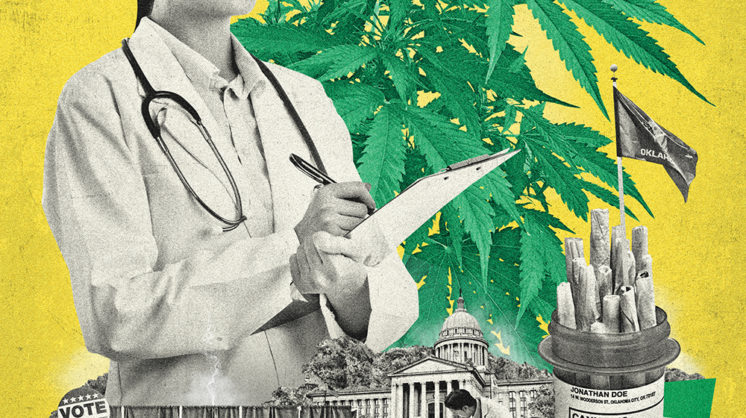 Oklahoma will vote on legalizing the use of medical marijuana on June 26, but with less than a month to go before the vote, many of the details are still unclear. State Sen. Ervin Yen (R – Oklahoma City), who is an anesthesiologist by profession, said he is not supporting State Question 788 because he believes it permits recreational marijuana usage.

SQ 788, if passed, will legalize “the licensed use, sale and growth of marijuana in Oklahoma for medicinal purposes.” The verbiage, which led to a failed lawsuit by former Attorney General Scott Pruitt, is straightforward, but opponents believe it is intentionally vague.

“The language allows for marijuana to be recommended for any reason,” Yen says, “and medical professionals are not restricted to M.D.s and D.O.s. Any doctor could make a recommendation, and I think that’s inappropriate.”

“I think there is good research that indicates marijuana is appropriate treatment of some conditions.”
– State Sen. Ervin Yen

Who Can Approve, and Why

Marijuana is a Schedule I drug according to federal statute – a category that includes heroin and cocaine – so doctors cannot issue a prescription for it, but can make recommendations. If SQ 788 passes, doctors would need a liability waiver to issue recommendations.

“If the question passes, we will have several areas of concern to clean up,” says Rep. John Paul Jordan (R – Yukon), the author of HB 3468. “My bill includes a waiver of liability for doctors, so they can get malpractice insurance. I’m also trying to get the oversight changed from the department of health to a Cannabis Commission that is defined in the bill. The authors of the state question could not have predicted all the problems we’re having with the state department of health.”

“I think there is good research that indicates marijuana is appropriate treatment of some conditions,” Yen says. “Treatment for seizures is definitely indicated, as is use in palliative care – for patients with less than one year to live.”

1. Neuropathic pain resulting from trauma to the body that leads to nerve damage, and pain related to diabetes;

3. Nausea and vomiting that is unresponsive to traditional treatment, especially as a result of chemotherapy;

4. Chronic wasting disease, such as those seen in AIDS or some cancers.

Brandon Isaak is an audio engineer and music producer in Oklahoma City. While a resident of Washington, D.C., he used medical marijuana as part of his treatment. Isaak is in favor of 788, and opposes Yen’s proposed legislation; he also lives in the senator’s district.

“I felt my liberties were more respected in D.C. because D.C. trusts its doctors and patients to decide their own course of treatment, instead of having politicians dictate health care decisions,” Isaak says. “The theme here is that Senator Yen wants to supersede the will of the people – if the question passes – by rewriting 788 with his own legislation.”

“I’m not sure why we have such a negative view of marijuana when our views are not consistent with the way we view alcohol.”
–  Jon Middendorf

Jordan’s bill also restricts the right to recommend to M.D.s and D.O.s. “We can’t write bills that directly contradict the verbiage in the state question,” Jordan says, “but we can define who the medical professionals are. State Question 788 was never intended to expand the scope of who is a medical professional.”

Neither Yen nor Jordan seem opposed to medical marijuana in theory, but both are pushing for much more clarity in definitions and categories. Proponents such as Isaak, however, see an attempt to make the process so restrictive that very few people would actually qualify.

Beyond the issues of definitions, though, is still the question of whether the state question can even pass. Oklahoma – and this almost goes without saying – is a state deeply committed to religious identity, and fundamentalist and evangelical Christians have long shown antipathy to intoxicants of all kinds, including marijuana. With Republicans at the state and national level showing a shift toward accepting at least medical marijuana, will the bulk of voters also shift that direction?

Jon Middendorf is the senior pastor of OKC First Church of the Nazarene, which is part of a denomination that is opposed to the consumption of alcohol, to say nothing of marijuana. Middendorf has been a volunteer chaplain in the Oklahoma correctional system for many years, and is now on the OKC Chamber of Commerce Task Force to reform the county jail and the corrections system. He does not come from the perspective of someone who advocates for recreational usage, and he is not sure that evangelical clergy or their parishioners are shifting, but he is a proponent of decriminalization and medical marijuana.

“I’m not sure why we have such a negative view of marijuana when our views are not consistent with the way we view alcohol,” Middendorf says, “but as a chaplain in the system for eight and a half years now, I do know how damaging it is to individual lives and communities to flood our prisons with people who are convicted on marijuana charges. We are subtracting important people – fathers, mothers, siblings, etc. – from their communities for marijuana charges. I think there are benefits to those communities in decriminalization.”

While SQ 788 is not focused on decriminalizing recreational marijuana, proponents see it as a step in the right direction. First, though, the question has to pass … and for what it’s worth, Yen and Jordan – both conservatives – do not agree on the legislation either. Yen said he believes Jordan’s bill is too much “in lockstep” with 788, so the process of clarifying and defining is likely to take a long time even if the question does pass.