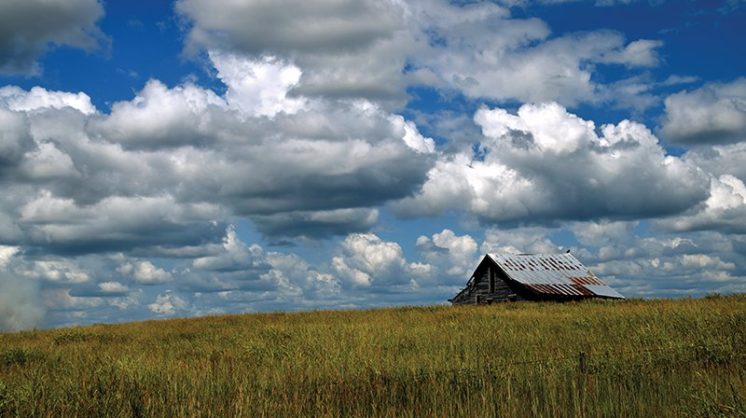 “Julia Roberts slept in the same bed you did last night,” says Cathy Ross, owner of The Mabelle Bed and Breakfast, as she hands me my morning coffee. The Mabelle’s kitchen window bestows a mesmerizing sunrise view of Osage County’s rolling grassland, which, ultimately, leads 20 miles north to the Tallgrass Prairie Preserve, one of the region’s primary attractions and the state’s most awe-inspiring ecosystems.

“I beg your pardon?” I ask, not recalling the Oscar winner being on television, let alone in my bed the previous evening.

“In the movie August: Osage County,” she says, clarifying with a subtle smile. “They used your bed as set dressing.”

I follow Ross from the kitchen into the living room, a spacious, beautifully furnished gathering space that houses an impressive art collection, an extensive library and a grand player piano. “They used all kinds of things from here for that movie,” she says. “This house … this whole town … has so much history.” And she is right.

The Mabelle is a stately four-bedroom home built in 1992. It sits above the Osage Hills and is a stone’s throw from the impossibly charming northeast Oklahoma town of Pawhuska.

Ross, who also owns local interior design business Gray Dog Designs and is a candidate for the District 36 House of Representatives, turned her estate into a bed and breakfast in 2015, and relishes the opportunity to share her deep love for Pawhuska.

“We are a town with more than 80 buildings on the historic register, whose history is made up of the Osage Native Americans, cattlemen and the oil industry,” she says. “And really, we have some very nice people here too.” 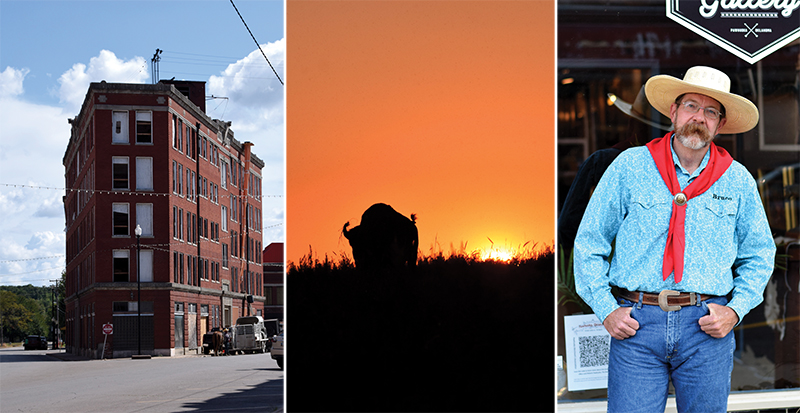 The Tallgrass Art Gallery features more than 30 Western, wildlife and Native American artists including renowned painters, sculptors and photographers. “It’s the rolling hills, the cross timbers and, of course, the sunsets that inspire artists,” says owner Bruce Carter about the area. “We have the best sunsets in the world.”

Specializing in boots, tack and cowboy hats, Osage Outfitters is the area’s premier location for western wear. But besides selling practical wares for the working cowboy, it’s also an upscale western boutique for women and features Oklahoma-made jewelry, as well as cookbooks personally signed by Ree Drummond.

Located next to Osage Outfitters, Town Maker is a business incubator made up of booths featuring several local vendors offering everything from apparel to handcrafted home décor and furniture. It’s designed to help fledgling entrepreneurs get a start so that they might one day occupy a storefront on Pawhuska’s main drag. 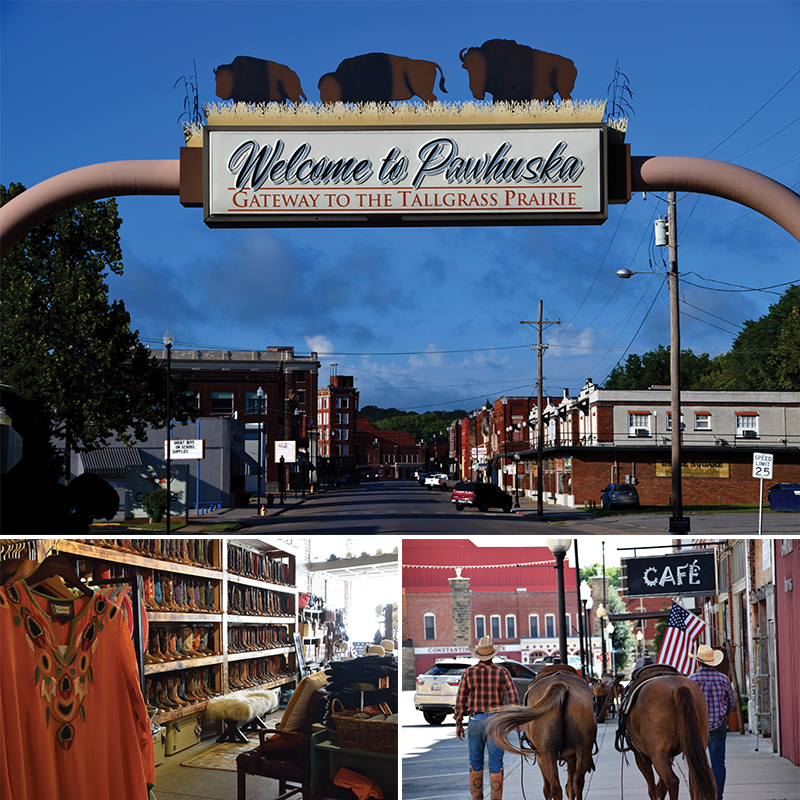 With more than 25,000 visitors annually, the Tallgrass Prairie is the area’s largest attraction. Rolling hills, walking trails and nearly 3,000 bison make up one of the last remaining prairies in the world. Tallgrass also boasts a visitor center located in the area’s historic ranches.

Perhaps no one has influenced Pawhuskan culture quite like the Osage, and the museum honoring the history of this Native American tribe is not to be missed. Featuring art, artifacts and interactive exhibits for children, the Osage Museum is one of Pawhuska’s treasures.

Given that Pawhuska is a cattle town, it seems only appropriate that diners might be able to tuck into a world-class steak, and Grill 125 is the place to do it. Just off Kihekah, on Route 60, the steaks at Grill 125 give Cattlemen’s a run for its money.

Julia Roberts is not the only celebrity to sleep in Pawhuska: Ree Drummond, better known as The Pioneer Woman, also calls Pawhuska home and plays a vital role in its downtown renaissance. With Drummond’s help, Ross and other Pawhuska visionaries are rapidly turning one of Oklahoma’s most distinctive historic downtowns into an artist incubator and cultural hub.

This fall, Drummond will open The Mercantile, which will be a deli, grocery and gift shop designed in the spirit of The Pioneer Woman. The Mercantile is only one of several projects that Drummond has slated over the coming years; others include a bakery and high-end steakhouse. While the Pioneer Woman’s brand will most certainly bring people into town, once here, there are dozens of ways to experience Pawhuska’s infectious small-town spirit and cowboy charm.