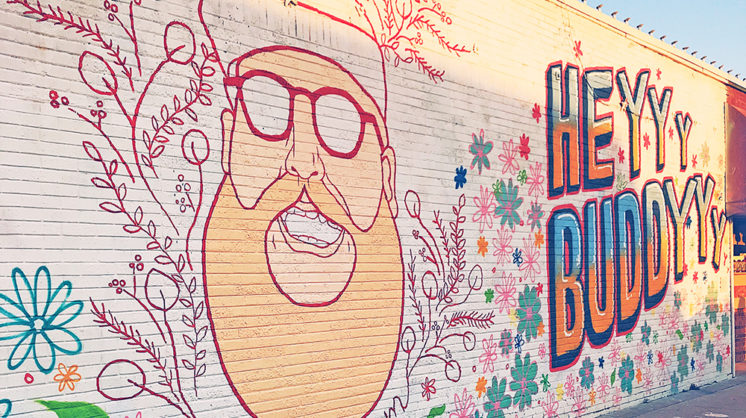 Plaza Walls opens a new season of revolving art with a memorial mural, dedicated to a much-loved local of the Plaza District and decorated by his friends, family and supporters.

Ezra Blüm was a favorite face in the Plaza District, a champion of the Plaza Walls project and supporter of local artists. Shortly after getting married, he discovered he had an inoperable brain tumor and brain cancer, and died in January at the age of 36.

Friend and artist Amanda Weathers says, “Ezra was the kindest person I ever knew. From the moment I met him, he treated me like an old friend.

“Ezra was a big supporter of local artists. He even shot his wedding photos in the Plaza Walls. We feel his loss deeply in the Plaza District. This project is special because we knew how passionate he was about local art. I think he would be really excited to have a mural made for him by the artists he knew.”

Local artists Tanner Frady, Kris Kanaly, Sean Vali, Ashley Viking, Amanda Weathers and Lindsay Zodrow created the mural, which is a picture of Blüm complete with his favorite line, “Hey, Buddy,” next to it. On March 10, friends and family are invited to come and see the mural on the wall of Bad Granny’s Bazaar and help decorate it with paintings of flowers from 1-4 p.m. The mural will be displayed until May.

Meanwhile, Tulsa artist CODAK Smith will begin work on the Saints Wall on March 9, at Saints Pub on NW 16th. Brandi Guthery from Plaza Walls says, “CODAK employs the subtle use of color intermixed with line work that has been described as muscle stretched across bone and malevolent ivy.”

Artists Bson, Dust1, Rhak, Slomoe, Uhoh and Yeehaw Pizza will paint the Everything Goes Wall on March 24 as part of the Milk Crate Jam, hosted by Oklahoma Mural Syndicate. Featuring local DJs Nymasis and The Moneymaking Jam Boys, emcee Studdabudda and dancers from Everything Goes and an open call for breakers will round out the hip-hop jam.